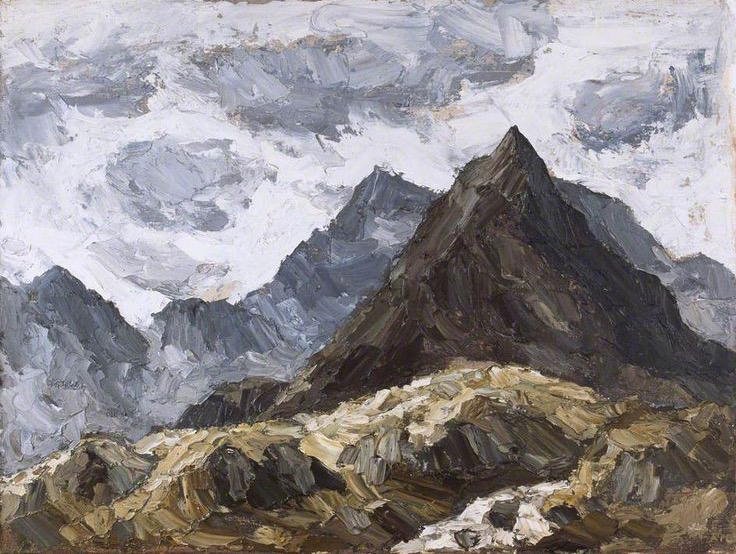 I finished off the foreword to a forthcoming book about Cynefin in Japanese a day or so ago. I wrote it in a fairly discursive and personal form and thought it might be useful to share it here. I’ve illustrated the post with two pictures by the great Welsh painter Kyffin Williams from whose work I got the idea to use the name. I wrote the material fairly quickly once I finally got started. in a sense aspects of the story needed to be told and while it is not a full history it is an overview.

Cynefin as a framework has its origin in knowledge management, in part as a reaction against Nonaka’s SECI model and was initially stimulated by Boisot’s I-Space. The SECI model focused on tacit to explicit knowledge conversion running through four transitionary states. Observation and participation is a form of socialisation [S] allows for externalisation [E] of knowledge (from tacit to explicit) and its consequent codification [C] would then allow internalisation [I], namely the conversion of explicit knowledge to tacit. The constant flow over those spaces was designated as the knowledge creation spiral and was used to explain the process of idea conversation into products mainly in the manufacturing sector. It later became known as BA. At the time I had just started working for IBM and was observing the way in which informal networks and communities were critical the effective functioning of the formal or explicit system. I was also being asked to codify material into the IBM intranet so that other colleagues could use the material without my engagement. Now this created significant issues. Firstly (adapting a phrase from Polanyi) I always know more than I can say, and I will always say more than I can write down; in consequence codification involves significant loss. Secondly there were some people I trusted with my knowledge at varying levels of abstraction, there were others who had proved untrustworthy. If I codified by knowledge and they used it I knew that I would not be credited if it worked and blamed if it didn’t. So I would share material in private group, knowing that people would come and talk with me before using something and would be prepared to undergo an apprenticeship. Third, there were many things that I knew, but only when I needed to know them. Context triggered application, and more critical radical repurposing. In a specific context, especially under pressure I knew things then then I would not have been aware of in some prior act of codification.

As for much of Cynefin, as I delved into cognitive science I discovered reasons for these issues, anthropology taught be more as did my original degree in Philosophy. I started to use natural science (I also studied Physics at University) to inform social practice rather than relaying on observation and interpretation of practice. That allowed me to limit issues of confirmation bias and in attentional blindness as illustrated by the following quote:

“24 radiologists were asked to perform a familiar lung nodule detection task.
A picture of a gorilla, 48 times larger than the average nodule, was inserted in the last case.
83% of radiologists did not see the gorilla.
Eye-tracking showed that the majority of the those who missed the gorilla looked directly at it”
–Drew, Vo & Wolfe   Psychol Sci. Sep 2013; 24(9): 1848–1853

With that scientific enquiry I got to know Max Boisot who introduced me to complexity theory, and many other things before his tragic death a few years ago. Complexity is sometimes known as the science of uncertainty, of systems where there is no repeating relationship between cause and effect. Complex adaptive systems comprise many, changing agents with so many interactions that at best you can make statements about a systems dispositional state, about its inclinations but you can’t define outcome and there is no repeatability. What worked last time may not work this time; small inputs produce magnified changes overall and the system has properties that are not the sum of its parts. I’ve also called complexity the science of common sense and illustrated its nature by talking abouthow you would manage a childrens’ party. Complexity provided then, and still provides a scientific explanation for things that anyone with any real experience already knows. That for me was a critical insight and was the trigger mechanism by which Cynefin evolved from a basic two by two matrix looking at culture and codification to its current five domain form.

The net result of that was a preliminary paper at an academic conference, followed by Complex Acts of Knowing which is now one of the ten most cited papers over the last decade in the field of Knowledge Management. As I removed the labels and focused on the nature of the five domains the applications widened and it started to be used for strategy within IBM and its clients. By now I was working in the Institute for Knowledge Management within IBM and recruited Cynthia Kurtz to work for me. We took the framework and revised it as a generic approach to strategy in The New Dynamics of Strategy published in the IBM Systems Journal. That in turn resulted in an invite from Tom Steward, then Editor of the Harvard Business Review, incited me to write an article on the application to Leadership with a mutual friend, Mary Boone as co-author. It took a few years, but in 2007 it was published as the cover article in HBR and subsequently won an Academy of Management award as the best practitioner paper of 2007. Subsequently I have applied in to medical applications with Prof. Annabelle Mark and to counter terrorism with Mark Lazaroff. It has been used by countless authors as a sense-making framework on a range of subjects from understanding the role of religion in the Bush Whitehouse (a paper by a member of the Cabinet Office in the British Government) to peace and reconciliation processes in Latin America.

At the heart of Cynefin is an argument against universal approaches, in favour of using a contextually appropriate solution. It frankly amazes me that this is considered novel or revolutionary in nature. There is a British phrase that is appropriate here: horses for courses. Before placing a bet you check out the track record of horse on different ground. Some do better on heavy, some on dry and so on. Different things work or don’ t work in different contexts. Over the years I have been increasingly frustrated by advocates of valuable new things who feel that their enthusiasm should be shared by everyone else, be universal in application and involve the ritual burning of all that has happened in the past; a bonfire of vanities. Over the decades Iâ€™ve seen it with successive management fads, some of which have high utility some little, but all appropriate in context. Business Process Re-engineering provided value, but it claimed universality and failed, Six Sigma was a lets do it harder and see if it works this time attempt to overcome that which of course made things worse. We had the Learning Organisation, Blue and Red Oceans, Balanced Score Cards and now Agile. All devoid of underlying theory other than in retrospect, mostly providing value, but only within context despite the claim of Universal application. Each fad then attracts its own followers, masters of retrospective coherence who ride the waves of fashion.

Cynefin is about saying that, in the main, most things had value within context and started to fail when they moved outside of that context. Often advocates simply failed to understand that and were more concerned to condemn heretics that to create something of lasting value. They avoided the very simply truth that condemning what went before does not of itself legitimise what you propose as an alternative. This approach also allows for change and movement between applications as a field emerges and the entry of new ways of thinking under conditions of uncertainty.

Pressing demands on my time have meant I had to delay this final post of ...

I reached a significant milestone today. Four years ago the 28th of February and the ...