A metaphor for coherence 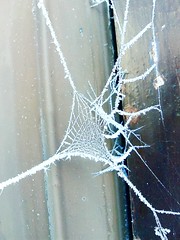 I frequently reference messy coherence as a key aspect of living with complexity and I’ve blogged about it from time to time, especially in the context of the state of my study. Of recent years I have also used the example of a spider’s web, not in the fearsome symmetry of its first creation, but if it has been around the block a bit; caught a few flies, being rained on or in the case of this one frozen. Thanks to Anna Biskit’s Flickr stream for the picture by the way.

The point is that you can the structure which was there, depending on the degree of disintegration it may or may not still fulfil its original purpose Its sticky, you can be woven into its pattern or you can fly through the gaps. It has beauty even as it disintegrates, it cannot be rebuilt but has to be replaced with something that will in its turn fade.

The metaphor carries with it the concepts of transience, but is also of purpose and for a time solidity. Depending on the context they can last for days, months or even years before they have to be rebuilt. Its not the best metaphor for an organisation, but it is a good metaphor for thinking about degrees of coherence.

A number of threads on the Cognitive Edge blog highlight the frustration and difficulty in ...

Books do furnish a room

The title of this post is drawn from the tenth novel, and the first of ...