Edinburgh may be called the Athens of the North and is the home of the Scottish Enlightenment (a singularly inappropriate name if you have to read Hume I always think) but conditions this weekend were spartan with a wickedly cold wind that by today had combined with heavy snow.  I had come up for a meeting with the University of Edinburgh today to start what looks to a positive path to an interesting partnership.  Of course there was the little matter of a Rugby match on the Saturday but that was the subject of an earlier post.  Yesterday to a lesser extent today I had a chance to walk around the city.

For those of you who like the travelogues with personal memories, then this is one of them.  If you don't stop reading now!   I first came up to Edinburgh in June 1966 at the age of 12.  I know the date because I sneaked into the Museum to see John Glen speak – his Freedom 7 capsule was on show at the time.  I say sneaked not to indicate that I stole into the building, but that I stole away from material control for the event.  Early hints that I was interested had met with some side comments on American militarism so I realised there might be a problem. 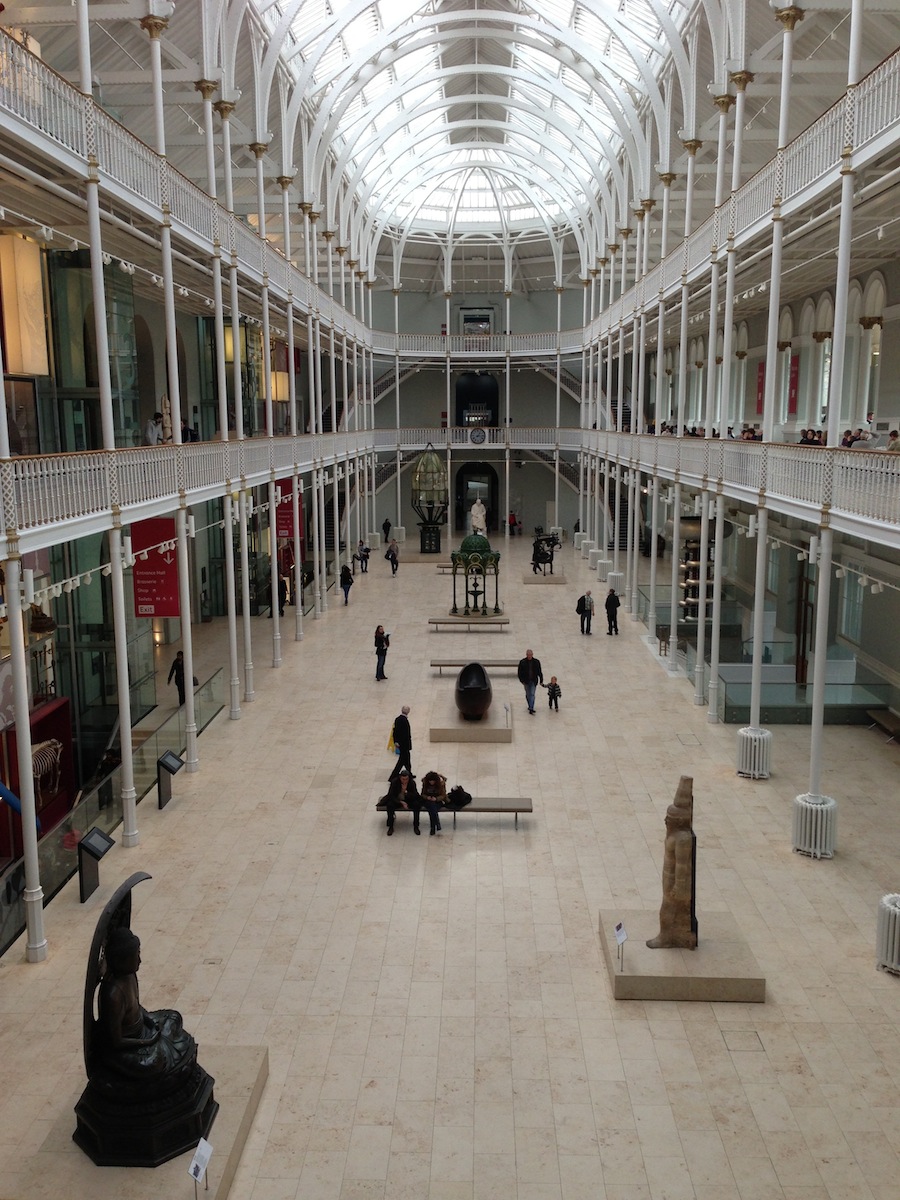 Fortunately I had struck up a relationship with a curator in the fossil section so I had an excuse to go back and I was able stand roughly in the same position as this photograph was taken and listen to the man.  The fossil sections of museums were are a part of my life in those days and most museum staff were interested in any child who didn't just want to talk about dinosaurs.

We were up in Edinburgh on a brief holiday.  My father, then a vet with the Ministry was on paid leave to do a post-graduate degree and we were up to spend a week with him.  My mother didn't drive back then and he was working so everything was done by bus and shanks pony to the museum, the castle, the zoo and the Royal Mile.  One of my abiding memories is a tourist shop near the castle that was selling a plastic bad of genuine scottish soil containing the seed of one scots pine tree for the compelling price of five guineas: £1.05 for those not old enough, or not in the racing fraternity.  The best part of 50 years later and the tack remains!

My next visit was from University on a Chaplaincy trip where I was also the designated driver of the Union minibus.   I remembered my father's favourite route up via Moffat so regardless of the protests of the Methodist Chaplain who was navigating I took that route.  I don't think he had been drive on mountain roads before and I was not his favourite person.  We used to call him St Don the Ecumenist because he really didn't like people being in different denominations.   He opposed my being elected Chairman of the Chaplaincy Group on the grounds that I was not ecumenical enough and never forgave me for arguing that he was a doctrinaire methodist on the basis that methodism was the lowest common denominator of the various christian sects and he was therefore being sectarian in his ecumenical fervour.  We also decided to sing Faith of our Fathers to comfort him on the mountain road, but it had the opposite effect.  That was a good trip though.  We slept on the floor of Methodist Central Hall, we went out drinking (well the Catholics did) had long pretentious debates and generally enjoyed ourselves.

Post University when I was working for the SCM I was a regular visitor we had a student house and an office there.  I got my first ever parking ticket one morning; odd the things you remember.  One of the flats we owned was under that of Robin Cook, one of the last principled (in politics if not in marriage) Labour Party politicians.  Between Robin and Elizabeth, a Calvinist Theologian from the University discussions on those visits went on late into the night.  Not quite up to the level of Dundee, a side trip one year, where we had to be bailed out of a police cell in the morning by the local Bishop (who himself had been luck to have left us a few minutes earlier) but that is a story for another day.

Of more recent years I have generally come up every two years for the International and its always one of the best trips.  Partly because in the main we win, but the atmosphere is good and some of the most exciting matches remain those between the two Celtic cousins.   One memorable year I brought Huw and a friend then around thirteen.  The traffic was so bad we ended up having to walk from the ground to the airport, around six miles in bad weather on busy roads and with a deadline for the last plane back.   Since then I have generally booked the night after the match to avoid that problem.

I've always loved the architecture of Edinburgh and the side streets (see the opening picture) are a part of the delight.  I've walked all over the area around the Royal Mile and the New Town over the years and I've always enjoyed it.  On this trip I went down the full length of the Royal Mile to see the new Scottish Parliament and was disappointed to say the least.  to be honest it looks like a thrown together concrete shack where the builders have forgotten to clear away the metal rods that are now rusting badly.  Given the location by Hollyrood its a travesty.  I'm told its better on the outside!

Dinner was at the Whiski Bar and Restaurant with daughter and friend.  I've been there many a time and I strongly recommend it.  On this occasion there was a large Welsh contingent in, watching the England-Italy match and supporting the visitors who did the ant-English cause no end of good meaning that we only have to win by seven points next week.  I had thought we would go into that match to spoil a Grand Slam but not prevent loosing the Championship Crown, but now there is all to play for.  I walked back past the statue of John Smith and said a prayer for the neo-cons who idolise him without reading his work on ethics.

Today saw thick snow, or possibly hail it couldn't make up its mind.  Daughter had to abandon her various chemicals in order to make her plane.  I had to try and monitor flight departure times for her while walking into the icy wind and snow to get to my first meeting.   So  I nearly froze to death but had interesting three interesting meetings and lots of coffee.  Text messages indicated that my daughter had made the plane but then ended up stranded in Gatwick thanks to someone on the line but I think she finally made her lecture.

Meetings over I sneaked (in the sense of dashing in and out this time) into the museum to get the picture of the Gallery but then headed back to the Grassmarket Hotel pictured to the left and you can see how centrally it is located.  I strongly recommend but don't believe them about the wifi and get ready to climb stairs!  Great staff and its quirky but comfortable.   I collected my bags and then struggled through the slush to the airport bus.  A good weekend for conversation, rugby and business, just that depressing collection or rusting iron rods on concrete the spoil things!

Control is key in managing a CAS

I really apologise for the opening picture, but it was too good not to use. ...

Well you didn't expect me not to mention it did you?  After a whole month ...