The last day of the meterological summer and my original plan was to spend the weekend completing the last two stages of the Wye Valley Walk.  Two things conspired against me however.  Firstly the lower right leg injury I picked up a week ago continues to be problematic despite regular ice packs.  Secondly daughter planned to come home for a wedding of one of her friends and was hinting at a lift.  Now as your children get older (25 approaches in this case) you seize every chance you have to spend time with them.  So I volunteered to pick her up at the end of the day from Brighton giving me the 2.5 hour drive back to talk with her.

It seemed to work out well with the injury as well.   When doing the South Downs Way I had passed through Amberley Station and the walk along the River Arun either side of that looked interesting.  So having finally had six Trampoline Coach trainees clear through the shower one by one (Son is going for level II and our house is convenient situated so we have a collection of well behaved if slightly nerdy 'bouncers' as house guests) I set off and parked at Pulborough Station early in the morning.  I had found a web based guide which said it was 15 kilometres (just over 9 miles) to the coast at Littlehampton so this seemed ideal.  If the leg played up I could cut the journey short at Amberley, Arundel or Ford from whence there are frequent trains back to the starting point.  This proved to be an example of not trusting the web.  The GPS measured distance from Pulborough to Arundel is just over twelve miles so it must be over fiveteen at least for the overall walk.  My Arundel exit was thus two trains late and I was the best part of an hour late picking Eleanor up.  It all worked out as it happened, she changed into wedding clothes at a public toilet in Petersfield and I made The Lamb in Marlborough with five minutes to spare before her friends left.

The walk itself was a delight, alternating river, marsh (see opening photograph which also has the South Downs in background) and woodland with a few Sussex Villages whose flint based construction always reminded me of Cold Comfort Farm, probably the great comic novel & parody published in the 1930s.  The walk should be done in winter (and I plan to as the low light would be wonderful assuming the path is not flooded) to get the full effect.  But for those who do not know the book, here is one of my favourite passages.

Dawn crept over the Downs like a sinister white animal, followed by the snarling cries of a wind eating its way between the black boughs of the thorns. The wind was the furious voice of this sluggish animal light that was baring the dormers and mullions and scullions of Cold Comfort Farm. The farm was crouched on a bleak hill-side, whence its fields, fanged with flints, dropped steeply to the village of Howling a mile away . . .

This is of course a parody and the author delightfully stars passages of particular merit to drive home the point.  This is one of those. 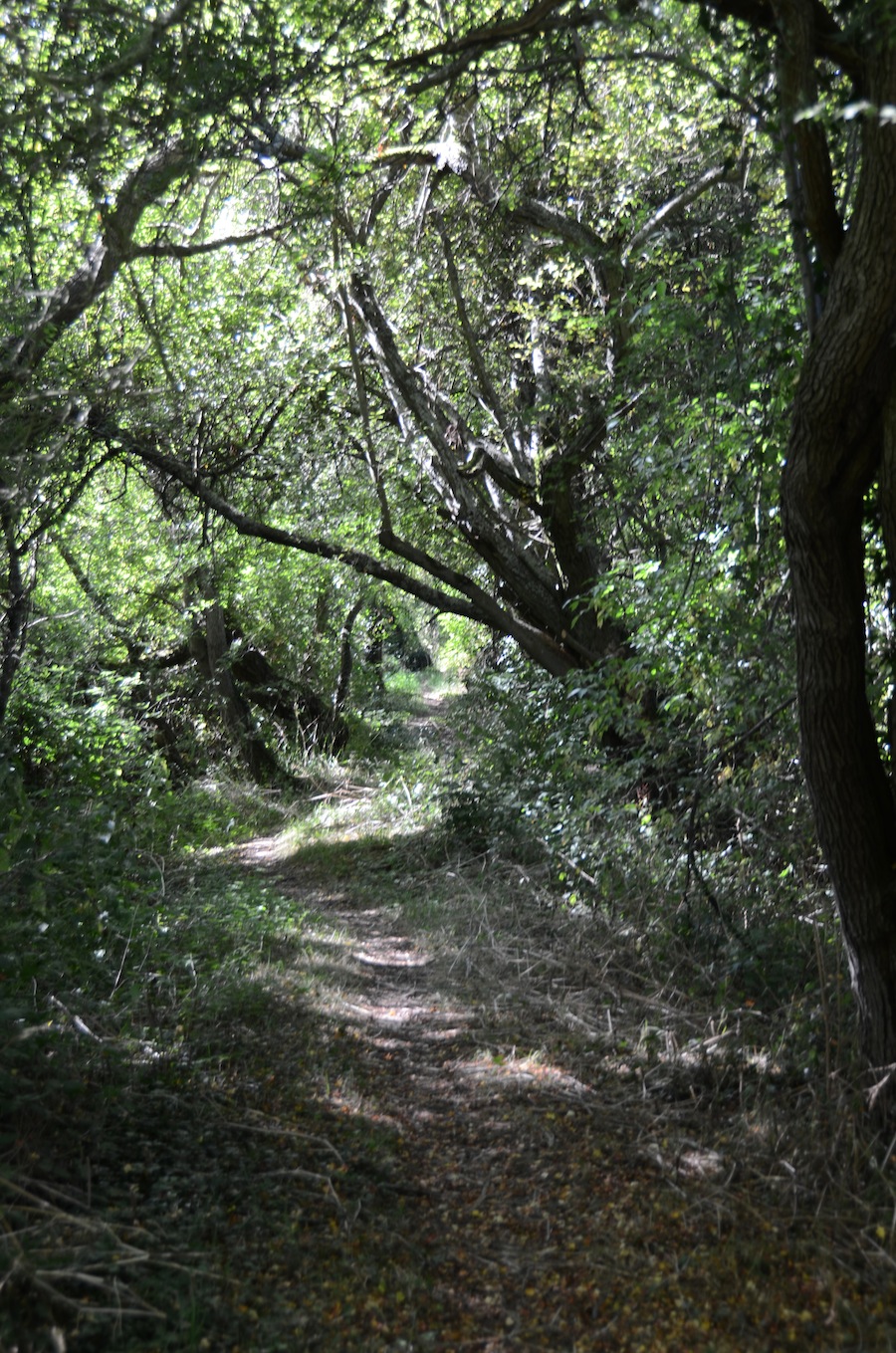 I was travelling light, the emergence of a waist line after a decade withou,t means that I can wear the waist pack I bought in Denver the best part of 30 years ago and given the flatness of the route and the early exit options I didn't need trekking poles so I took the Nikon rather than the smaller Sony.  I've going to post on the difference between them at some stage next month.  The Nikon does however manage variation in light and shade much better.  This woodland picture is an example although I really needed a tripod (ideas for light weight ones appreciated) to really get the depth of field right. Mind you I think if I take the Nikon I am always going to take the Sony as well if only for its panorama feature.

The walk quickly leaves the industrial estate behind it and climbs a gentle slope past a WWII bunker to another martial relic namely a Motte and Bailey Castle now covered by woodland.  From there we pass down to the old Stopham Bridge, now a monument and pass (yes pass it was too early) the White Hart Pub before passing through water meadows to the even more beautiful Greatham Bridge, pictured to the right. 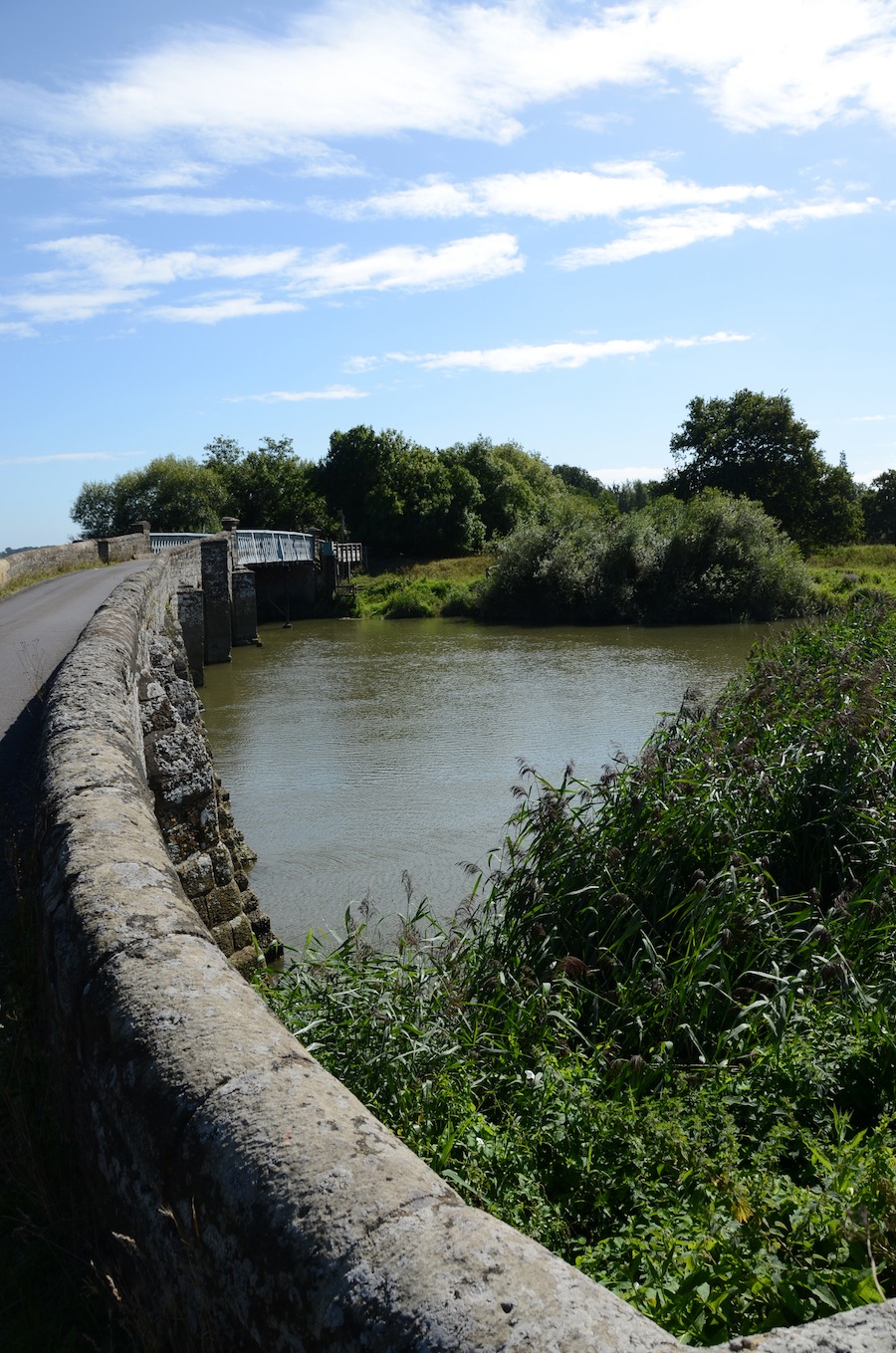 . After that the passage through Amberley Wild Brooks saw a profusion of dragonflies, butterflies, various insects and birds before finally reaching the picture post card village of Amberley which used to have a great pub which is now closed.  The village is strewn with restore our pub posters so I imagine this is some dispute with the Brewers.  But a Sussex village (or any English village for that matter) is not a village without its pub so I wish them well.

Up until this point I had been following the Wey South path but that takes a shortened route to Amberley station much of which I had done before so I headed west, visited the 12th Century Church and then joined the river again opposite Bury and then headed south paralleling the West Sussex Literary Trail on the other bank.  I also had lunch and took stock as by now it was obvious that the distance was greater than expected.  I also took some ibuprofen for the leg.  Based on the latter I decided that I didn't need to take the Amberley exit option which was a good decision for the overall enjoyment of the walk, but less so for getting to Brighton on time for daughter.  In that respect it was a bad judgement call!

The walk continues along the river bank aside from a few climbs before joining the boundary wall of the Arundel estate.  By the time I reached the Black Rabbit (one of the most scenic of riverside pubs I realised that my hopes of a half pint at least would have to be sacrificed to the clock so I carried on at speed through the wetland centre, then pass the castle and onto the station.  By this time the exchange of texts as to when and more importantly when I would do a pickup was distracting me from the pain and the limp of a leg that had been take a few miles further than was sensible. 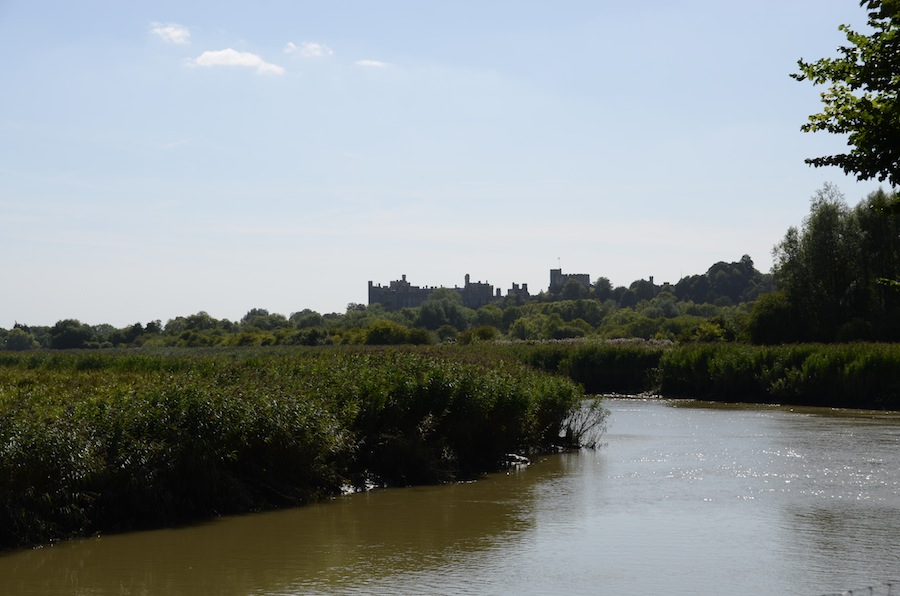 The sight of the castle emerging in a slight haze above the river was an encouragement that the end was in sight, but I should have stopped to top up the ibuprofen!

I've decided to create a new category for walks as this blog is my journal of record.  I'm also trying to remember to include the links to backup material for those who might want to use the route or at least following it on a map. I use View Ranger which does a lot of this for me.  Unfortunately if you change a track to a route it looses the links to Flickr.  I you need to edit the track (spikes that the auto-remove feature can't handle) then you have to create a route.  They promise they are doing something about this but for that moment I have found a workaround, namely to load the track again so if you want to see the map with links to the photographs where they were taken use this link.  If you just want the photographs they can be found here.

The advanced seminar we held in Seattle earlier this month was very useful in developing ...

My last version of the chaotic domain model also went through significant change at the ...