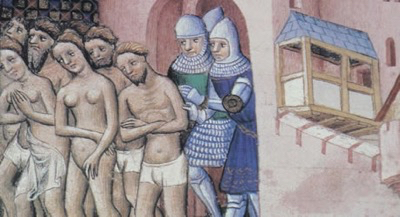 Catharism was a medieval heresy who believed there were two Gods, one evil and one good. All matter was evil and they only had one sacrament, the Consolation which sought to remove all sin on a once and for all basis. Any one who (like me) loves the Languedoc will have seen their castles which form a part of landscape, and also seem the marks left on the landscape of the Albigensian Crusade which represents one of the more savage examples of eradication in history. Caedite eos. Novel denim Dominus qui sent emus or Kill them. For the Lord knows those that are His own initiated the massacre of Beziers and the ruthless burnings that followed the suppression were extreme even by the standards of the time. The Cathars were an odd bunch, photo-feminist in allowing women to be educational and assume the role of perfect, but also saying that women had to be reborn as me in order to be saved.

So why am I talking about a heresy that had been largely wiped out by the 13th Century? Well I have just spent a week in the US, half in New York and half in Arlington, Texas. While I have been there I have been listening to debates between the presidential candidates, talking with American friends and overhearing bigots in coffee shops. I’ve also been slightly nervous about the idea of open carry being permitted in Texas Universities, but that is for another day.

What disturbs me is that all political debates in the Presidential primaries seem to be informed by the profound dualism that characterised Catharism. It is not enough to advocate a position to gain votes or change the world for the better (the two may or may not be mutually exclusive) what is also needed is to cast your opponent into the outermost darkness as the spawn of Satan. Facebook friends seem obsessed with deification of their favourite candidate and demonisation of the other. Most of my friends are Democrats so it is now an either/or choice, but it is also true of the Republican candidates. As an aside you wonder what Lincoln would think of his party considering a choice between a demagogue and a religious fanatic? The demonisation involves partial selection of half truths and their amplification through social media. Little critical thinking, or even respect of genuine differences seems present.

None of this is a valid approach to finding a way forward in the difficult economic times faced with the catastrophes of global warming and mass migration. Impossible promises, unreasonable attacks, demonisation; where in all of this can we find a modern Statesman? My reference to the Cathar’s contradictory attitudes to women are also relevant.

PS: To add, a day later, from the Guardian, an excellent article summarised by this quote “In the arsenal of the phone, the politics of God is one of the deadliest punches to the sweet spot of the American mind”

I don’t know if the author of this post advocating that AQ (Authenticity Quotient) to ...

A little bit of trivia today, but an interesting illustration of culture and comfort (in ...