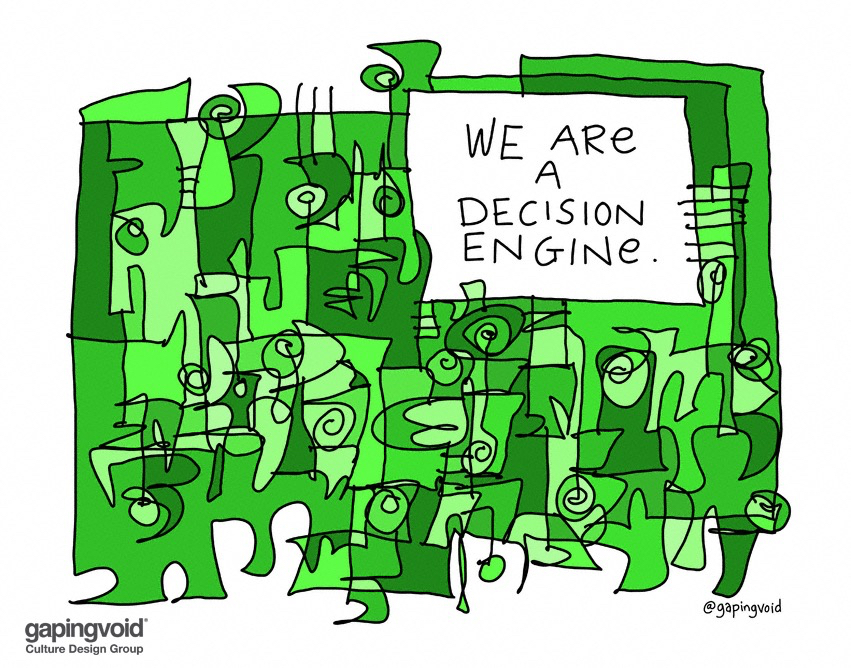 One of the most common, and the most irritating aspect of change workshops is the number of times they end up with broad statements about how people need to change their culture, change their attitude etc. Everyone makes decisions about how other people should make decisions; it gives the comfort of being seen to do something while palming off the responsibility on others. This happens top down but also bottom up. We can’t do anything untill …. is too often a refrain that allows people to ossify. In someways the Gaping Void cartoon is inaccurate; we are decision avoiders, decision delegators more than a decision machine. This is particularity true in the modern organisation where avoidance of blame appears to be more desirable an attitude than taking responsibility together with the associated risk.

Now all of this has long been the case, but complexity gives us new insight and new ways of working with this. If we go back to the issue or proximity, the need the interact at a local level then we can apply the theory to practice. Decisions should be made in relation to current activities at the level of competence of the decision making agent (it may not be an individual). The more that decision is concrete, something that will be done, and the less it is abstract, idealistic in nature the better. Hence the generic approach we have developed in cognitive edge of presenting clusters of narrative that describe both the present and the adjacent possible state to a decision maker who then asks the question What can I do today to create more like these, fewer likes those. The decision is about a concrete action in the here and now, linked to context. Its not an abstract statement about how things should be.

So if we present material at a board level, the question relates to the competence of board. That may be a change in regulation, in authority. It is something they can do now which will make a difference. A customer facing staff member asks exactly the same question, but within the context of their work and a generic sense of direction. Based on the same source data, assembled at the right level of competence, all agents make small action based decisions in the present. I’ve called this fractal decision making.

So from complexity theory I am using the issue of proximity, but I am also recognising the ability of humans to organise in such a manner that decisions can be made in a wider sense of the system including belief and other values based contexts. All of this links to tomorrow’s post about dispositionality and dispositional change so expect some more clarity then. The overall point I want to make is that humans do not just respond to stimulus, they can make conscious and deliberative actions based on abstract principles and that that alone marks out human systems as different.

One response to “Acting at your own level of competence”

I’ve spent a fair amount of my time in the mountains working within a general ...

One of the most important things to grasp about a complex adaptive system is that, ...