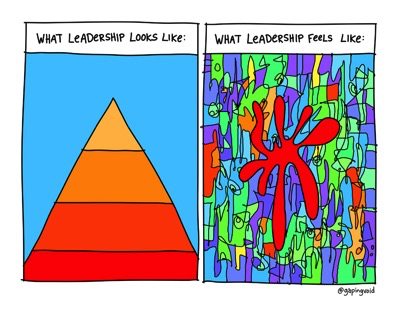 The daily email from Gaping Void is saving me the effort of searching the internet for images before posting. The cartoon speaks for itself and has wider application than leadership, it can be used to look at the wider issue of change and the problems that have been created by the dominance of an engineering, cybernetics induced over the last few decades. Hierarchical assumptions of progression underpin so many models, from the pseudo-scientific and elitism assumptions of the nonsense that spiral dynamics has become to the more enligned but still linear models like Theory U. They all imply, whatever their denials a heightened statement of enlightenment for those who lead the process. When people start to advocate a certain type of behaviour, a set of attitudes, a required competence that should be possessed by those over who they have formal or influential power then we have a problem. In part that is the question of privilege, in part a failure to really on board the implications of complexity (and I speak here as some who has sinned and may well still be in a state of sin in this regard).

In today’s post I want to start the examination of who/what should and who/what can have agency in creating change in the complex fractal systems which comprise our various organisations, polities and increasing poleis that comprise our world. I can only start that process, but complexity theory, in particular the field I am focused on establishing namely anthro-complexity gives us exciting new ways to reimagine the way we live. The problem which I started to address yesterday is that a new way of thinking cannot be achieved by using the metaphysical assumptions of the present. To talk about individual change as predicating a wider change means that we are all doomed, however well intentioned the theorist or practitioner. It is all part and parcel of the issues that have arisen from the dominance of social atomism and its consequences for health, both individual and collective, that was well summarised in my link yesterday to a well written peace on the end of the American Dream. We live in a society which makes a cult of the individual, and sees agency as an issue of individual choice occasionally mitigated by a context which the truly noble or motivated will overcome.

Firstly to the morality of privilege. To be clear I am not taking a position that anything goes or that individuals and organisations are not entitled to have a sense of how things should me. But I have a problem with assumption of this is how it should be. Such assumptions may originate in the problematic relationship between HR and the CEO. We see it in change programmes, in 360º surveys, recruitment screening and many other areas. Those in charge of the organisation have to manage multiple complexities and it is all to easy for them to respond favourably to those who offer deterministic and simplistic solutions. A whole industry has arisen in which ’scientific’ approaches are offered with the promise of known outcomes. Selective cases, hypothesis based questionnaires to create the ’scientific’ data, reliance on self-reported outcomes; the issues are legion. The reality, as the cartoon so well expresses, is that all of this is basically messy.

At the level of society the problems grow with an elite using the language of ‘known outputs’ to allocate resources. Explicit measurement systems often consume resources that would be spent on the things they purport to measure. Increasing disillusionment means that we get the anti-establishment reactions that have traumatised this year on three continents, but of which the early signs have been visible for some time. Much as I regret saying this, too many of those who advocate individual change fall into the same trap. There is a massive difference between influencing or nudging people and telling them what they should be. We need to create change which is rooted in the current realities of people’s lives not some future and culturally/class driven ideal.

Secondly to the matter of complexity and a fundamental constraint on what is possible in a system without linear causality. When I was thinking about this post yesterday I remembered a key phrase from the children’s party story namely that in a complex system we need to: manage the emergence of beneficial coherence within attractors, within boundaries. I’m not going to spell out the basic lessons of that teaching story but I want to look at the implications. All that we can manage in a complex system are the boundary conditions, the catalytic probes that trigger the emergence of attractors and the the allocation, ore reallocation of resources to respond to what happens. This is an ontological matter, and it overrides any ideological views about how things should be, by the nature of how things are. I’ve previously posted on the nature of change (reference is to one of a series of posts), but in this series I want to focus on agency so that I will pick up tomorrow.

I’ve had a frustrating few weeks since my last post. An as yet uncorrected error ...

I’m out to Milan tomorrow and I am starting to feel like a Typhoid Mary ...