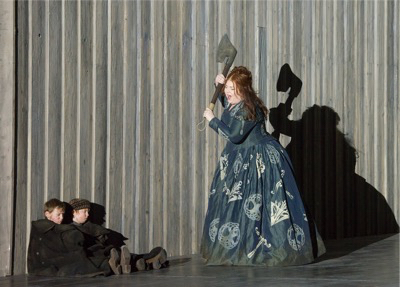 To the ENO last night for a production of Norma by way of a client meeting just south of Cambridge. I’ve grown more fond of Bel Canto opera over the years. Curiously Mary Gentle’s wonderful fantasy The Black Opera gave me a new perspective on the period. For those unfamiliar the term was coined by Rossini in the 19th Century and now refer collectively to his work, that of the early Verdi along with Donizetti and Bellini. If you haven’t read the book do, if you haven’t read anything by Mary Gentle then buy everything, starting with Grunts (Lord of the Rings from the perspective of an abandoned troop of Orcs). I should be clear at this point that I tend to the view that Opera doesn’t really start until Verdi matures and Wagner manifests something truly other. Earlier operas I collect but tend not to go out of my way to revisit.

Having just made it on time I picked up a programme to see the dreaded white slip announcing a cast change. Marjorie Owens, due to sing the lead part, was ill and her replacement Katrina Shepherd had only really shadowed major roles in her past. Now I normally take this sort of thing as it comes, you often get to see a new star in the making. But Bel Canto, as the name implies, really stands or falls by the quality of its dramatic sopranos. And within that field Norma stands alone as one of the most difficult parts in the whole cannon. The opening area to the Moon goes from the highest to the lowest notes without pause or space for hesitation. It was a seminal opera for Wagner which is reason enough to go, but with a good soprano the singing itself is sublime even if the ‘wholeness’ lacks a ‘modern’ treatment.

To a degree the expectations were low and the risk to Ms Shepherd low. Competence would be expected but not a commanding role. I was unhappy as I have a great fondness of Owen’s voice and that was compounded by my neighbour stinking of stale tobacco smoke. At the end I stayed on, rather than dashing for a train that would have got me home before midnight, choosing a ninety minute delay to applaud what was a magnificent effort in which she effortless took control of the stage and created the balanced interaction with Jennifer Holloway as Adalgisa that is the beauty of this opera. Forget the tenor roles, the only real male part (to my mind) is for Orveso as head of the druids. That performance deserved praise and it would have been churlish not to give it.

All of that said, the production itself has dire staging and slightly too slow a tempo in the overture. The latter is a pain, the former almost comical. This is opera about celtic mystery, love and sacrifice cited in conflict between the Gauls and the Romans. In this production it was transposed to a scene from Dickensian. The Romans were Victorian gentleman which Norma’s children appeared to be auditioning for the role of Oliver in the workhouse. A tree trunk was constantly manoeuvred around the stage to no apparent purpose and there was far too much cleaning and blooding of oversized axes, symbolism should not be shoved in your face. The opening picture has Norma just stopping short of executing her children to punish her unfaithful lover (this is opera after all).

To be clear I have no objection to reinterpreting opera. I loved the ROH performance of Parsifal situated in the Blitz and almost game to blows with an elderly couple who were huffing and puffing about modernisation during the performance. I thought the Seattle opera performance of the Ring was dire, a return to the 1950s with horns and spears, while the Richard Jones production at the ROH, castigated by traditionalists, at times inspiring, always interesting. For those not familiar it situated it in a Soviet psychiatric hospital with Brunhilde walking deranged in a hospital gown over operating tables strewn with body parts hurled from a charnel pot by the Valkyries. OK the giant fly in her rock was probably a step too far, but it made you think. The ENO shifting Rigolletto to Mafia run New York was inspired as was their Carmen situated in more recent guerrilla warfare. So I am far from a luddite in respect of productions. But as I said, they have to make you think differently about the opera, to see it through other eyes. This production had nothing in that respect, it was drab, pointless and distracted from the performance as a whole.

But the night belonged to Katrina Sheppeard and it was worth having to take the 2330 from Paddington, populated by an interesting mix of drunks and theatre goers. Next up Akhenaten, between lists to Bergen and Austin in a few weeks time.

A few things came together this morning which sent me scurrying to find a half ...

For those not familiar with our distant ancestors, this is a therapsid or one of ...