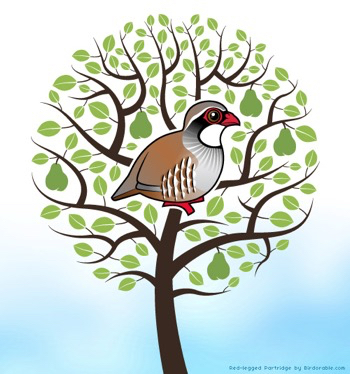 One of the issues I’ve found with the Twelve Days of Christmas nursery rhyme is that is no precise agreement on their symbolism. The idea that it is a catechism song from the period of Roman Catholic persecution in Britain (1558-1829 for those who don’t know) would have mean neat as a teaching rhyme designed to help remember fundamental truths would have served my purpose well! But the idea turns out to be a 20th Century invention by Canadian hymnologist. That said there are other theories which say it was used by pagans to preserve their faith in the face of persecution by 8th Century Christianity and in those theories all the verses are birds. What is interesting there is that the meaning is defined by what we know 8th Century Christians condemned rather than what Celtic pagans believed, understanding things through the veils of the dominant ideology of the time is a part of historiography but (i) its not satisfactory and (ii) it is still one of the few methods to understand modern organisation.

To get to the point, I may use the concept of a catechism song in these posts, although not in the sense of our Canadian Hymnologist. The goal is to look at positive and negative aspects of organisational development so dealing with a method for teaching religion is less ironic than you would think. I won’t just use symbols because the image itself can be an inspiration. At the current time I am thinking that Lords a Leaping will be Excom and Ladies Dancing the HR/OD department; the one area of the modern organisation where the glass ceiling is most challenged is HR/OD but all too frequently the resultant behaviour provides a strong counter argument to the idea that more women in senior leadership positions would produce a radical change in attitudes. The situation seems to determine the (wo)man rather than the other way round.

“As the partridge sitteth on eggs, and hatcheth them not; so he that getteth riches, and not by right, shall leave them in the midst, his days, and at his end shall be a fool.” [Jeremiah 17:11]

So let’s get to the first post in the series and I will start as I mean to go on by making some observations on the symbolism of the image followed by some conclusions. The partridge is used a symbol of fidelity, in the winter months they leave their flocks and form monogamous pairs. The mother partridge also has a reputation for faking an injury to draw predators away from her helpless nestlings, so a willingness to sacrifice for something weaker. On the other hand they have a reputation for stealing other eggs and trying to hatch them. The pear tree is a symbol of male sexuality (apple female) in some traditions, a general symbol of fecundity in others. It is a long lived tree as well which carries its own meaning and is often linked to immortality.

I spent the first few years of my industrial career in HR and Training and it was enlightening to say the least, although I moved out as soon as the opportunity presented itself (that is what enlightenment generally does for you). I somewhat naively believed that my role was to look after the well being of the employees, a notion I was soon disabused of when I naively (I was in my mid twenties at the time) decided to lecture a new Financial Director about his somewhat cavalier treatment of long serving staff members. This of course was in the days when Organisational Design or Organisational Development as they are currently understood were a part of business management supported by HR rather than functions in their own right. It was also before the fad for massive company wide change initiatives had started so it might now be considered an arcadian period!

However I still think I was right. There needs to be something within the organisation that protects employees from rapacious predators. During my IBM days I noticed a phenomena I called target hopping. Here someone would move into a new management position, rape and pillage for a year or so then move on having over performed on targets. That over performance was at the cost of long term sustainability and often the physical and mental health of the employees. My former business unit in Data Sciences (MURCO a software product) was subject to that phenomina after I left for a strategy role. To achieve a target the newly responsible Director offered clients three year deals at ridiculous discounts to hit a short term order target. Those discounts offered future professional services that made the business unsustainable and I was brought back in a few years later to sell off the rump to one of its former distributors. Ok a moderately competent salesman I had looked after went from patchy achievement to being sales person of the year and his new boss celebrated target achievement. Bit a year later …..

To take another case. I remember a Andrew (surname withheld) in IBM who would tyrannise his direct reports in a series of telephone calls every Monday to drive up orders regardless of consequence on context. It is the first time I saw experienced staff break down, or on in one case literally shit himself. It was appalling, but every year he moved onwards and upwards as there was nothing to inhibit such behaviour. In effect the said Andrew was stealing from the past and the future as a means of achieving personal success at the cost of the wider organisation. Critically the system allowed him, new encouraged him to do so. In fact (coming back to the symbol of the Pear Tree) it encouraged a patriarchal and feudal attitude to assets.

In both cases riches were achieved not by right, but by short term focus on immediate targets. Neither the organisation or most of the individuals came out well in the long term although Andrew did well out of it, one of the reasons it was not difficult to leave IBM. The individuals ideally would have known better, but the system itself permitted such behaviour and as such it was badly designed. Interestingly in Datasolve (which became with a management buyout and two mergers Data Sciences) we had a rule that General Managers had to be in place for three to five years not one to two to prevent that sort of thing. We also didn’t allow people onto general management programmes without proven experience in Sales, Development and Support. So we had institutionalised practices that created the right dispositionality in the system as a whole.

So coming to the lessons for OD (I’m now using that to represent, design & development and aspects of HR):

I’ll pull those lessons together, along with those for the remaining posts at the end of this Christmas sequence.

My Just leave it alone post of yesterday argued for a less control and against ...

While the conventional interpretation relates to devoted love I want to look at this more ...