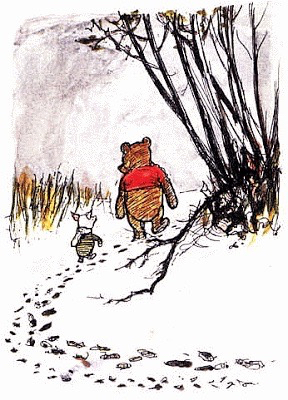 For those who were emotionally deprived in childhood by not being read the Pooh stories I suggest a quick refresh on Winnie-the-Pooh, Piglet, and a Snowy Day. While you are at it, read the rest. Winnie-the-Pooh provide a rich source of learning and reference, as do most of the classic children’s books. A phrase can reference a complex meaning, or make an unexpected association of link. One of the evolutionary uses of narrative is to provide for this richer and more effective communication. If your only knowledge of Pooh is through the Disney films, short and long alike then detoxification programmes are available and recommended before you attempt the real thing.

But back to the story, and hopefully to the point! Assuming you have read the story you will know of the accumulation of Woozles and Wizzles tracks with the potential for Hostile Intent as Pooh and Piglet walk round the spinney. Perceived danger drives Piglet away to a suddenly remembered task. Then Pooh is rescued by a whistle from Christopher Robin who has been sitting the the branches of an adjacent oak tress watching the whole thing from above. When Pooh having thought, in the most thoughtful way he could think realises that they have been following their own tracks all the time we get the following exchange:

“I see now,” said Winnie-the-Pooh.
“I have been Foolish and Deluded,” said he, “and I am a Bear of No Brain at All.”
“You’re the Best Bear in All the World,” said Christopher Robin soothingly.
“Am I?” said Pooh hopefully. And then he brightened up suddenly.
“Anyhow,” he said, “it is nearly Luncheon Time.”
So he went home for it.

The obvious relevance here is that Christopher Robin has a wider perspective so he understands the context in which the error is made. but there is also a concern that allowing the insight of delusion and foolishness to be lost in affection is unlikely to to result in continued learning and the nutritional distraction just makes that worse.

Understanding context is important before you draw any conclusions from what you, or others, think they have discovered. Understanding that you probably cannot fully understand it is even more important. The use of cases to retrospectively justify a set of conclusions is an example of context limited research. Less so now, but there was a period where most management theories were derived from the same set of major blue chip US based manufacturing companies. These days they use anything that comes along, the blue chip label less needed than before. But the context of the US is different from Europe or Asia (and even within the US); manufacturing is different from services; time matters as does recent and partially remembered past history. What else is going on? All of those questions and more are just for starters. There are so many factors to take into account that we have to be very very careful in any generalisation we want to make, even to the same industry in the same country. Another critical context limitation is the source of the data. Did you (the researcher or consultant) conduct the interviews? If so then after a few you were only really paying attention to material that supported the forming hypothesis in your own mind based on the first few. Who did you interview? Did they have a stake in the game? Chief Knowledge Officers are not a reliable source of information about knowledge programmes on which they are measured and so on.

That does not mean we cannot learn from what others do, but the nature of the learning needs to be observational in the main and accumulate into a wider narrative. I favour gathering that material from multiple perspectives and looking at patterns (including outliers) in those perspectives. More on that tomorrow as well as using natural science as an a priori constraint on what can/could have happened and as determining a direction of travel in the future. In any case based, or empirical (a much misused word) work full statements of the context both of the situation and the nature of the observation are missing from nearly all the papers I review or management books (at the station book stall end of the market) that I read. There is often a token statement in the research papers, but in the management field it is all about bold assertion and propagation of a recipe.

Dilbert summarised it back in 2013 in respect of leadership far better than I have, as he says context isn’t popular it makes it difficult to sell books and recipe like interventions or gain speaker fees. The desire of the victims to be given a simple formulaic solution just compounds the problem; they would prefer to go home to lunch than acknowledge that they have been foolish and deluded when the latest fad fails.

… which the Elephant’s Child in Kipling’s Just So Stores had in abundance. I’ve previously ...

So in this final post on the 3Cs of research in organisations I’m returning to ...