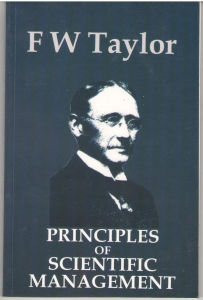 My other vivid memory of Peter Drucker (and it still hurts) was when I naively criticised Taylorism and ended up on the receiving end of an I knew Frederick Taylor response during which I was reduced to a puddle of humiliation.   The great man decided I might be redeemable, something for which I am eternally grateful and the leadership seminar I mentioned yesterday was one response.   That meant I got a chance to teach complexity theory with Drucker (and I suspect that is a unique) and to talk about the relationship to other theories.

The conclusion we came to was that scientific management and complexity had much in common.  While the former provided physical augmentation to human capability, automating many tasks it still at its heart respected the value of human judgement.  Complexity, or at least my cognitive complexity variation also shows the same respect, arguing for cognitive augmentation.  In SenseMaker® we talk about humans at the front, humans at the end which makes the same point.

Both contrast with systems thinking (in its popular forms) where the intent of many of the practices and their theory appears to be cognitive replacement.   I’m increasingly convinced that there is more work to do here and I’ve been going back to Taylor and Deming to review that intuition.  The more I read, the more I am convinced this is important.  Interesting computational complexity and systems dynamics share a love of models which just adds to my argument.

Between the ideal and real?

An interesting extended weekend in an Agile Alliance think tank I joined last year.  Then ...

Creating an architecture for change