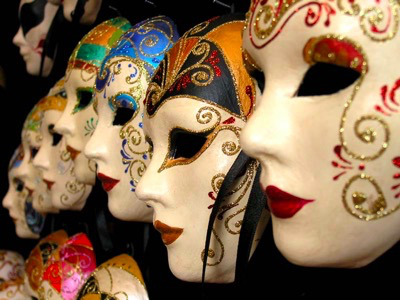 I’m in Kuwait for the next todays taking part in a Government event on the Knowledge Economy. My first time in Kuwait and the nature of the event means that I will have to wear a suit two days running. And if I wear a suit then I have to wear a tie, the Church shoes and so on. I put them on this morning, fountain pen in the top pocket, business cards in the pocket and I was ready for the event. Two days ago I was in full Paramo kit with winter boots, inner and outer gloves and a rucksack with survival gear in the Welsh Mountains. In both cases I felt comfortable and in control, swap the context and it would have been interesting. I’m not often in a suit these days so the novelty caused to be reflect a little on the way in which clothes change the way you think. In turn that reminded me of Polonius’s advice to his son Laertes in Hamlet:

Costly thy habit as thy purse can buy,
But not express’d in fancy; rich, not gaudy;
For the apparel oft proclaims the man,

There is a sense of disguise here but it is also about identity. Let’s extend that with Mark Twain writing in the voice of the Czar of Russia:

There is no power without clothes. It is the power that governs the human race. Strip its chiefs to the skin, and no State could be governed; naked officials could exercise no authority; they would look (and be) like everybody else–commonplace, inconsequential.

More direct but a similar point. Anthropologists have long studied the way in which masks are used to change or assume an identity and some modern writing argues that internet abuse is simply a modern form of that. We use masks in ritual dissent to depersonalise the presenter to allow creative (but brutal) criticism to refine a proposal or experiment without it being personal. In health and safety work associating a ritual act (and putting on new clothing is one of the best ways to do that) changes cognitive activation patterns so people perceive the world differently. That identity change can be associated with boundary crossing into unsafe space to make people safer. Two weeks ago in Snowdonia I stopped, strapped on the crampons, stowed the tracking poles and took up the ice axe. I walked differently and paid attention in a very different way.

I’m now in Kuwait where the nature of clothing itself speaks as much if not more so than the suit I donned earlier today. I’ve said a few times that it is difficult to be seen differently on promotion if you dress the same and sit in the same desk. It used to be that you moved and dressed differently, just as (to return to an earlier theme) the apprentice walked the boards on being called to be journeyman. Tonight I have to complete a book chapter and once I finish this post I will change posture, background music and stance before turning off access to the internet. The physical acts influence our virtual engagement and vice versa. We neglect it at our peril.

I’m feeling rather pleased with myself for getting back into the habit of daily blogging. ...