Are we doomed to chaos? 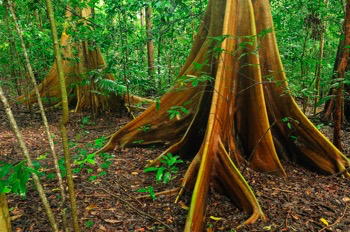 One of the cases used in Embracing Complexity (see my post of yesterday) is a reference to Holling’s work on the life cycle of a forest which is a part of the whole Panarchic body of work. Now I really need to post on that at some stage but I haven’t done all the work I wanted to do. However having been reminded of the work this week I have used it a lot in the context of a series of projects & prospects in South African.

For those not familiar with the paper it suggests that a forest goes through a series of stages. Firstly it is chaotic, plants and animals randomly associated. Then gradually the various species start to interact, to co-evolve and they start to self-organise. The next stage sees stable patterns emerge so preditor-pray balances start to form, niches stabilise the number of species and so on; it is self-regulating. Finally in maturity the forest is energy efficient, it has little diversity, more specialisation and so on. In the latter stages of self-organisation and through the self-regulating stage the system is resilience, but in maturity it reaches a stage of lock-in, at which point it can suffer catastrophic failure if the ecology shifts or some major event occurs. Then we are back to chaos and the whole cycle starts again.

Now I think that is a useful way of seeing things in terms of industry life cycles. As things get more mature, market segments get increasingly dominant, companies more bureaucratic etc. and the conditions are created where failure will be catastrophic. I think where I differ with a lot of people is that I don’t think that cycle is either necessary or desirable in most human systems. Smacks of the rapture if you think about it! Interestingly the authors of Embracing Complexity see that cycle as a sort of alternative taxonomy to simple-complicated-complex-chaotic whose creation they strangely attribute to myself and Stacy as if it was a joint creation. Well for starters we use the words in different ways, the origins of the use are different and Cynefin is a typology not a taxonomy but never mind. In practice the categories they use are a dynamic in Cynefin, what I called the Nonaka Dive in a recent keynote on complexity approaches to design thinking. Its one of the areas of Embracing Complexity where there is some evidence of skim reading rather than understanding, although to say that is not to detract from the wider value of the book.

Either way, I will review the book at the end of the week. For the moment I want to leave you with the idea of that cycle being one that can be changed. In tomorrow’s post I will show that in the context of Cynefin.

The door is not always open

I was reminded of the Daoist quote of the title while reading Embracing Complexity over ...

In my last post I asked the question Are we doomed to chaos? I planned ...