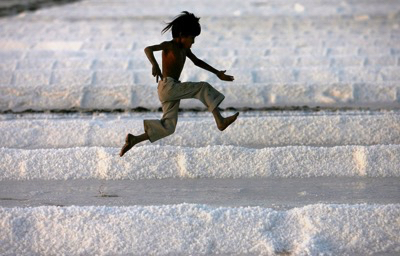 After yesterday’s post using salt marshes as a visual image of providing direction in a complex system I shouldn’t be surprised that the common place phrase back to the salt mines came to mind. As is often the case with a blog post, the subject and picture come before content; one of the reasons I like the medium so much. Starting with a title, finding a picture and then starting writing without a clear goal I find curiously liberating. I suppose it harks back to the impromptu speaking and debating tradition which was so much a part of my education up to leaving university. The 4th edition of the Dictionary of American Slang defines it as returning to hard work and unremitting discomfort after a period of relative ease and pleasure. It comes from the 1920s and the tradition of penal servitude in Siberian salt mines. So my first thoughts were that this would be a dark post, covering the worst aspects of organisational control and the perverse attempts to make us all happy employees, confirming to the top down value statements of organisational cheer leaders. That was still my thought as I searched for an image but then I found one which expressed hope and I realised that the phrase can be ironic and affectionate in nature.

I then started to think about my own career and realised that there have been very few days when I haven’t wanted to go to work, which is not to say that I have not been frustrated and bored on many an occasion. I also realised that I have been very lucky over the years seven good bosses and two bad ones, but even the bad ones were interesting and allowed me a lot of space. What I am not sure about is the degree to which this was created for me as opposed to something I created for myself. My general policy was to do what I thought was right/interesting while accepting some constraint. I think I also realised that you had to serve an apprenticeship. Working within a charity with no support staff for three years post university was probably formative as one just mucked in along with a first disastrous job following that where I and they made so many mistakes the learning was brutal in nature and ended with nine months unemployment. So the negative experience influenced me when I finally got back into a job. One of these days I’ll write those experiences up but that is for another occasion.

The one thing I do know is that I probably wouldn’t get away with that particular history in any modern organisation. I don’t remember any KPIs or clear targets until I started to run a business when I had profit and growth front and centre. Reviews were linked to human judgement rather than spread sheet determined distribution of rationed pay rises. I was lucky to have shifted from personal to finance in the early days of computing and thus had a (then) rare combination of skills. I also built my reputation during the brief 5/6 year period when 4GLs allowed application specialists to build programs and systems without a great deal of initial knowledge of computer programming and operating systems – that could be acquired as you went along. I also realised early on that loyalty within a network is key to survival, something I still hold as a principle. You have to learn to live with failure at times – both yours but more critically that of other people. Being prepared to spend six days (and most of six nights) with a hand calculator and piles of paper to reconcile BOC invoices for oxygen cylinders at multiple North Sea ports with receipts from survey ships is a painful memory to this day; but (and this is important) I sort of enjoyed it at the time. It was solving a series of intractable problems like a giant puzzle, but it also meant I didn’t have to create a chain gang of people who reported me to get the result out.

Enough rambling, I think the point I am trying to make is that is no recipe here. The circumstances that allowed me to enjoy what is now the best part of four decades of work will not repeat but the basic principles apply in any context. So what are they? Tentatively I would suggest the following:

The fifth of these is probably the most important but the most difficult to define. Understanding how gifting works (its not a one to one exchange) and being trustworthy is key. Understanding difficult cultural expectations is also vital. Working in an anglo-dutch company taught be fast that delivery expectations are very very different in those two cultures!

I’m still working on the new use of coupling and boundary constraints for Cynefin so ...

The picture comes from Monday’s VIP tour of NASA before a workshop of innovation at ...