Best way to end the year

As I indicated yesterday I had planned to spend the last day of 2013 on the hills.  If the blood test results had been bad this would have been a form of therapy, now it was a celebration.   The forecast was also good so I had planned to to a circuit from Llanthony Abbey.   I was (again) late getting off due the time it took to get the contact lens in (it isn't getting any easier) and the attractiveness of halibut and poached eggs for breakfast at the Arden Hotel.  The rain was started to clear when I parked in Llanthony which was good news as it had been torrential on the way down.  So I kitted out and set off up the track that climbs up to Offa's Dyke.  It is a steep climb and the ground was sodden and thus difficult underfoot.  The trekking poles came in useful and the views back over the valley to the Abbey ruins was a good reward for the effort.

I reached the Offa's Dyke path which is a heavily engineered path these days, but it means you can make good time.  As I walked I was reflecting on how I will pass this way again on my Round Wales Walk next year and resolved that clockwise was the best route, the Dee estuary has its own beauty but it is not a patch on the hills that the Offa's Dyke path tracks. So best to start with that in a few weeks time.  The weather was continuing to improve and as I stopped for part one of my lunch at the Trig Point the sun came out bathing the valleys with the rain filtered light that is a feature of this part of Wales.

Navigation skills were not really needed as a stone slab pointed left to the track down to Capel-y-ffin.  A good path although the water logged earth needed care at times.  Just before the lane it became impossible and I slipped covering myself with mud and spraining my arm. 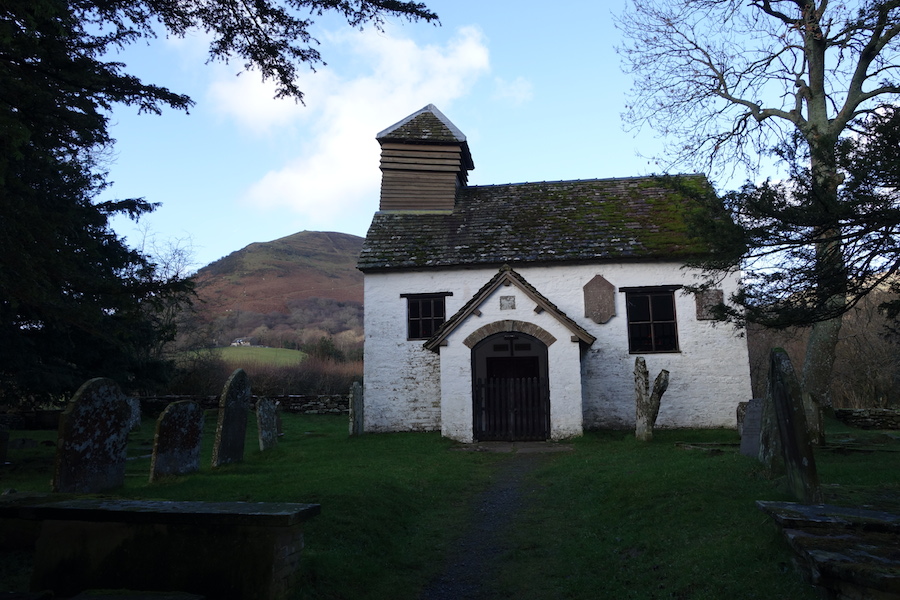 Six months ago that might have been more frequent and hurt more, for now it was a minor problem and I walked on to the chapel from which the hamlet gets its name (pictured). This is very much a walk from one chapel and abbey to another and then back and you see why the monks chose this location.

I now had some decisions to make.  The late start and the slow progress down muddy slopes meant that I would have to do my planned return in half an hour less than I had taken coming out.  It was roughly the same distance and if anything more climbing but I decided to go for it.  That meant a rapid ascent to the Blacksmith's Anvil, but the going was good and I had the rhythm with the trekking poles so I reached the top and was grateful to find a clear path.   Now the next couple of hours was a real delight (pictured at the opening).  The sun was gradually sinking to my left but the going was a clear ridge and easy underfoot so I could stride out with confidence.  To my left the shadow of sunset crept up the hill as I walked (for the opening position see the panorama below) and I will admit to getting nervous about making it before dark descending.

As I crossed Bal Mawr I knew it would be OK and I resolved to plot a further set of routes that would involve this ridge.  The descent to the valley and my car took time as dusk fell and the final half hour was done with my head torch.  But this was one of the best days walking and a valley that looks worthy of exploration.   I can see why my cousin has stayed there every Christmas for years.   From there I had a short trip to Merthyr and my hotel for the night, not to mention a well deserved meal.

Now today was a good day, in fact an excellent day.  It started with a ...

… and to start a new one

I had an aspiration this morning to take a picture like that which opens this ...