This week Tony Quinlan and I have been working on the design of a set of parallel projects for the UNDP in Bratislava.   It's been a fascinating two days, working with committed people on important projects ranging from understanding the social exclusion of Roma to the impact of protected area management (regional parks) in Montenegro as well as Governance issues in services such as health and education.   We went from four to six, possibly seven projects in short order by the end of day one.  There was a lot in common with a recent workshop we both ran in Bogota.  We were dealing with people who had lived through the radical changes in what used to be called Eastern Europe, in some cases at considerable personal risk, who were now working  for change.   They were intellectually curious, pragmatic and experienced. And their appreciation of the ideas was probably more of an ego boost than is good for me!

As we worked through seven project definitions for SenseMaker® over the two days we saw rapid assimilation of the concepts of abductive micro-narrative research coupled a realistic attitude to making the projects work.  None of the anti-intellectualism so common in the US and UK, or world weary cynicism.  Normally at the end of these parallel design workshops there is a lot left for post event resolution, but not this time.  In two days the  various capture activities were planned, demonstrating considerable ingenuity.  Signifier design was complete to a high quality in record time.

The only downside is the new work I did on process, captured on the smart boards appears to have been lost into the black hole that is a Windows Operating system.  Anyone know how to open file CaptureTemp(24464).galleryitem?

The dedication of the team was illustrated by the three delegates who, when their plane from Montenegro was cancelled due to fog, drove 14 hours through the night to make the event.  Last night when the power went out in the hotel we were staying at we had a reminder that such events while now rare were,all to common a few decades ago.  Sitting over a complimentary beer or two in candle light hearing those stories was a salutary reminder of what it is too easy to take for granted.  The hotel was brilliant in the way they handled it.   We packed to be moved to an other hotel, an interesting experience in the pitch black with only the iPhone lighting app to see,with.  The value of a well established set of rituals to both unpacking and packing came through as I missed nothing!   We sat around the bar for a few hours before it became evident that a move would not be necessary.  Throughout the staff were so cheerful and polite the whole experience was almost a pleasure to live through.  The next day they proved the quality of their care giving Tony a bottle for his birthday, something they could only have picked up from his passport at checkin.  One of best hotels I have stayed at by the way. 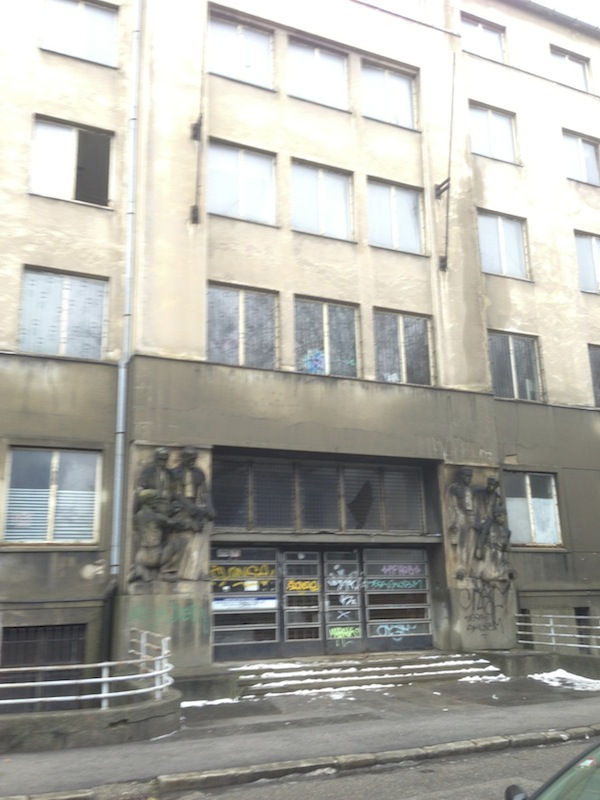 It's my third visit to Bratislava this year.  The first to run a two day workshop on complexity.  The second a river trip down the Blue Danube during a insit to Vienna to plan this workshop.   I'm starting to get to know the place and appreciate its architecture and people.   The Church of St. Elizabeth, more commonly known as the Blue Church is a real treasure.  Immediately opposite it is a decaying remnant of soviet realism (pictured).  The walk from here down through the Old Town to the Danube is interesting, but I have yet make it to the castle.  That an a promised bar crawl to compare experiences of the 70s with some of the UNDP staff is an irresistible draw to come back.

The return via Vienna airport seemed uneventful until we were set down the wrong air bridge to board, ending at a suddenly exist to a void with no plane.  Fortunately no one was so distracted as to carry on walking,but I tweeted the experience which gave a real opportunity to my followers to entertain themselves. Paul Klipp suggested that Austrian Airlines were operating a JIT policy, which made sense of John Bordeaux's suggestion that I step out in faith.  Pride of place however goes to Jim Benson who said Expecting there to be a plane is pure waterfall.  Pull the plane, Snowden!  Haven't you been reading our rhetoric?.

So a good two days, some great projects to start  working with interesting and intelligent people and a slightly surreal ending to the trip.

Yesterday I referenced the tragic events in Connecticut.  The day before at the MIT Press ...

A Thing which seemed Thingish

I drove up to Warwick University by way of Bath this morning.  Bath was for ...