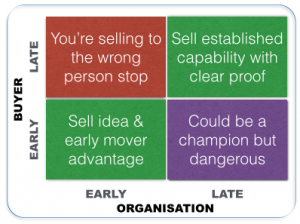 It has been a busy weekend with our management meeting taking place in Bicester.  Most of us are in the UK these days and that is a sort of compromise between the three households that provide five members of the team between them.  Michael flew in from Canada, by way of work in Denmark and teaching with me in Zurich.  Zhen made the flight from a holiday in Japan.   Now we do have conference calls, but there is nothing like being together.   A lot on at the moment, but we found time yesterday to focus on defining and creating demonstrators for some of the key SenseMaker® capabilities around employee engagement, investment appraisal and real time marketing.   We have all of that capability at the moment but we need to make it easier for people to grasp the what it will do for them.  It is all part of the natural life cycle of products and this is the third time I have been through it in my career.  You start with the enthusiasts who will buy (and part fund) and idea, then the market shifts and people now less concerned about how you do it, more about what they will get.   Making that switch at the right time is critical.  Too early and you invest without return, too late and the market moves on, often to weaker competition.

Back in pre IBM days I worked on this idea using Moore’s Crossing the Chasm as a guide and it paid dividends with the Genus programme I ran there (combining OO with RAD/JAD and Legacy System management for those interested).   We even produced a grid which I have shared above to help train sales people.   The idea was to make people aware of two contexts: firstly that of the organisation, secondly of the buyer in that organisation.   Now all of this seemed right at the time, I now have much more of the theory to explain why it worked.  But at the time it felt right and it worked.   However when I tried to repeat it in IBM it fell flat, the context was completely different.   If I could have that time again, knowing what I know now I would have created a series of similar things, based on theory copying aspects of the Genus programme imperfectly so they could adapt to an IBM environment, or even exapt if I got it right.   That however is water under the bridge.

So I recreated the matrix and it still have some learning.  It contrasts early and late adoption between buyer and organisation.   So you have four options:

If I was still training people I would expand it a bit, map onto Cynefin and various other material including cultural mapping with SenseMaker®.  But its not bad for something now 19 years old.

One of the things I am enjoying at the moment is the way a lot ...

It was a bright cold day this morning and I had to take the backroad ...