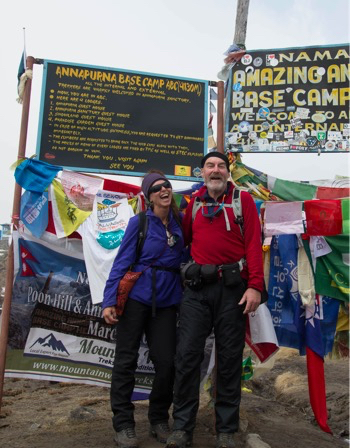 This picture was taken two weeks ago on Easter Monday when the trekking party of which Eleanor and I were a part made Annapurna Base Camp. A month short of the third anniversary of that day in Auschwitz-Birkenau when an email informed me that I had Type Two Diabetes. I have told the story of my reversal/arrest of that condition elsewhere but this was the culmination point of a journey back to health. Three years ago I was out of breath on the South Downs Way using photography as an excuse to fall behind friends and avoid conversation. Now I was over four thousand meters up having climbed some seven and a half thousand meters to get there over six days. I hadn’t lagged behind in the party either despite being the oldest and didn’t suffer from the altitude.

That diagnosis turned out to be the best thing that ever happened to me and changed my life. It has some impact on my daughter as well as her master’s thesis was on the anthropology of male diabetes. She and the rest of the family really helped in the process as did many friends. Getting to the base camp therefore was a moment of catharsis in that journey, which continues. I’m now planning three five thousand meter passes later in the year with the same guide, Ram was truly wonderful. I will backfill this blog with my daily diary of the trek but that will take a week or so.

A week ago I was packing in the hotel before heading back to the UK, arriving in the evening and picking up a hire car for 13 hours at home before returning to Heathrow for a flight to New York for a night, thence to Banff and on to Paris before heading up to Bangor today for my inaugural lecture and launch of The Cynefin Centre tomorrow. A frantic week and lots to occupy this blog over the next few weeks. But the trek will stay with me for ever. Not just for the achievement but for the company of strangers; we knew no one when we met in Kathmandu at the start, but the end we had shared conversations at a levels of intimacy you normally get with life long friends. At one point I said that no one would go on a trek like this unless they were worth talking with and the evidence supports my assertion.

For those who want to see the pictures they are all up on Flickr.

Catharsis (from Greek κάθαρσις katharsis meaning “purification” or “cleansing”) is the purification and purgation of emotions—especially pity and fear—through art or any extreme change in emotion that results in renewal and restoration.

My main engagement today was to present on the application of complexity theory to forecasting ...

Berlin has always been one of my favourite cities since I used to cross under ...