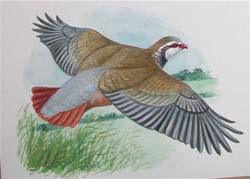 The saga of Christmas for the last couple of decades has involved getting into town by 0600 to collect the turkey from the Butcher before plunging into Waitrose when it opens at 0700 to fill a trolley with all the necessaries for multiple meals over the next few days.  This year I also had to clear the kitchen of the debris of an overrunning kitchen development.   Never trust someone who says they have a reputation for finishing on time.   I should know by now that what people tell you they are good at, is generally the inadequacy for which they are most frequently criticised.  So something that was meant to be complete in November is still incomplete and it will be late January at the earliest before it is finished.

Relationships came to a head when an accidental reply all on an internal email within the Snowden household resulted in a parting of the ways as the supplier now knows what we really think!  That means that while we are operational in the sense of having a functioning Aga, multiple cupboards and built in freezer and dish washer everything else is a little up the air.  So on return I had to clear rubble and coverings, move the fridge back from the lobby, level it and generally clear up.  Temporary shelves in the larder and three hours of solid work later the fridge was stocked and the table and cooking areas clear.   I could then indulge myself stocking the wine cooler, itself an indulgence with two temperature zones.  Critically it has a lock ….

So its now coming to the end of the day and I am still in yesterday’s clothes and the study is a mess but the kitchen is workable.   Daughter having been dispatched to help out the restaurant that provided her with employment for several years while she was at school, its now time to cook the partridge I bought on impulse this morning.  One of my favourite dishes and I going to serve it new potatoes, braised fennel, green beans and chard.  After that it will be time to work out schedule for tomorrow; that normally means me staying up to 0200 or getting up at 0400 depending on the weight of the turkey, but its all part of the tradition.

On Boxing Day I will start the curmudgeon series but tomorrow I going to take off from this blog and email etc..   I worked and travelled right up to yesterday so Christmas Cards and the like have not been actioned for which apologies.   I’ll do something more elaborate in the new year.

A rather complex set of circumstances involving the family, two cars and the need for ...

I promised an attack blog for each of the twelve days of Christmas and received lot of ...