I’ve been using the complex domain model for some time now since I first published it.  One of my main aims was to move away from a simple categorisation of methods which is the all too frequent use of Cynefin into a more nuanced and varied understanding of complexity.  There is a lot more to do here, but it’s going in the right direction,

Its gone through some minor changes but I don’t intend to repeat the descriptions of the dimensions here – read up on the link.   The main change is to clearly identify the diagonal as the line of coherence and to clearly identify transition to disorder at the vertical and horizontal extremes.   The idea is that if you are on it then things are OK, if you slip off it you have problems and you have to return to the line as show above.

The other stylistic change is to make things simpler by using the nine elements of the three by three matrix as distinct areas.  I think my earlier version with lots of circles and ambiguity was better but it cause some confusion and understanding is more important in this case as the compromise is slight.

So, assuming you have read the original post or are familiar with the material read on! 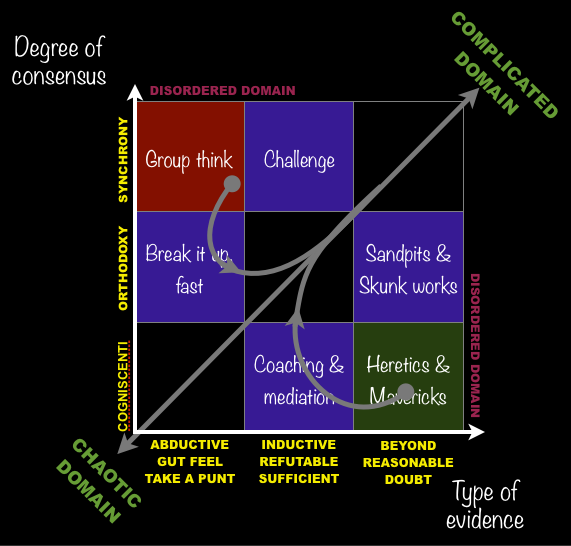 The bottom right is the domain of Heretics as before but I have coloured it green as its something to use. Also as before the two strategies are to provide a coach/mediator between the upholders of the true faith (yes I am being ironic) and the rest of humanity.  Actions now are blue.

Group think is in red as undesirable and I have added Challenge as an action to Break it up.   That applies where there is some evidence as opposed to no evidence.  if we are climbing vertically we need to break things up radically, while if we have slipped off with some evidence, albeit not beyond reasonable doubt then a challenge may be enough, radical disruption might do more harm than good.

That leaves us with the three diagonal boxes that cover off the line of coherence.  All of these are valid and in the complex domain model we can of course move in both directions.  Increasing constraints through evidence and buy in to move from exploration in the complex domain to exploitation in the complicated domain.   Equally we can move in the other direction by creating new problems, introducing new data, increasing challenge and the like.

Now one of the big problems is that most people, even when they understand complexity, start in the centre.   They run a single safe-to-fail probe or a token one or two, often fail-safe in nature!  They assume that the direction is known or knowable and that purpose can be achieved.

The problem here is that we then neglect the bottom left corner which is to use a cliché, on the edge of chaos where the most creativity is possible.  This is the sub-domain of expatiation where the most opportunity lies.  Failing to start there reduces scanning and resilience.

So in today’s keynote I took that domain model and then applied it to Scrum and Agile.   I’ll pick up on that tomorrow, but if you want to get ahead the slides and podcast are now available.  Not the best of quality on the pod cast, but it will be available as a full video on the ACE web site in a weeks time.

… when engineers run the world?

I've fallen behind on this blog over the last week and I have some backfill ...

Knowledge has to be situated

My original plan for yesterday was to spend the day walking around Krackow with the ...