The advanced seminar we held in Seattle earlier this month was very useful in developing a whole bunch of stuff, but in particular the domain models.  I need to acknowledge all those engaged in this and will do at the end of this series on the Cynefin domains.  There were three major changes, two done in the session and one by me on reflection afterwards

1. Wording and label changes on most of the domain models

2. Rotating them 45º to make the coherence path clearer

3. Stepping them so that one overlaps with the other

I will elaborate on the third of these towards the end of this series.  For the moment I am going to focus on the complicated domain which saw several changes.  You might want to check out the last manifestation of this domain model in an earlier post before reading on; or just take it afresh!

Also remember – these domain models are the major feature of day two of the new training programme (which can be taken stand alone).  I will really be working them in September in Wokefield Park

Remember a domain model is a three by three matrix.  In the earlier manifestations the bottom left to top right diagonal represented the pathway of coherence, moving between the domains.   With the 45º shift that now becomes a horizontal line with a twist.  The matrix has dimensions and in effect the top and bottom (on the 45º version) are slippage areas into disorder.  Action is required to prevent that, or to recover.

So here is the new complicated domain model: 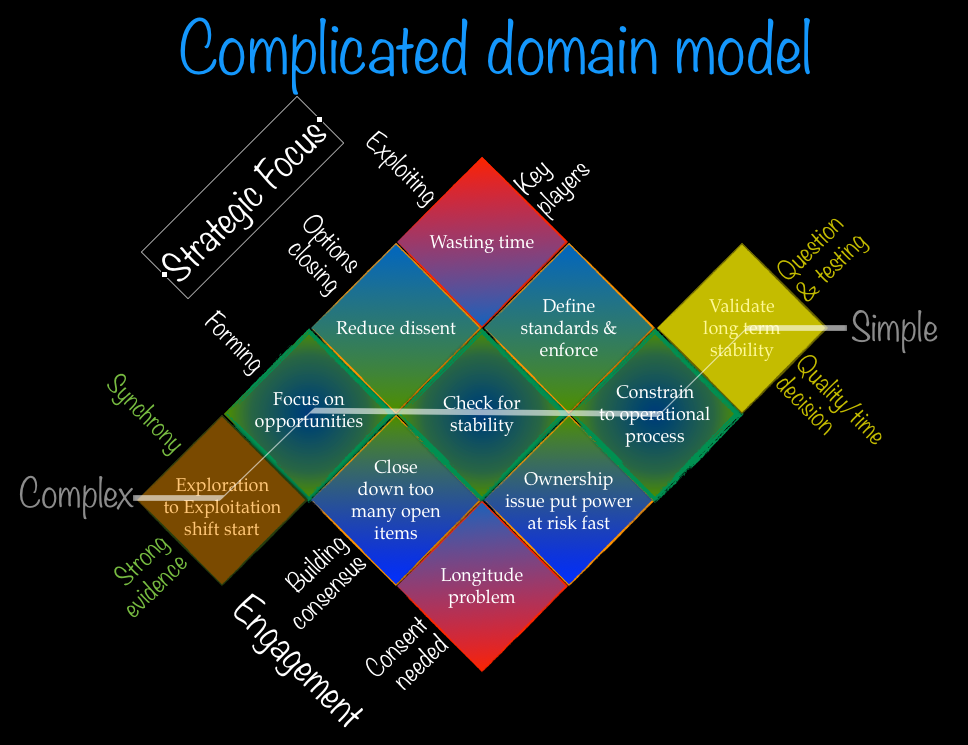 In terms of the representation the former top right (now extreme right) of Complex and the bottom left (now extreme left) of Simple are included and show as a step up.  As you can see the line of coherence is not a straight line, more energy is required to move to a more ordered domain so it is shown with a gradient.   That will make more sense when I put them all together later in this series.

The dimensions change name to more accurately reflect the way I have been describing them.  So we have:

That means the line of coherence runs through three stages, left to right.

The transition after this may be to simple, but only if the stability of the initiative is going to be stable in the longer term.

The top extreme is where we have shifted to full exploitation without engagement of the wider community, keeping things tight to our chests then assuming everyone will just make it happen.  That is likely to produce compliant responses, disguised real activity and so on.  It is a lapse into disorder.  Two strategies exist to prevent it:

The bottom extreme is different.  This is where we have engaged two many people before the ideas are fully formed.  That means that entrenched ways of doing thing will actively compete with novel and new ways (hence the reference to the Longitude problem).  We have been guilty of premature engagement.  Again there are two strategies:

Now that assumes left-right and its enough for now.   Right to left transitions are rarer and I may subject them to a future post.  More on the other three domains, disorder and the whole step change/energy stuff in future posts.  Next up tomorrow and in the mean time all comments appreciated.

Apologies for typos, I need to post this and leave so I don't have time to proof read!

Reporting back for service

I'm in danger of having a whole month without blog posts, so just as August ...

The last day of the meterological summer and my original plan was to spend the ...