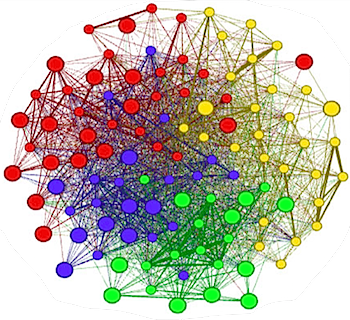 I recently heard that Complex Acts of Knowing had been assessed as a classic paper in Knowledge Management, moreover it was in the top ten based on citations. I suspect that is because it was one of the first papers to connect complexity science to knowledge management. It was also one of the first to challenge what I now call the Nonaka Orthodoxy . It was not the first article to be based on something approaching the current form of Cynefin, but it was the first of any note. It was the first article written under the influence of Alicia Juarrero and my growing understanding of complexity theory; so its true origins is probably a workshop at IBM South Bank with Jack Cohen, Brian Goodwin, Yasmin Mirali, Peter Allen, Mike Lissak and others where I was ably supported by the tolerance of Sharon Darwent (not for me to be clear but that is a tale she will have to tell). Either way to get to the point; the key aspect of that article was the need to manage connectivity between informal networks that could then become formal or stay informal at need.

Now it came back to me, in part because I have been blogging about Cynefin recently to provide some updates that can be referenced. That is in preparation for both The Book and a major article on the underpinning theory I am plan to work on with some New Zealand academics. In part it is thanks to a link from Stephen Gray to an interesting paper from the University of Pennsylvania which can be summarised as follows:

Now I came to a similar conclusion from the work in IBM reflected in Complex Acts of Knowing. Smaller self-orgainising teams with overlapping membership were more effective in knowledge flow than formal communities. The fact that the IBM Knowledge Management function wanted to make them all formal was just another nail in that coffin as far as I was concerned. The paper also shows the value of models to provide insight. A famous case showed that putting a barrier in front of a fire exist improved flow and exist speed which again was counterintuitive at the time. Models, like correlations have huge utility in sense-making provided we don’t take them as determinant or causal in other than limited cases.

But as I thought about it then there are some other issues that come to mind:

Now that provides a rich area for explanation, and an understanding that human complexity is a layer of complexity higher than you see in termite nest building or agent based models. My focus for years, along with others, has been to create an understanding of human systems in which complexity theory is one source. That workshop back in the SouthBank was a seminal moment in getting that started.

I’ll expand on all of those points in the coming weeks. But tomorrow it is back to MassSense and Crowdsensor – watch this space

The most chilling aspect of Animal Farm comes right at the end: “The creatures ...

Your thoughts needed now – Grexit? What next?