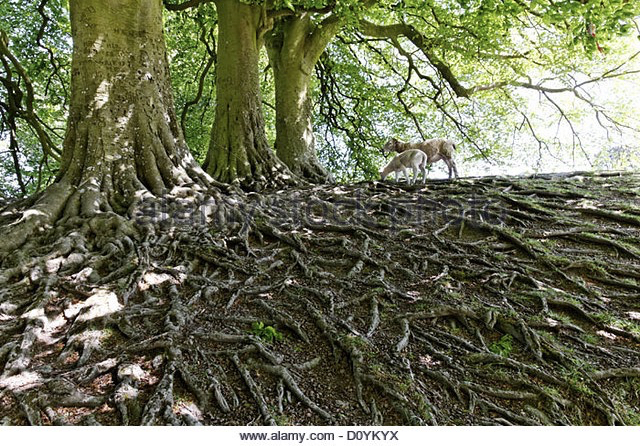 Following last weeks highly successful Cynefin Retreat we had a Cognitive Edge management meeting at my home in Wiltshire. In need of air I took people on the standard local walk around Avebury and introduced them to the Tolkein Tree (pictured left) which acts as a sentinel as the Stone Circle crosses the comparatively recent coach route between London and Bath; a Jane Austin crossed here moment. Local legend says that Tolkien used to sit here with his pipe and it inspired Old Man Willow in the unjustly neglected In the House of Tom Bombadil chapter in Lord of the Rings. Three beech trees whose exposed roots are deeply entangled were a location of imaginative play for my children as for many others.

They, along with the header picture act as good visual metaphor for one of the key aspects of a complex adaptive system, something heavily emphasised on the Retreat, is that how things are connected generally matters more than what they are. This along with the fact that such systems are dispositional not causal is one of the easiest things to say, but one of the most difficult things to understand. Especially for anyone brought up in a culture that emphases the role of the individual and causality which is the case in the dominant cultures of North America and northern Europe. It links in with the idea that nature may deal the cards but nurture plays them; if anyone knows the origins please tell me, I suspect its Søren Kierkegaard but I’m not sure and internet searches tell me nothing. Now we know that is not the complete picture, epigenetics means that the cards themselves can be changed in shorter timescales than most people think. Phenotype (which is of course all about connections) can amend genotype.

This naturally links with my new work on constraint mapping which I presented at the retreat and which will be formally taught for the first time on the coming London and Sydney advanced Cynefin courses. Make the most of those by the way, outside of retreats those are the last public courses I am doing at least for 2018. Understanding how things are connected, and how and when they can be changed is key to any action based understanding of complexity. My original typology of resilient and robust constraints is about to be expanded to includes entrainment, entanglement and exaptation as aspects constraints; more on that this week.

The critical point here is both pragmatic and ethical. Changing how things interact, especially people, is a lot easier than changing the nature of the things. It also seems to be more ethical. As a manager you are, within constraints (sic), entitled to define and enforce the nature of interactions in the work place, but starting to tell people what sort of people they should be, let along trying to make them happy through modern equivalents of the company song, are dubious and immoral in practice. Our new 360º service now out of beta does exactly that. It allows a leader to see how people perceive interactions with the leader rather than some evaluation of that leader. Any qualified coaches should get in touch if they are interested in being part of the initial roll out.

More on all of this throughout the week, for the moment I’m getting this up to break the recent blog drought which stresses me more than you!

Over the years I have had various emails, social media links and other links to ...

The vexed question of certification came up in conversation yesterday. We’re going through the process ...