It's been the best part of twenty years now since I moved out of operational and strategic management  roles and was granted the freedom to play with ideas following IBM's take over of DataSciences.  Not that I hadn't played with ideas before, but I was no longer pulled back by operational needs although IBM bureaucracy had a similar impact until I realised most of it sorted itself out if you ignored it.  Now my background was decision support; I had designed and built systems for that, written my MBA thesis on the subject and generally was fascinated by the human aspects of decision making in the context of technology augmentation.

The fact that information could now move quickly, if not then in real time, to allow executives to manage international organisations produced fascinating changes in behaviour and expectation.  It didn't matter if it was corporate reporting or supply chain management (the two areas in which I built software and service offerings) all the neat and tidy systems diagrams broke on the rocks of human response.   Either defiance or workarounds, and with the growth of Process Re-engineering an underground of informal networks that made systems work despite themselves.  So called efficiency improvements often created huge workloads for those informal networks thus rendering them less effective (and come to think of it less efficient as well).  The resulting stress and focus on short term measurement had a negative impact on intrinsic motivation, customer service, innovation and so on.   In this context the recent growth of sick stigma is a positive sign: at the end of an idea's life cycle things that clearly have not worked are taken to excess as people desperately try to avoid admitting they got the whole thing wrong.

So given all of that it was not surprising that I got engaged in the then emerging ideas around knowledge management which in turn took me to narrative and complexity but that is a story for another day.  What struck me then was the complete failure of people to take context into account.  People would find an outcome they liked and assume it could be achieved by copying current practice without acknowledging the evolutionary context that had given rise to it.  Communities of Practice grew (as I remember it) from the popularising of Étienne Wenger' study of Boeing (Yes I know it was not his first work).   The popularising distilled an academic research paper into a series of simplistic recipes that combined with Lotus Notes to create a whole movement which is still around to this day albeit in a much diminished form. 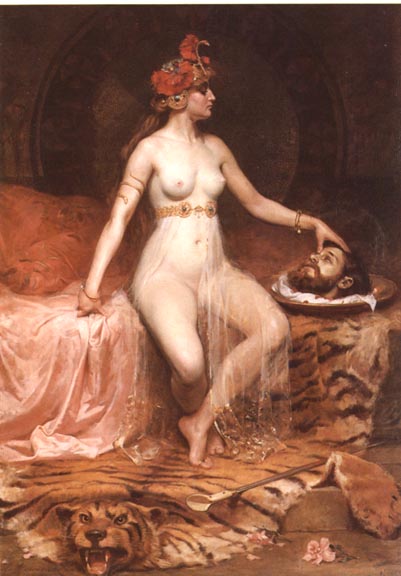 Now at the time I was one of the few (very ,very few) voices that challenged the fad for communities of practice and also Nonaka's SECI model which appeared to be used as a sacred object in the KM Community.  To be the voice of him that crieth in the wilderness may result in satisfaction later but at the time there is always a danger that some dancer will require your head to be cut off as a reward.  If you substitute IBM Management Consultancy for dancer then I escaped but it was a close run thing at times.  (Note: Painting Salome by Pierre Bonnaud and that look so reminds me of John)

In respect of communities of practice my main objection was the failure to pay attention to context, something that is generic to what I call a crude empirical model of management science research.  The point of the Boeing case was that the various practices were the result of complex and deeply contextual evolutionary history.   If you wanted to gain similar benefits then you needed to follow a similar journey to allow a contextually unique solution to emerge.  It was around then I started to use the mantra Replicate the starting conditions not the end point to make the point strike home.  Cynefin developed in this context as I started to argue that informal communities had to be managed as a complex ecology and that formal communities should emerge.  One of the first Cynefin papers Complex Acts of Knowing is all about that process and how to make it happen.  It is also a pragmatic approach, it starts from reality rather than from an idealistic design of how people should share what they know.

Context came up again in my keynote to KM Europe.  Nancy in her response chided me somewhat for criticising past not current knowledge management practice.  She also mentioned the use of Facebook like capability by the various intelligence agencies as one example of this.  Interestingly she made the point that no one really participated until the Mumbai bombing at which point everyone helped everyone else.   While the participants were talking Nancy and I chatted, we have known each for some time and have a high degree of mutual respect despite some major differences.  I raised the question of context using Weick and Sutcliffe's work on high reliability organisations as an example.  I argued that the cases they study in the main work in crisis or near crisis situations, have crew type structures and the like.  So I can replicate the behaviour of fire fighters if I burn the office down, but I can't transfer practice from one context to another.  We were agreed, and also that both of us think Weick is brilliant, but Weick writing with Sutcliffe is less so.  Nancy suggested that Sutcliffe had managed to popularise Weick's work, I think I was less complimentary!  I'm afraid that I also disagree with her that KM has changed that much, too many people in KM are now within IT Departments gaining black belt certification for me to accept that.  There are exceptions, but there always have been.

So in my final summing up I referenced back to the danger of taking practices that work in the context of a crisis and assuming that you can replicate them outside of the practice.  Even in a military environment peace and war time practice differs greatly.  I argued, as I have argued for years, that people will also collaborate to survive, the issue is how to get them to work together and share knowledge before the crisis hits.  That had been my argument about micro-narrative and portfolio safe-to-fail experiments.  Context, is well context and we have to work with it not ignore it.

5 responses to “Context, is well contextual”

KM Europe and a respondent

A flying visit to Amsterdam (well train in from Nice then a flight home) to ...