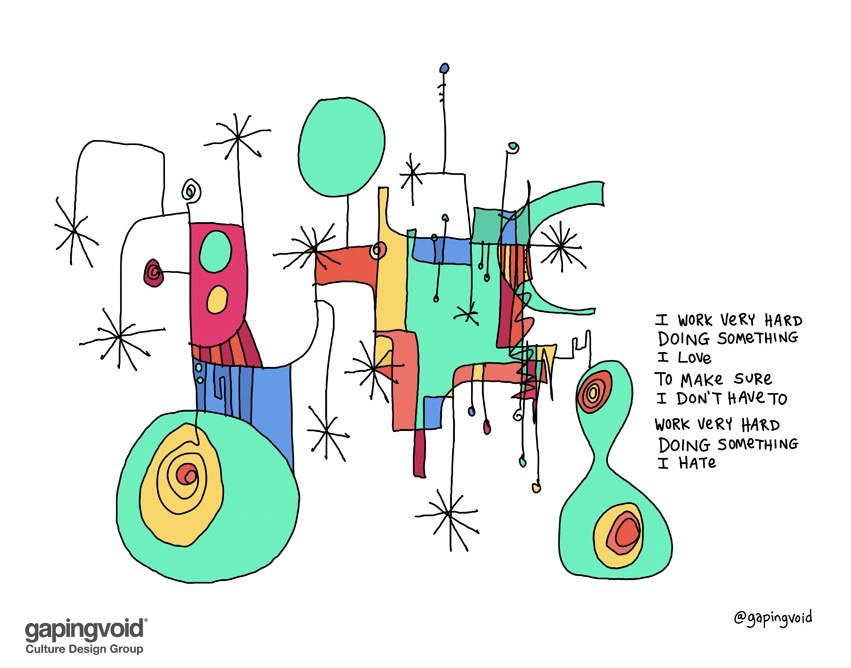 My last three days put this evening’s Gaping Void cartoon in context. Monday I picked up Kate from the Future Generations Commission for a meeting en route to a management meeting in Bangor. Three conference calls on the drive back home filled the journey, but it’s a long journey and I had to pack for two weeks away that evening so I got to bed at midnight. 0430 saw me wake up 15 minutes before the alarm went off to allow me to leave the car at Heathrow and head into London to queue up for a visa for India. That itself is stressful but was followed by three meetings that filled the time before returning to collect the Visa and then a mad dash to get the flight to Brussels. Landing late evening I had a meeting before getting to bed at midnight, next morning a keynote and a dash to the airport for the flight to London which I made with ten minutes to spare. Then a drive to Cardiff or a keynote to the Wales Chief Nursing Officer event before returning to Heathrow too snatch a G&T before boarding for Bahrain and the first of two red eye flights that will see me in Hong Kong for the weekend. One 10-15 minute delay at any stage in the last two days would have thrown the whole process.

Now I tweeting progress and got support along with several comments on my sanity, but to be honest I was enjoying myself. Key to travel is not getting stressed. Planning helps and I have the British delight of exploring options with a good timetable, something that the web has indulged. There is a rhythm to a tight schedule and it can be an iPhone fetishist dream to play with navigation and other systems. But the real and substantial point is that meeting people from many backgrounds, exploring interesting ideas creates energy rather than reducing it. Yes there are frustrations, concluding the lack of time to write and respond to emails which can be problematic, especially if your lack of time is exploited rather than supported. But overall the variety of experience is its own reward.

I’ve know (and know) people motivated by jobs with more routine and more free time. I’d like to balance things a little better to have more time for walking and the bike. But the days of a 0900-1700 working session with a predictable commute and an evening at home are years behind me now and I will probably die ‘on the job’.

2 responses to “Coping with ‘stress’”

I should probably have watched out for today’s Gaping Void cartoon before mentioning humility in ...

One of the deeply negative aspects of the knowledge management period of a decade or ...