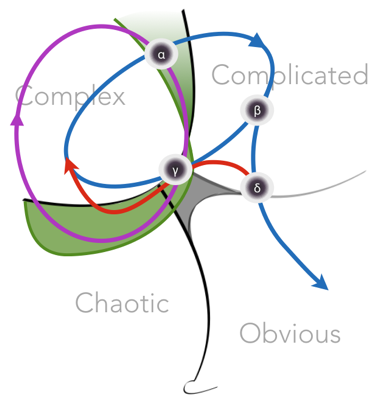 The introduction of liminality to Cynefin necessitated a slight rethinking of the main dynamics within Cynefin.  To be clear multiple dynamics are possible but over the years these have emerged as the dominant ones.   As the name implies the dynamics in Cynefin are all about movement between domains.  Such movement can be achieved by shifting the nature of the constraints – for example using heuristics (a type of enabling constraint) allows for emergent behaviour while rules (a type of governing constraint) in effect create a boundary condition that limits the actors an the context to a greater degree.  Constraint mapping, its representation in Cynefin and links to the whole known-unknown-unknowable matrix will form my final post in this series tomorrow.

Key to Cynefin is the idea that no domain – with the exception of inauthentic disorder – is either right or wrong, it just is.  I’ve seen too many people fall into the trap of saying something along the lines of my method is complex, theirs is merely complicated  and that goes along with un unthought demonisation of Taylorism that in many ways showed more respect for people that the current popular forms of systems thinking.   Domains have different qualities and we need to understand that and act accordingly.  If we want a behaviour or outcome which is not authentic to the domain then we first have to shift the context – move between domains to allow that to be possible.

Dynamics also link to ideas of resilience and sustainability.   Think back to the energy gradients of yesterdays post and you can see that keeping things in the complex domain, shifting them to complicated is hard but if you do, then and only then can you fully exploit what you have created and critical scale by aggregation or repetition.   In the complex domain scaling is only achieved by decomposition and recombination at an optimal level of granularity which means there is a degree of constant lovely, retrospectively coherence but not predictable.

Those familiar with the old dynamic framework will see the differences with the older representation and they rest on an inflection point in the liminal area of disorder, the gamma point above.  I’m still not sure on aspects of this and its a work in progress.   But to get there lets describe the four dynamics shown above.

Now there is more work to do here – particularly on the inflection points but for the purpose of this update that’s it!   Final post tomorrow.

The introduction of the liminal version of Cynefin was probably the most significant change in ...

I was searching for my original known-unknown-unknowable matrix for today’s post and, as you do, ...