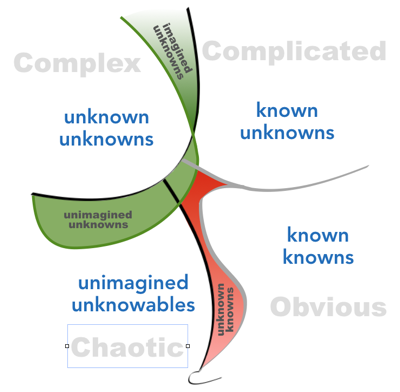 In my final post in this update series on Cynefin and I’m reserving the right to change things when I think about it more.  I’ve been playing with options here on trains to and from particularly dark productions of tragic operas and the experience may have influenced by thinking.  Lets start with a variation on the normal representation of Cynefin which I’ve drawn a few times, but this is the first time I’ve published it.  Here I show the danger zone between obvious and chaos as an extension of the inauthentic aspect of disorder.  In earlier years this was sometimes called the complacent zone.  It is a type of liminality but its one you are not aware of until you fall over the cliff.  So its less a state of suspended transition, more a case of being suddenly suspended with no prospect of recover – remember the Coyote in Roadrunner if you want an illustration.

Many many moons ago, before IBM in my Data Sciences strategy days, the first time I ever got the thought leader  label I created a matrix between known and knowable, and then a second overlapping one between knowable and unknowable.   I used it a lot in C level workshops and it came over into my work in IBM and I presented in a few times in Washington before the language got toxic.  I didn’t originate it and, before you ask, I didn’t get it from Johari windows.  I learnt about that when someone referenced it after a session in the Dental Practice Board.  its not original although the extension to unknowable is I think mine.   When I was working on the HBR Cynefin article Mary and I decided to rehabilitate it and for the domains of obvious, complicated and complex I have made no changes.  However I have shifted chaotic from unknowable unknowables and added labels to the two luminal zones and the boundary with chaos.

I should say that I like this version of Cynefin but I haven’t got the drawing skills for it yet.  It may be more of a brush stroke in which entry into it is imperceptible.   Its now how I would start a discussion but one of the values of CYnefin is that you can dive deeper.   I’ve also got some work to take the domain three by threes I developed for each of the four main domains and add liminality and this language.  That will take a bit of time.  And apologies for leaving the selection box on chaotic when I did the screen shot.  I just can’t be bothered to do it all again!

So lets run through how I am using this:

Banner picture is a view at dusk from the col between Mynydd Perfedd and Craned y Filiast looking towards Elidir Fair with Snowdon in background.   I’d planned to complete the ridge and descend to Nan Ffrancon but the walking and weather were so good I didn’t want to leave the tops so retraced my route back to Y Garn and down – a long but rewarding day and I wish I had the better camera for this picture.

I was searching for my original known-unknown-unknowable matrix for today’s post and, as you do, ...

I’m starting to think that it is only a matter of time before I graduate ...