Do not treat green pit vipers as tourist attractions

Its been a long week in Singapore with client meetings and strategy sessions linked to our impending launch of the iPhone and iPad versions of SenseMaker®  along with a host of other subjects.  Now for over a year now I have decided that my health deserves some attention so, regardless of workload, I have taken at least one day a week for some form of physical exercise.  That means a 50km bike ride and a 14-mile walk as a target minimum.  So it’s Singapore, it’s Sunday I propose to Michael and Peter that we set off for an early and walk around the MacRitchie Reservoir.  It looks interesting, starting with broad walks, the jungle rooftop walk, then completing the circuit around the southern part of the Lake.  That complete, the plan says we go to lunch in the Botanic Gardens then explore either the Gardens or add in Sentosa.  All a perfectly reasonable target in the UK.

Peter and I succumbed to the outdoor shops around Novena the evening before, both of us buying water bags.  I was after some very lightweight walking sandals but succumbed to the novelty of a pair of Vibramfivefingers (illustrated) thus joining the barefoot movement for the first time.  I should probably confess, before Peter tells the world, that the only water carrier in an acceptable colour and weight that I liked was one designed for women, but so what, it worked. 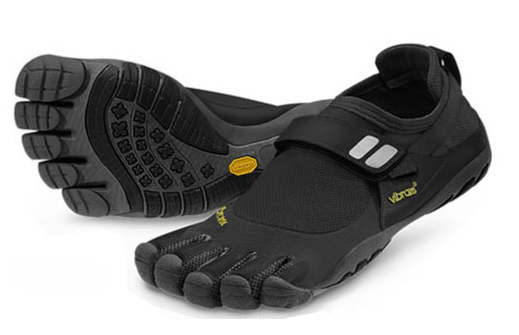 After I spent twenty minutes in the hotel persuading my right little toe that it could be separated from its neighbour we were able to set off.  I should say that the separation of toes was no mean achievement as the two have been inseparable for years thanks to be pushed together in too many shoes and boots.  From time to time they were united, but overall it was a pleasure to feel the ground underfoot and have the improved grip and posture which was promised (and achieved) by the manufacturer.   I’m going to have to work on toughening up my feet a bit, but they were good and eccentric enough to have value in that capacity alone.

Suitably equipped the walk started well, although I can think of several trailheads that are not reached by catching a bus for a 15-minute hop from the centre of one of the world’s major cities.  But such is the novelty of Singapore.  We set off on a path through the somewhat manicured jungle but soon discovered that strolling and talking were not possible.  We had to go in single file as cavalcades of runners went up and down the trail shouting for us to give way or simply barging through.  We eventually made it to the jungle top walkway which is every bit as spectacular as advertised.  Peter and Michael are pictured on that walkway below. 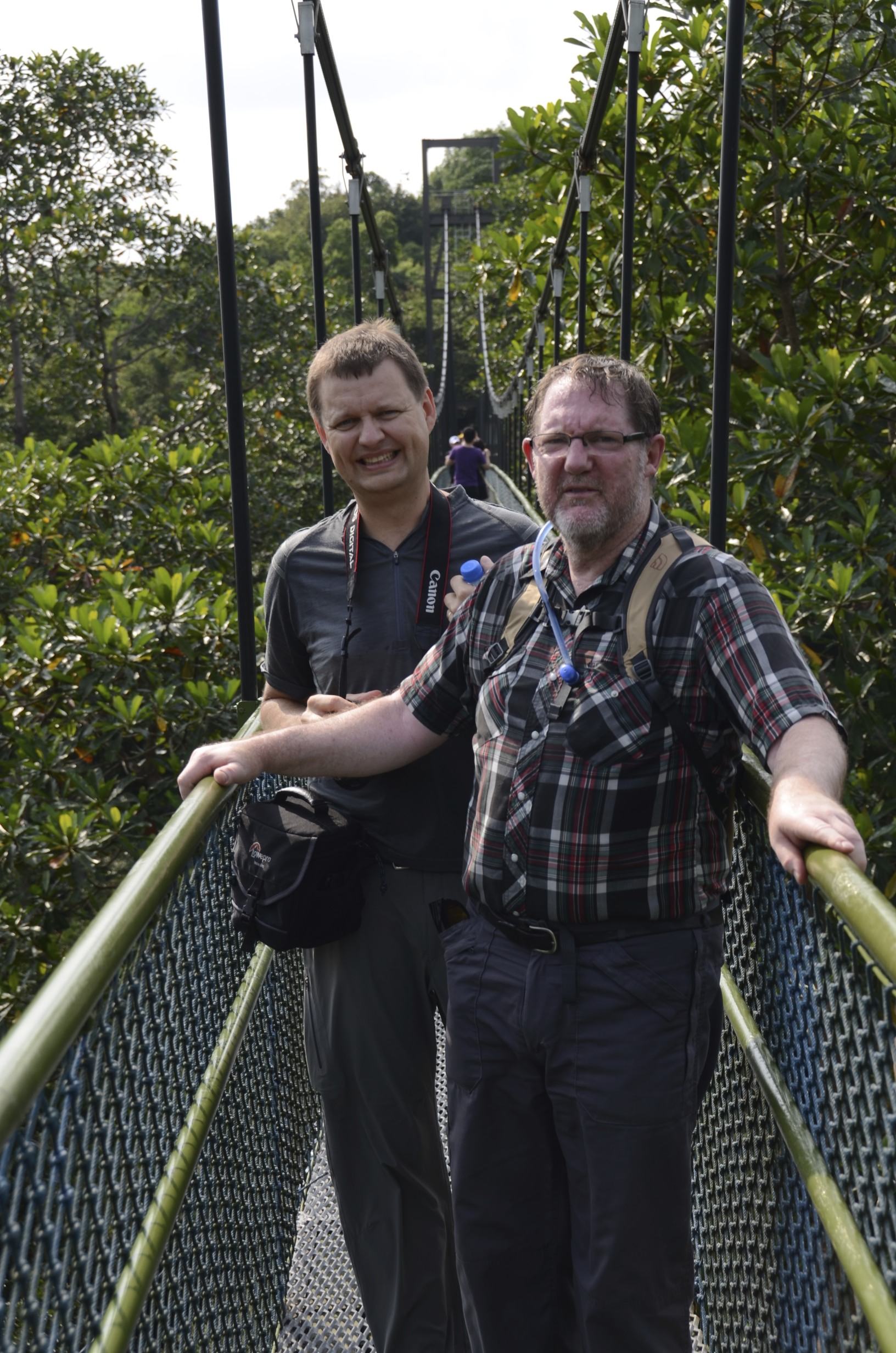 On exiting we were climbing up the path through a series of steps when our attention was drawn to a small green snake with an overlarge head.  We approached and started to take photographs (see banner) approaching it to within a few feet.   I’m still not sure why we were that foolish, but innocence is its own protection and I got a couple of good shots including that which heads this article.  Later that evening I tweeted the picture to see if anyone knew what it was and learned that we had been tempting fate with a green pit viper – the guide book says immediate treatment or death are the only alternatives.  David Williams then found a video of the yellow variety of the species and having watched it I ended up with the odd nightmare.  These things catch hummingbirds in the air!

The rest of the walk saw a variety of wildlife and increasing heat.  By the time we finished around 15 miles the heat was oppressive and after struggling through the botanic garden after a brief MRT ride we consumed copious quantities of fruit juice and resolved to give up on further exertions for the day.  18+ miles in the UK is one thing, but temperature and humidity reduce the range.

The one thing the walk did convince me of is that I have neglected the possibilities for walking in Singapore so I have mapped out some more options for the next visit and Ken has promised to find one over the causeway in Malaysia.  Next time I hope I will be more circumspect with the reptiles, but Singapore is so safe, you just assume that continues into the parks.

A longer than normal title to this post (from Martin Luther King) should not be ...

After due consideration, I've settled on sidecasting over the alternatives.  It has an edge to ...