The long sleep (see yesterday) and a family meal at the Fishy Fishy Brasserie (which I highly recommend) seemed to have knocked my Burkina Faso bug on the head so I activated my plan to complete another section on the South Downs Way.  I did the first section last year and despite many trips to Brighton since events have conspired against my continuing on from Exceat to Southease.   On my original plan this would have been completed on Thursday but illness had intruded.   Getting up I found it was a sunny morning; I had had slept well and felt good so I left the family to sleep on and drove down to the Seven Sisters Country Park to start the journey.   That car park has interesting memories of their own.  The best part of twenty years ago a day trip there resulting in my having to choose between precipitating Huw into the river in winter (he was perched on my shoulders the time) and falling awkwardly.   I choose the latter and badly sprained my ankle in consequence.   I had to hobble back to the car, while dealing with a much younger Eleanor who was determined to support me by holding on my hand; emotionally supportive, but it augmented the pain and slowed the path back to the car considerably. 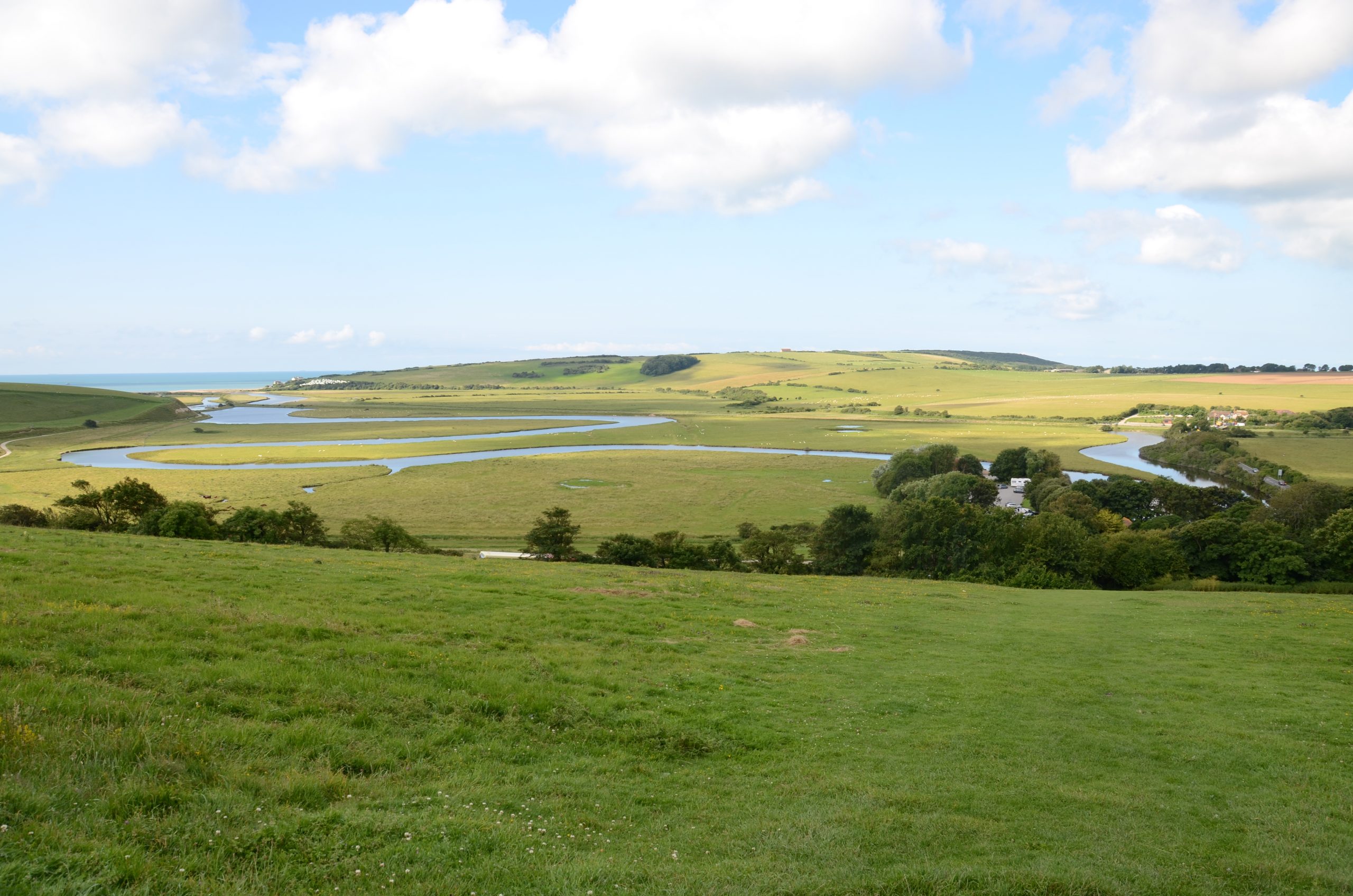 Putting those memories behind me I set off up the hill with views of Cookmere Haven in bright sunshine giving me an excuse to halt from time to time.   As I dropped through the shade of a wood I came across the first example of what would be a pattern all day – sponsored walkers.   In general it was evident that few of these people wanted to be there, were used to, or equipped for walking and were more interested in loud conversation than the views, wildlife and the silence of woods.  I suppose it was not an interest makes the sacrifice for charity more worth while, but the number on this section was excessive.  You feel there should be a rationing system, or some constraint on the colour of the charity T-shirts that were de rigour for all participants.  I often had to wait several minutes for the foreground to clear of such visual incongruities before taking a picture. 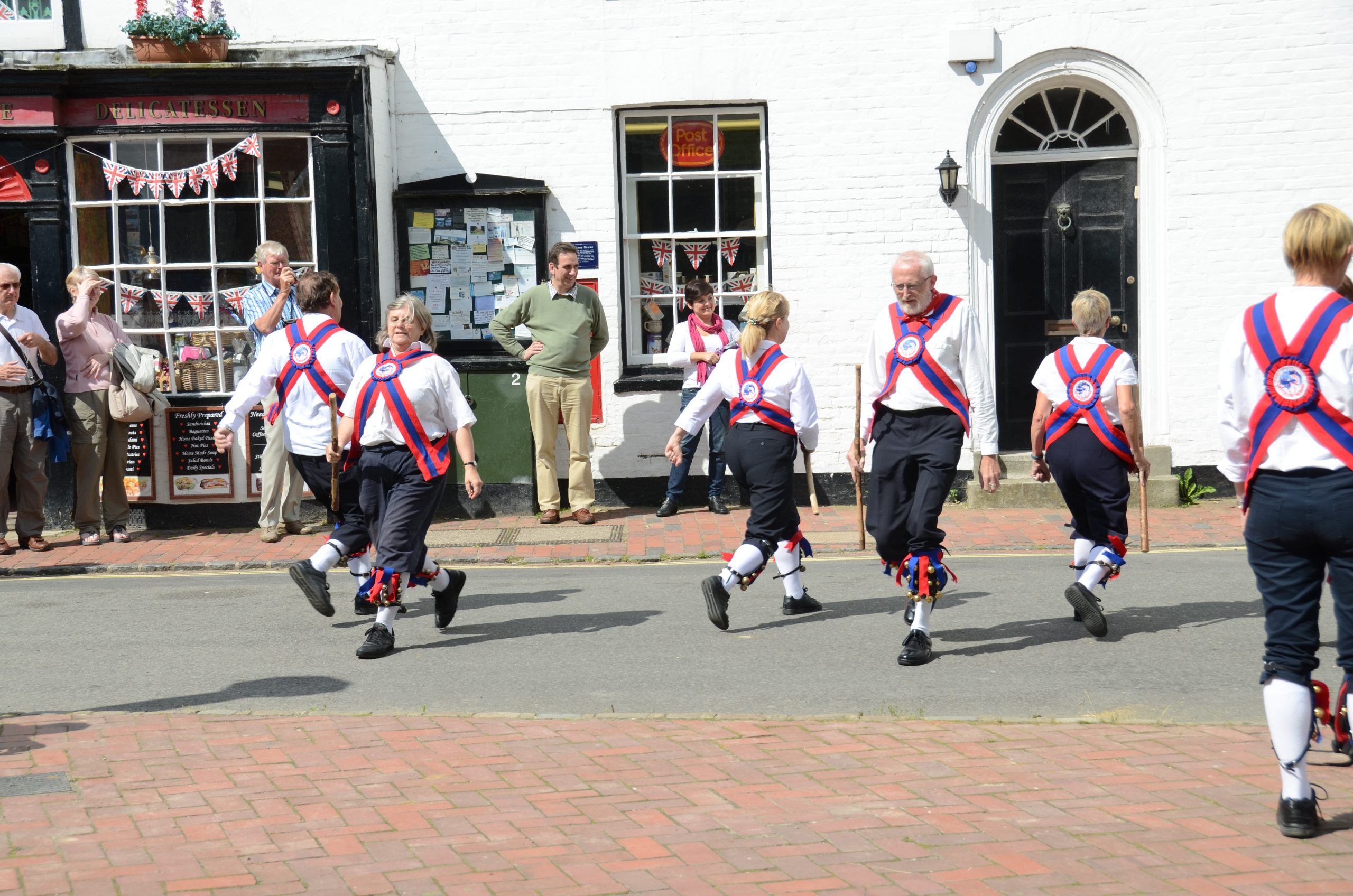 Sponsored walkers aside the first path of this section ended with a riverside walk to the quintessentially English village of Alfriston.  It was so quintessential as to have a group of Morris Dancers performing in the centre of the village.   I suspect this is a uniquely English phenomena but I am prepared to stand corrected.  From Alfriston one has to climb back up to the top of the downs on a road and then a track with little shade or interest.  But its worth it when you get to the top.  From that point there were only minor climbs to follow as I strode along Downland grass with magnificent views to both sides.  As midday approached the clouds rolled in, but the Downs formed a barrier.  The picture that heads this blog gives you an idea of the light, but there was more.  To my right the Downs drop to the English Channel and on that side it was all bright Sunshine, to my left, where on a good day you can see London, it was all black cloud and rain.  The dividing line was the Downs, but only the odd drop of rain could be felt.

I had hoped to get the train back from Southease at the end of the walk, to Newhaven then the bus back to my starting point.  But it came in as I was walking down the final hill so I missed the 0130 by three minutes.  Rather than wait for an hour I decided to walk back along the River Ouse which is tidal at this point.  I should really have chosen the western bank rather than the eastern as the walking was very rough on neglected paths, but interesting never the less.  The tide was coming in as I started but turned after half an hour creating that wonderful calm that flattens estuarine water at high tide.  An industrial final half hour I would prefer to forget, but I made it back to the car and the tedium of a two hour drive home was relieved by memories of a perfect walking day and back podcasts of ABS's Philosophers Zone.  Although the death of its presenter ALan Saunders a month ago was a real shock but more of that in the future.

Full picture set for those who want it

We passed the half way point on the Cotswolds Way at some point today.  One ...

Following yesterday's successful completion of stage two of the South Downs Way I moved back ...