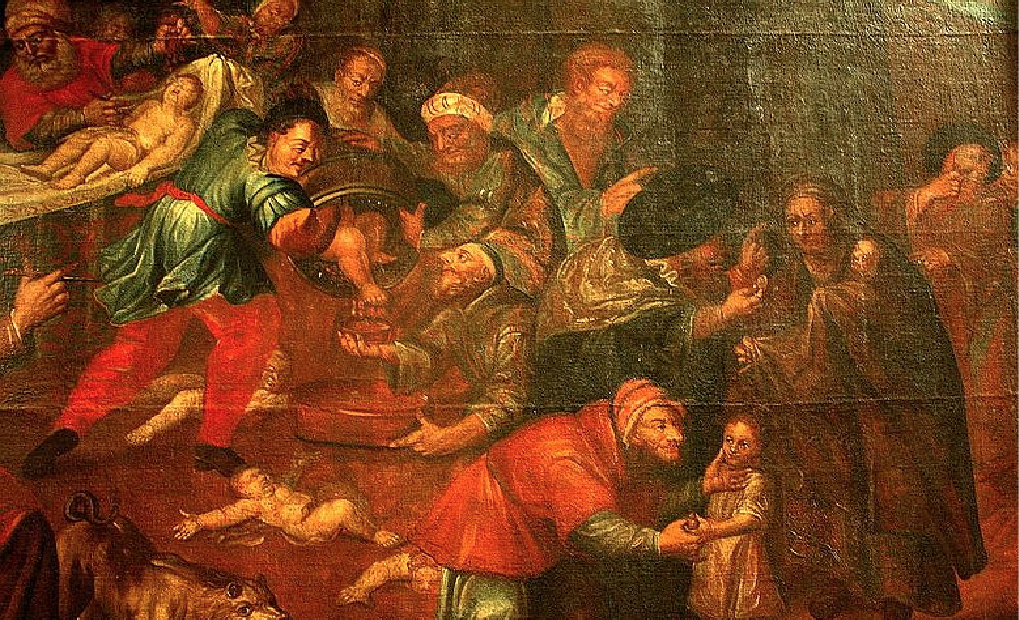 Attempts to see a performance of the Seven Acts of Mercy at the RSC were thwarted last night by the need to take my son to A&E after a cut sustained earlier in the day refused to stop bleeding. The play is based on Caravaggio’s masterpiece and astute readers will have realised I was looking to that performance to inform my final post. That reflection will have to wait for the January rebooking. This morning suitably bandaged and with The Tempest secluded for the evening we did a back stage tour of the RSC. Something I strongly recommend to anyone in Stratford with a couple of hours free. As a part of that tour we came to a cupboard lapelled human hair something that took be back to the 17th April 2013 when I visited Auschwitz-Birkenau for the first time. Anyone who has been there (and everyone should go) will remember the huge glass display case with the hair cut from the heads of over 140,00 items and contaminated by hydrogen cyanide. For that reason I chose a picture from Sandomierz Cathedral in Poland depicting the blood libel, they myth that Jews kidnapped and murdered the children of Christians to use in religious rituals. The picture still hangs there which raises its own questions. Neither I can I help but note the irony of my posting on this on day in which the monstrosity that is now the President elect of the United States choose to use twitter to undermine decades of work on the peace settlement between Israel and Palestine. Hopes there were already hanging by a thread, but even that thread has been cut by the bombastic populism that appears to be the new norm and hopes that responsibility would ameliorate the tantrums have also been dashed.

Now I started this series by arguing that we may never have been in a fact based society, instead we move through dominant tropes which allow people to reduce the cognitive load of assessing the evidence for themselves. For a long period we accepted the authority if the Church, then we deified science and the experts, now we are back to populism, following those who hate people we can demonise as a way of avoiding responsibility for the world we have allowed to emerge and which we seem set to destroy. If I had to isolate two important reasons why we have got into this mess then they would be:

So one pragmatic, one intellectual and I’ll happily expand on either if required. But going forward the issue is how are tropes formed and how can we influence them for the better. Especially in the echo champers of populism and scapegoating that are all too characteristic of the build up to fascism. I chose the title for this post deliberately, in is from Cicero and is commonly translated as As long as i breathe, I hope; very apposite in the current situation. So there are some ways forward and I offer the following list as a way of getting started:

All of this is an exploration, but we need new ways of thinking and acting that allow us to have some base level expectations of human behaviour. The tyranny of the focus on the individual at the cost of the clan, the assumption that the means of exchange (money) is more important that the things exchanged and the increasing desire for simplistic labels and solutions has to be overcome. If not then the blood libels that currently inform politics will cause levels of failure from which we may not recover given the fragility of the eco-system of our planet. We don’t really have room for manoeuvre anymore, but there is, as Cicero says, always hope.

My last two posts in this mini series selecting on the post-fact issue are going ...

I thought I had better conclude yesterday’s somewhat dark with a reference to the value ...