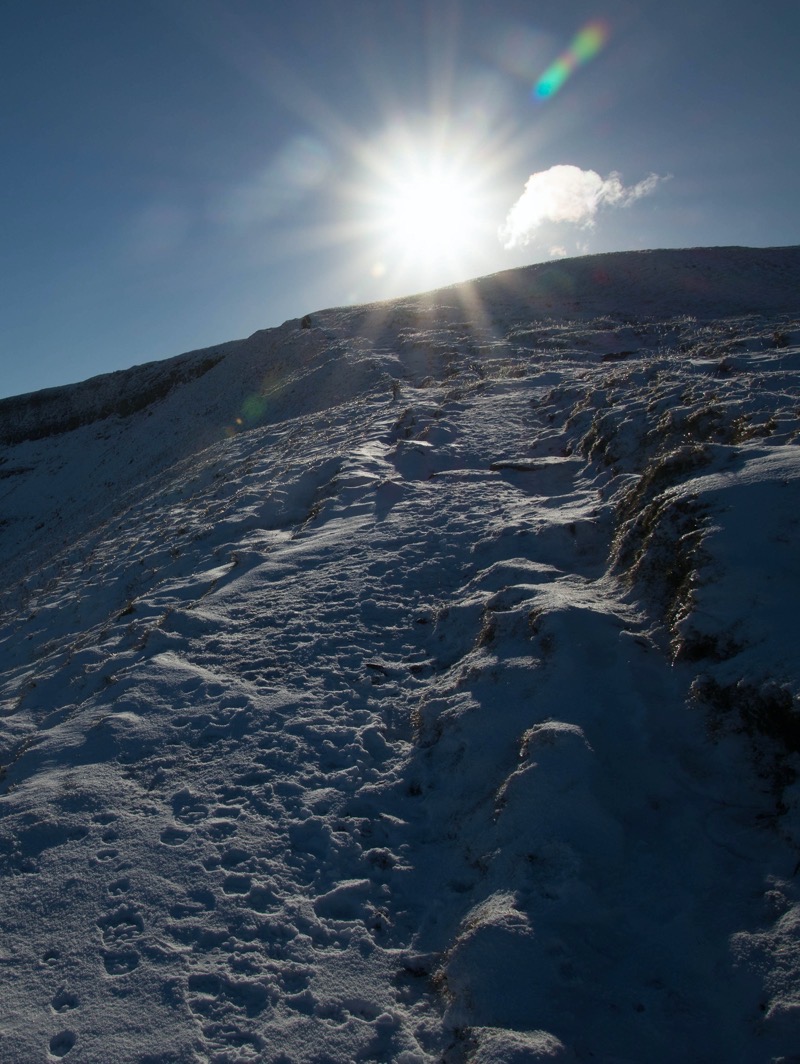 One of my best memories from the year I turned my back on Diabetes is the walk I did after a fresh snowfall in the sunshine on the Camarthen Fan as the year was coming to its end.  The photographs used here come from that walk in which I linked on the tops finally returning the to car in the twilight.  That was six years ago and was a solitary walk.  I returned three years later with friends, again with snow for the ascent from the south, and this Sunday, with Paul, Brenda and Ellie we’ll be attempting a longer walk taking in the ridges to the west.  The plan is to ascend from the north to the col between Piws Du and Fan Brycheiniog and then head west to Carrety Yr Ogof, Garret Las, Feel Fraith, and Moel Gornach to the car park on the A4069.  Starting and good paths and ending up with some rough walking over rarely walked hills.  The mountains of South Wales reward having two cars with the capacity for long linear walks over varied country.

A large part of the please of walking is planning and our sitting room is currently strewn with guidebooks and maps of North-Western England as I am spending ten days walking in the Lakes, Northern Pennines, and the Howgills later this month.  And for a large part of my life, I have been the planner either for myself or people I am walking this.  But this task generally falls to the person who cares the most about it and I have been surpassed in this respect by Paul.  The upside of this is that it is no longer my fault when things go wrong; something I appreciated a month or so ago when we ended up surrounded by dense woodland, bramble bushes and stinging nettles on slippery rocks with the occasional plunge into mud or running water.  Another upside is that the walks are properly researched with side trips to find old boundary stones, ruined buildings, and the like all of which add to the interest.  We’ve also negotiated a tacit agreement in which I am allowed to make some suggestions for variations, although we try and avoid the escalating ‘improvements by email’ which meant one six-mile walk in Snowdonia escalated to a twenty-four mile, 7,000 ft expedition before we both saw the error of our ways.

That leads me to what stimulated me to write this post.   Our walk this Sunday follows a delightful mountain stream to Llyn y Fan Fach (banner picture), one of those magical northern facing corrie lakes that doesn’t see the sun in winter.  I’d added the southern transit of this lake and Piws Du to Paul’s plan which means that I will be blamed for the more or less vertical ascent that involves!  Paul pointed out that the Welsh war poet Edward Thomas had written about swimming in that lake and that trigged a series of memories including one my favorite of his poems Thaw.

Over the land freckled with snow half-thawed

The speculating rooks at their nests cawed

And saw from elm-tops, delicate as flowers of grass,

What we below could not see, Winter pass.

Life is like this if you keep an open mind, read extensively, and have good companions.  The constant making and connecting of things, people, and ideas.  Seeing new possibilities and being stimulated into new ways of thinking.  It requires what I call Necessary Ambiguity the development of which is progressively being hampered by an over structured and over measured educational system not to mention strategic processes and practices that punish not only ambiguity but abstraction.  Art evolved in humans with purpose, it allows us to be inventive to see new possibilities and (a complexity message here) it is in the connections between things that we discover new meaning.  As Thomas says the seasons change and what could not be seen has now reveled.  Spring, like Autumn, is a liminal state, a point of transition but not a place to stay if you want to harvest in preparation for winter.  There are other Cynefin connections as well if you look into Thomas’s history one of which will bring me to the end of this post.

Although he was killed in the first world war and is classed with Owen and others as a war poet, he is at his heart a nature poet, and the bulk of his writing was done while in the trenches which provides an added poignancy to his work.  I had completely forgotten that he was good friends with Robert Frost whose Mending Walls was one of the inspirations for Cynefin.  Frost visited Thomas and they were good friends and interesting the other Cynefin poem The Road Not Taken was originally a half-joking response to Thomas’s indecisiveness on those walks.  Now considered possibly the most popular piece of writing by an American it is also probably the most misinterpreted.  Frost is a great poet in part because meaning in his work is fractal in nature.  It can be easily understood, loved, and remembered but then it has multiple layers of deeper and often darker or at least stoic meaning.  He is popular with both public and poets which is rare.  I can see why many in the US, the font of social atomism, the poem as a celebration of individualism but any deeper reading of the whole poem, not just the opening lines belies that.  It is a poem about pathways and possibilities, about counterfactuals and reality.  It tells us that liminality comes to an end, that choices have to be made and we have to live with the consequences of those choices.  Our traveler takes the “one less traveled by” as “it was grassy and wanted wear”  it offers possibilities of new discovery and at its heart is how we make meaning by the roads and pathways we take literally or metaphorically.

It is a poem for our time with many familiar paths all too tempting and laid out before us.  A return to mass carbon consumption, to rampant neo-liberalism, and all the roads more traveled and more familiar but there is a time to take a different path and as a society, the need for new pathways is an existential issue.  Winter is, as they say, coming …

One of the most painful ever scenes for anyone of a progressive mindset is the ...

The tenth chapter of St Matthew’s gospel has two of the best-known quotes from the ...