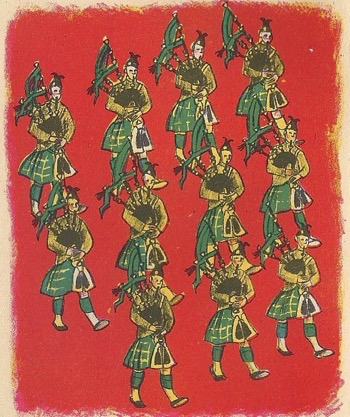 We are probably still in the party theme section of the carol and destined to finish there with a dozen drummers tomorrow. However the Celtic approach references the noisy and shrill Green Sandpiper although why anyone would give that as a gift I can’t see. In some versions (but the number varies) it is cocks a crowing or roosters crowing in polite society. On the religious side we have a retrofit to the eleven faithful disciples which has some possibilities. If you know your New Testament you will be aware that they were a motley crew of sinners who became saints and there is a whole literature on the motivations of Judas. And, of course they were disciples who then became apostles and that journey is an important one. All of this has promise, so for the first and only time in this series I am going to go with the Canadian hymnologist repurposing of the carol and talk about leadership. There are aspects of the story here that are relevant to OD as a practice:

The underlying theme of these Christmas posts has been the switch to a complex systems perspective from one that is more engineering/mechanical in nature. Treating individuals as bundles of programable competences is inhuman, inauthentic and immoral. Complexity is not immune for this by the way. One of the reasons I am considering anthro-complexity or anthrocomplexity as a name for the overall field I and colleagues have developed over the years is to separate what we do from the de-personalisation of people and (critical this) community to agents that can be modelled; and all to common and growing tendency in complexity work.

Diversion from main theme to make a point 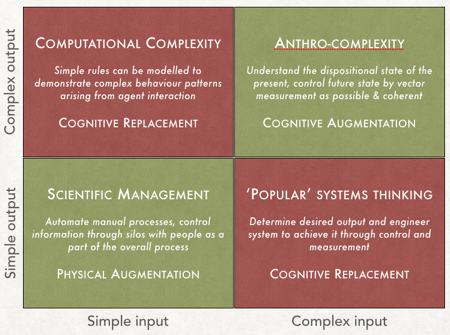 The matrix to the right is an updated version of one I put together with Peter Standbridge many moons ago when I was in IBM for an EU report on knowledge management– neglected then and still relevant now by the way. We also wrote an article on the theme which will give you more of the context. It is a rough classification to make a key point about some of the major trends in management theory. In effect I am arguing (and I will build this in a future post) that Scientific Management (which includes Deming, Ashby and others) has a lot in common with Anthro-Complexity in that they emphasis the augmentation not replacement of human decision making. On the other hand the popular forms of systems thinking and a lot of computational complexity (which includes big data etc. etc.) basically assume you can replace humans with automata of various sorts and types. I’m marking for a future post here, but also making it clear that a lot of complexity work has in effect put put a complexity wrapper around old ideas (the systems thinking guys) or seeking to model the life out of human choice and freewill.

So returning to our lesson for today (sorry couldn’t resist that given the religious theme). Let’s spell out some OD implications:

An afterthought and connection to the theme. The pied piper stole the children of the town when he was not paid. Falling for the seduction of automation threatens a similar loss for organisations.

So the penultimate post complete. Tomorrow I conclude the series, with the hangover ….

So we have a choice between the ten commandments or a reference to cuckoos. As ...

Any mention of drums brings to mind the truly great Ginger Baker and some fond ...