The original plan for today was to walk from Goldcliff into Cardiff taking advantage of the family being together with two cars.   So I reasoned I could leave early (having paid the bill) and leave the Saab at my starting point.  Later in the morning a suitably grateful family (I had after all paid the bill) would move the Saab to a nearby station where I could pick it up at the end of the day.

It was a good plan but it failed for two reasons.  Firstly the tension of the previous day's pick up with cake balancing on knees in a car frozen by air-conditioning (to stop any melting) meant that was was still some residual resentment to my taking one day, let along two for walks.  Secondly and more importantly (I am hardened enough to ignore such petty minded whinging) was that we had a great 90th birthday party for my Aunt Mary the night before, and there was a chance to get together with many long lost relatives for lunch the today.

Mary is my mother's older sister and the matriarch of the family.  The only one who really knows what everyone else is doing.  I try and pop in when I go to Cardiff for matches and I always get a full update on the family.  We are close anyway.  As children the two families spent most holidays together either in Cardiff or Mold, and we shared the family house for a period when I was five and Dad was sorting out a new job changing from private practice to joining the Ministry as a State Vet.  Both sets of children were frequently left with the others for extended periods and there was an extended family set up of obligations and pleasures in Cardiff on top of that. Then, ten years ago now when my father and mother both died Mary was with us in their final weeks.   On my Mother's last day, when we knew she would go that night I made a frantic drive down to Builth Wells to collect her (another Aunt drive her north from Cardiff) to make it back.  She and I cleared the house together some years later.  That sort of experience makes you far closer. 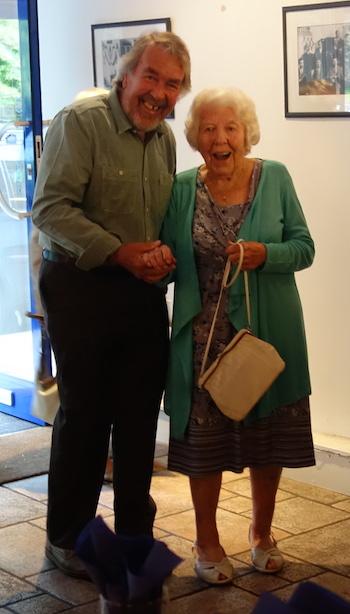 So rather than a record of a walk, this a tribute to one of the most gracious and generous ladies I have known.  She didn't know that we had arranged to all come together and came into the restaurant expecting her children and grandchildren alone, so the surprise was a pleasure to behold (that is her with my Cousin Michael, her eldest and inveterate civil engineer in beach excavations when we were young). She has just come in and seen that there are a lot more people there!

The other good thing was to see my children (and Huw's Becky who was meeting the extended clan for the first time) spending the evening with Mike and Pam's offspring: Ryan now a doctor and pregnant, Ceri back from Harvard and entering Architectural practice.  They last met at my mother's funeral, and before that at my parents ruby wedding anniversary celebration when the elder Ryan introduced Eleanor to hair tongs and removed much grief from my life in consequence.

Aside from the pleasure of getting together, and also meeting some friends of Mary I did not know, there was also a sense of regret.  My mothers generation grew up together in Cardiff.  My generation started to scatter but still came back together for extended periods.  My children hardly see the extended family except on rare occasions such as this.  Such separation is inevitable but it involves loss of some key aspects of identity and support that come with a large extended family.

The underlying narrative of an extended family can provide stability, support and above all a sense of confidence.   I always knew I could at any stage of my life turn up at any of my relatives without notice and be fed and housed.   Also such hospitality would not be an obligation, but a unquestioned gift.  So in memory of that, and in anticipation of when we celebrate Mary getting a telegram for the queen, I will sign off and leave that walk for another day.

Since completing Offa's Dyke Path over twelve days back in March I have somewhat neglected ...

A form of meditation

Today was one of my few days at home which meant a chance to catch ...