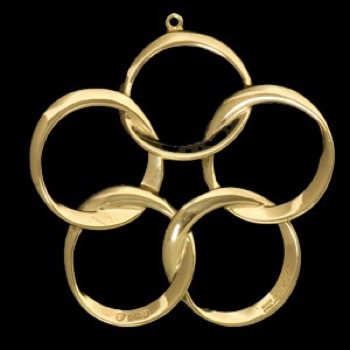 The first five books of the Old Testament, recording man’s sinful failure and God’s grace? Five ring-necked pheasants symbolising fire and sensuality? Five “goldspinks,” an old name for a the Goldfinch? Goldfinches appear in Renaissance art where they are said to symbolise the foreknowledge Jesus and Mary had of the Crucifixion (I got that from Wikipedia but double checked it). A new age web site I found says that the Goldfinch is a sure sign of exuberance, liveliness and enthusiasm in your current world and it’s back to fire and sex in the case of the pheasant.

Now we have a lot of pheasants where I live, exclusively reared for the shoot. Birds of great beauty and stupidity with the latter quality generally winning out. I’ve assisted many of their suicides when they run across the road in front of the Saab when I am taking the back road to Pewsey early in the morning. I’ve also purchased and cooked many a brace in the Aga and they make good eating. Mind you I have never liked pheasants since I misread in the school assembly once and confidently read out “Yonder pheasant who is he” entirely by accident. I should of course have said Yonder peasant, who is he? but being a partial (and in 1972 undiagnosed) dyslexic it was an easy mistake. The problem is that no one believed it was an accident and I got hauled over the coals for mockery and such like. The irony of course is that if a peasant ate a pheasant they would have been hauled in front of the magistrate for poaching. Said magistrate would often be the landowner who employed the gamekeeper who brought the miscreant to court. That is when they didn’t just beat him up in a form of summary ‘justice’. My great grandfather was Head Gamekeeper to the Marquis of Bute and family stories say that his silver topped stick (which is in the lobby of my house) was responsible for a fair number of beatings in its time and for at least one death.

So that gives me my theme, one of poachers, gamekeepers and the abuse of power. In effect I want to talk about justice in the context of change. One major issue that has emerged over the past four decades is a model of the organisation that assumes that its employees are widgets in a machine. I remember during one change initiative in the 1990s being told by a intrusion of Management Consultants that the role of the organisation was to equip with knowledge that would give be a career when I was laid off by said organisation. The idea was that knowledge was something an organisation would rent from an individual rather than evolve over time within a apprentice and training model. It went with the engineering metaphors that required people to be categorised as widgets in a machine. A movement that gave rise to the popularity of pseudo-scientific nonsense like Myers-Briggs.

It had the clear negative effect of people taking the rent idea seriously and only sharing what was bought rather than what was needed. But then we had all the how do I create a knowledge sharing culture nonsense. If you have to ask the question you don’t understand the problem. People naturally share knowledge in the context of need. It is over formalisation of the process and the focus on the explicit which is the problem. Also if you tell me that it is a rental arrangement then I will sell to the highest bidder. Making things a commodity works both ways, something change teams seem to forget. Unintended consequences are inevitable in a complex system but that does not excuse people from blame if they create systems in which the unintended was eminently anticipatable!

So the rent idea is a commoditisation approach, and commodities are about price and quality and that is all. In a service relationship you take more into account and the commoditisation approach simply makes you stack them high and sell them cheap. Companies who learn to compete on the competence and resilience of their staff have a price advantage over commodity suppliers. Something that service companies are starting to rediscover, hopefully before it is too late. But anyone at the receiving end of the modern sweat shop, the call centre, knows the problem.

To add that that foolishness there is something fundamentally inhuman and stupid in seeing people in more or less any role as isolated containers for competences that can be catalogued, injected and deployed at the whim of management. Treating the containers as things that can be laid off at need is oh so feudal in nature. When my great grandfather died of a heart attack the family were thrown onto the streets despite his years of loyalty. He was a disposable commodity. That attitude seems to have returned in the modern organisation. Attitudes, social relationships, experience are all part of the capability of the human assets that remain vital to the modern organisation. Those take time to stimulate and evolve, they cannot be created or engineered. We need to start thinking about the way people interact with others and with customers, physical objects, suppliers etc. etc. We need to stop thinking of people as parts of a machine. Change process, and the OD community as owners of that change, need to understand that memory is a part of competence. Treat people unfairly and they, or those they associate with will remember it. You can’t manufacture loyalty and commitment.

You know how images from some of those stories you read as a child never ...