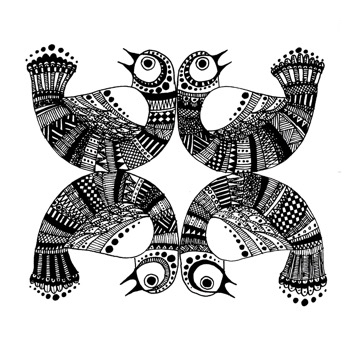 Again multiple interpretations and also adaptations. Calling birds is now common, but the original references birds that are coal-black so ravens, crows or most likely blackbirds. The most prosaic interpretation is that blackbirds were a delicacy (think of the four and twenty baked in a pie) and it was simply a generous gift. The hymnologists appropriation of the carol designates them as the four gospels. In celtic legend the raven is the bird of battle and of wisdom, four is the number of the earth, asleep in winter but a “potent elemental source of power”. I’ve always loved ravens, their calls (and they can express different emotions) are an essential part of walking Snowdonia. I know I am home when I hear that call. In my days studying (as a amateur I hasten to add) knowledge systems in indigenous communities became the focus point or Spirit Animal for mediation. Ravens also outscore chimpanzees in many tests and are tricksters by nature, they seem to exhibit a sense of play. All in all I have a fondness for Ravens and its tempting to use that interpretation, but the meaning is pretty clear and I have to go with blackbird as in the genus and that choice is made easier when I recall wonderful poem A Blackbird Singing by one of the great aesthetics of Wales, or for that matter any other country: R.S.Thomas. It also had the advantage of bringing in the sweet song of the calling bird, a modern North American variant on the carol itself.

It seems wrong that out of this bird,
Black, bold, a suggestion of dark
Places about it, there yet should come
Such rich music, as though the notes’
Ore were changed to a rare metal
At one touch of that bright bill.

You have heard it often, alone at your desk
In a green April, your mind drawn
Away from its work by sweet disturbance
Of the mild evening outside your room.

A slow singer, but loading each phrase
With history’s overtones, love, joy
And grief learned by his dark tribe
In other orchards and passed on
Instinctively as they are now,

But fresh always with new tears..

Now I could leave it there and just encourage OD professionals to read that poem, reflect on its meaning and translate that into action. But I feel I have some obligation but pull out some meaning from my own reflection and continue building the body of dos and don’ts for OD which is object of this Christmas series. The opening verse suggests a sense of evil or maybe just danger about the bird but notes the apparent contradiction of rich music that arises once it opens it bill. Not judging on first appearance is one lesson from that, but also the need to wait for the beak to open and sing before passing judgement. One of the things I have noticed in change initiatives is the desire to see what you want to see often hides harsh reality and damages people in the process.

To give an example of that problem. Many years ago I was working on a post-merger situation in two large pharmaceuticals. The phenomena I observed was that there were two classes of people in the acquired company. One got on with the job, responding to requests for information and generally expressed concerns and worries around the water coolers and in the pub after work. The other group, smaller in number focused instead on the merger process, making themselves omni-present in the change team. Their stories tended to either reflect the language of the change team back to that team (which made them popular) or to indicate lack of a positive attitude in others (mainly rivals). The net result was that people who would never have been promoted in the old company were suddenly elevated to major new roles to the total surprise of their previous managers and sub-ordinates. I maybe should not have drawn this conclusions as strongly as I did however. I then found that the new post-implementation change manager came from that category and he was not best pleased.

Now that was not an isolated experience. I’ve seen the same things many times and it is noticeable that in post merger situations the more bureaucratic tendencies win out. In a merger people are creating common process, so the most common (sic) gains ascendency. In the process much is lost, and the loss and consequences are not understood until it is too late to retrieve the situation. One of the uses of our Narrative based culture scan and other related complexity techniques is to map and understand the informal networks and communities, the cultural patterns of meaning and the trust dependencies of the two organisations. The process stuff is easy, its hard and concrete but the value is in the people and their evolved practice. You start with the hard stuff and avoid the low hanging fruit of process – its over ripe and you end up mired in durian (in joke there).

The final verse of the poem makes this point well. The slow singer carries the learning of the dark tribe in orchards not immediately visible unless you listen. The pace of change means that we fail to listen hard enough, and we are too easily seduced by the siren song of our espoused values and aims. Attend to what is before you tell everyone what you want them to be. In the latter course there is much peril, and if you take it the ravens will await you at the gibbet.

I must admit that this was one of the most problematic of the verses when ...