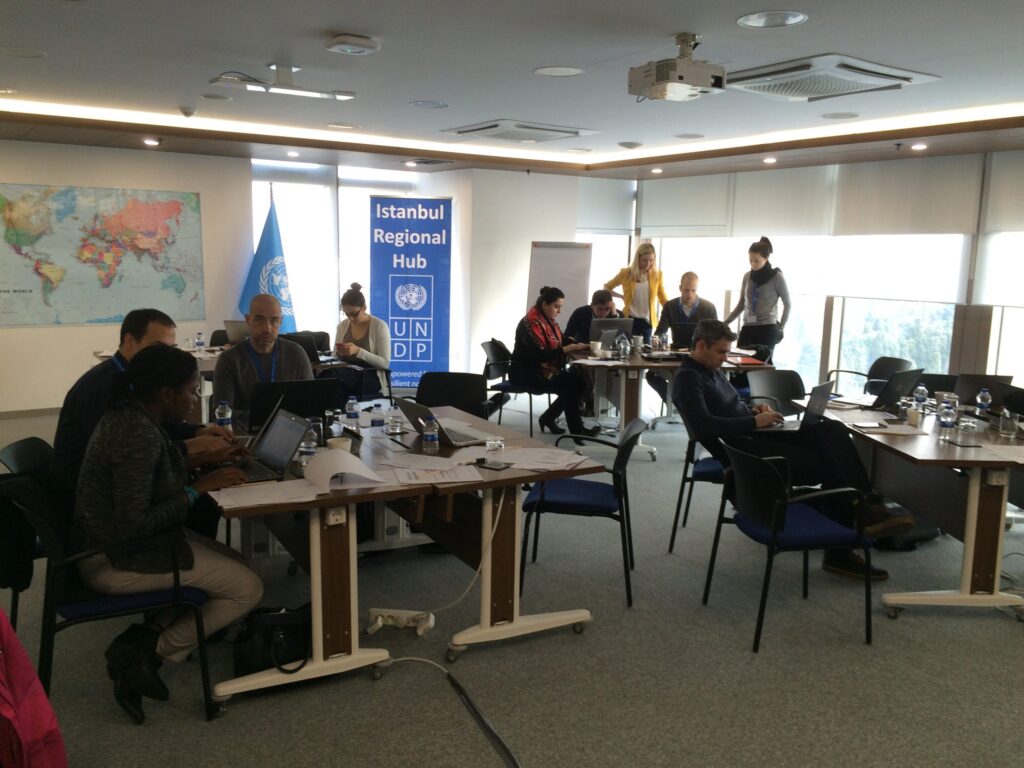 Fragments of Impact – an update

Back in June 2015, we began the Fragments of Impact programme, partnering with UNDP, to explore how to use SenseMaker® in monitoring and evaluation. This week we’re back in Istanbul, with all the various participants to teach and explore the data and what to do next – in terms of interventions, in terms of monitoring and in terms of advocacy.

The programme, open to any NGO organisation, was joined by UNDP teams, the International Labour Organisation (ILO), VECO and UNICEF. (Next time, I hope we’ll see more smaller NGOs joining, but one step at a time.) At our initial June event in Istanbul, we spent a couple of days going through the theoretical underpinnings of why we need to do different things in complex situations, what would be more useful to decision-makers and implementers and what are the necessary elements of running SenseMaker® projects. Working with all the different groups and agendas, we identified three core subjects for research – security and stabilisation; business networks and innovation; youth, poverty and unemployment. And ten different countries that we would be running these in. Exciting stuff.

Immediately after the kickoff, a number of things started to happen:

By September, things were moving – different paces in different places, but moving all the same.

The frameworks were debated and discussed – Anna and I hadn’t quite managed to encapsulate everything, so we decided to build a fourth framework – valuechain exploration. And some countries needed specific extra questions – which brought in the biggest challenge: coordinating frameworks, websites and apps, as Richard Hare, designer extraordinaire, stepped in to start building sites. In fairness, we’d underestimated the time and effort this would take – a useful lesson for next time.

Once the frameworks were finalised, country teams translated the research instruments into whatever languages were necessary – Arabic, Russian, Serb, Bemba, Romanian, Turkish. And the websites were built to match.

Meanwhile, some countries were already starting on collection – in Yemen, paper data was collected in seriously difficult environments. The project lead was cycling to the office at one point, and had to scramble for cover as drones and bombs put in an appearance. Despite all this, they rapidly gathered over 1,000 micro-narratives.

As websites were completed and signed off, collection kicked in big time. Android tablets, iPhones and websites were used to collect directly from people wherever possible. (For Yemen, those papers needed to be entered…)

At this point, the regular calls that Khatuna was holding proved invaluable – sharing knowledge across projects, getting advice on collection problems and more. As you’d expect, some cultures are more open to people collecting information than others – the cross-fertilisation of ideas can be extremely helpful. Bumps in the road are easier to deal with when you talk to someone who’s already further down the road!

So – 26-28 January 2016 finds us back in Istanbul learning about how to explore the data, come up with insights, change people’s perceptions, design and monitor the next interventions.

At this point, we’ve worked with smart, inspiring colleagues in Kyrgyzstan, Moldova, Yemen, Serbia, Bosnia & Herzegovina, Turkey, Zambia, Peru and Ecuador. And the plan is to write up papers on the experiences – and more.  Watch this space…

One of the many wonderful things about Snowdonia is the way the architecture and ...