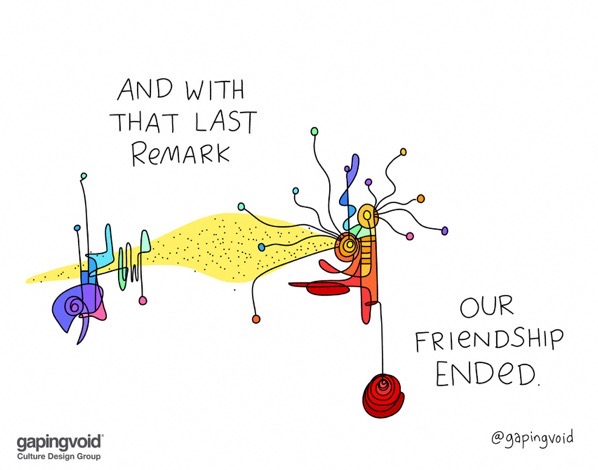 The tenth chapter of St Matthew’s gospel has two of the best-known quotes from the bible: the advise that if you not well received to “shake off the dust of your feet.” and in the context of going forth into the world at risk to “be ye therefore wise as serpents, and harmless as doves”.  Both are appropriate to this follow-up post to my earlier one on rules for engagement, with a particular focus on virtual spaces.  In a sense, this is an endgame post about what to do if the conflict is escalating with little hope or sight of it ending.  Things can now get difficult but to be honest, the most irritating intervention comes from people who break my fourteenth rule” “Avoid delivering moral lectures to other participants in group chats, you are unlikely to really occupy the moral high ground anyway and it just pisses people off”.  Third-party intervention is generally necessary, too many people simply run away regardless of their sympathies.  But if you plan to do this then a simple “This is getting nowhere” coupled with a request for a ceasefire.  Again Wikipedia has this stuff well worked out in that when contention is running rife whole articles can be frozen by an admin so no more changes are permitted.  I’ve put out a provisional protocol below along with some methods and would welcome comments on this as it is a work in progress.

The resolution process outlined below is the serpents and doves quote above.  But it may be necessary for either party or the whole community to simply walk away.  Now, this is often best, and the earlier you do it the less pain.  There are various reasons that you might do this.  The energy and/or repetitional cost to you is high and Bernard Shaw’s quote comes into play “I learned long ago, never to wrestle with a pig. You get dirty, and besides, the pig likes it.”  A more difficult choice comes where the frenzy of the other sides contributes escalates and conspiracy theories come into play, this could well indicate a mental health issue and you should just back off.  If you do leave don’t grandstand, just say you have had enough, offer to explain why to anyone who wants to know, and move on.  “Grandstanding a withdrawal indicates you want to invite the Matthew 10:15 ” It shall be more tolerable for the land of Sodom and Gomorrha in the day of judgment, than for that city” (replace city with the name of the other party.

One key piece of advice – never ever create a new code of conduct during a conflict or in the immediate aftermath, the context is wrong; move on and return later when a wider context has been created; the legal maxim of hard cases make bad law applies.

However sometimes it is irresponsible to walk away; for wider issues with longer-term issues at stake, no matter how sick and weary you are you may need to stick to the task.  Simon Wardley came up with a good tweet on this recently using his imaginary dialogue with his regular interlocutor X (we really need a cartoon here Simon)

X : Well, I now have no hope so I might as well go back to bed.
Me : That’s a luxury the desperate can’t afford. Most people in poverty can’t just lie in bed. It’s your wilingness to throw in the towel and retreat to privilege that must exclude you from leadership.

Now, this isn’t easy.  If I look at the news this morning my own government has just announced the appointment of a self-confessed misogynist and homophobe to represent Britain and The Donald has implied that antiracism training in Federal Agencies is “divisive, anti-American propaganda”.  There are just too many things going on at the moment which indicates that the last threads of commons decency are snapping.  But for those of us in the privileged categories of white, educated, and liberal we should probably realise that we are just waking up to what is the day to day reality for a large part of the world.

So I hope the protocol below is useful, I am looking for comments but let the admonition in Matthew 10: 8 end this post: Heal the sick, cleanse the lepers, raise the dead, cast out devils: freely ye have received, freely give.

A protocol for third party intervention

Make no statement whatsoever about there is right on both sides or I respect you both or similar; these break rule fourteen (see above) and will just escalate matters

Ask each party to list (i) what they think the disagreement is about, (ii) what they think is the motivation of the other party, (iii) what is their motivation, (iv) what really matters here, things that have to be achieved, and (v) what are the red lines.  That should be a private list to you or whoever is mediating and a call to clarify any issues if offered to one, should be offered to the other even if all else is clear.

Compare the two lists, synthesise the material and map compatibilities and incompatibilities.  Fact check any claims as to motivation assuming facts are available.  It is very easy to make an error in thinking some innocent or general comment was a specific insult (I know I’ve lived it both ways)

No one else should jump in with some statement about needed quality X not quality Y etc. against this may just provoke things and you are simply stating something everyone knows in order to look good; as a general principle ANY type of moral lecture, statements that no one can disagree with are all inadvisable, they are de facto judgemental even in ordinary circumstances but i a conflict doubling so.  Make this clear upfront, in fact, a moratorium on all comments is a good idea.

Present the synthesis to both parties for written comments one to one within a tight timescale and you can then identify from that material the following:

If this does not resolve the issue to everyone’s satisfaction (well more their ability to live with it) then the trio method below comes into play.

When it is resolved enforce a no retrospectives, no derogation clause on all parties.  Publish the result and BAN anyone from adding any comments whatever as the temptation to preach will be irresistible for some.  Close the matter and move on.  It’s a good idea to have a lot of high energy non-controversial tasks that people can plunge into.

Here both conflicted parties appoint three or five third-parties whose judgment they trust and you as facilitator do the same.  Ideally not people involved in the conflict but that is OK provided it is balanced on both sides.  From that, you create three or five groups off three (FAD each group will have one person from each party with one of yours).  If this process is anonymous so no one knows who they were chosen by all the better.

Those trios are then not allowed to talk to each other but are targeted to generate ideas for solutions in each of the five areas above which are collated, anonymised and presented back to the warring parties for comment.  The process repeats until you have something (including walk away options) that all parties can agree to

If you are in a wider conflict with multiple parties that have been building competing narratives over time and possibly even generations then none of this will work and a different approach is necessary.  We’ve been building capacity for that and have some PhD and other links and I will outline one approach in my next post.  That may be Sunday but I have a long walk so more likely Monday or Tuesday next week.

Thanks to Morning Brew for sharing the picture of the pigeon and to Tirza van Dijk for the serpent, both on Unsplash.

One of my best memories from the year I turned my back on Diabetes is ...

The banner shot here was taken by me last Sunday in the late afternoon of ...