From Farnham to Shere

So just under two weeks ago I finished the South Downs Way and the question was where next?  The Thames Path and the Wessex Ridgeway are now reserved for Peter and Julia but that leaves a lot of weekends free.    I have the South West Coastal Path underway but that is going to take extended 2/3 day breaks and I need something more local.  So I'm working on the Wye and Severn paths which combined provide a circular route up the Wye from Chepstow to its source on Plynlimon and then over the valley to the source of the Severn and down that river to the finish point in Bristol.  A fair amount of planning there and again after the first two sections a fair amount of travel but I can link it with trips to Cardiff.  But for day outings I need something more local, especially for when I have to end up in London or Heathrow.  So I selected the North Downs Way from Farnham to Dover by way of Canterbury, in the main the old Pilgrims Way made famous by Chaucer and others.

Today saw the first section from Farnham to Shere.  If you look at the guidebook the first three sections are all around 10/12 miles but they are fairly flat so I decided I would compress the first three into two.  So instead of stopping at Guildford I would carry on to Newlands Corner and beyond, descending to Gomshall which had a good bus service back to the starting point.  It would mean a long more or less flat 12 miles followed by a couple of ascents (as shown in the profile right). 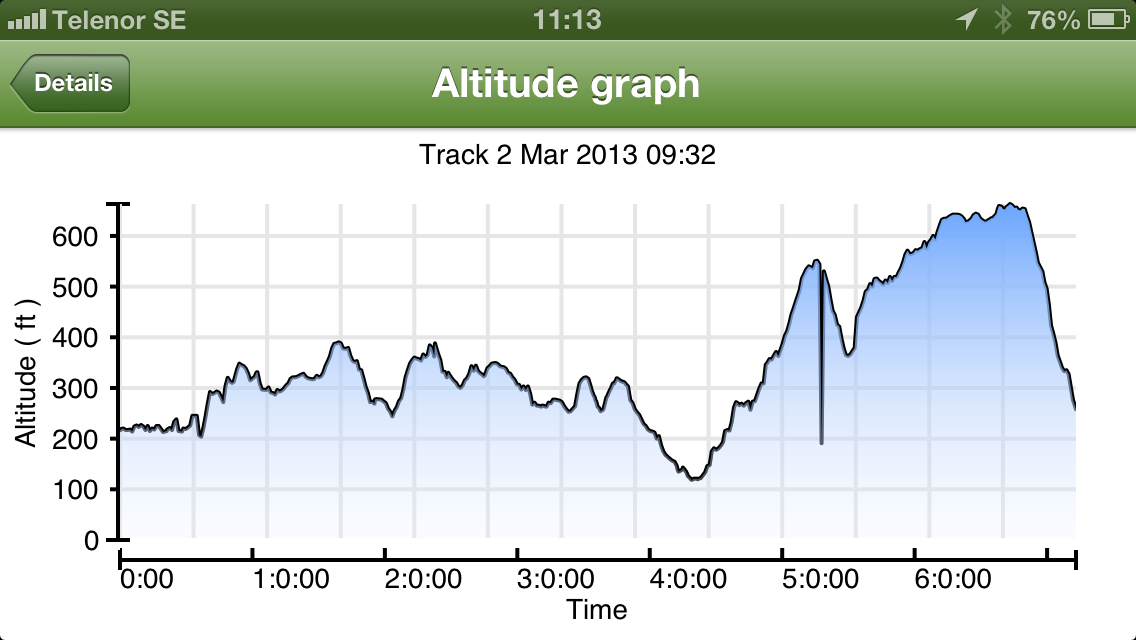 The forecast for today was sunshine and I had to get an 0735 flight Monday so I booked into a hotel near Heathrow and set of for Farnham.  It's not a bad starting point, one of those lovely towns that survive through old buildings and, i this case, not being Aldershot.

It was cold when I parked and no sign of the sun, but the route led out of the town and away from the A31, although the noise would be ever present, so while out of sight not out of mind.  Shortly after the start I came to the sculpture which is the opening picture and marks the start of the way.  There is an equivalent in Dover which is a nice touch.  After that the overcast sky made the walk fairly boring until Guildford.  Yes the woods were interesting but one really wanted dappled light and that was not forthcoming.  Also the sense is that this path should really follow the Hogs Back, but is occupied by the said A32 so instead the path parallels it through the valley.  Good pubs offered temptation which I resisted and when we lived in Send this was a regular trip out for a meal when we could find a baby sitter.  There were two of the gold courses which plague long distance paths in the UK but they were soon passed.

I finally descended into Guildford and the Wey navigation and at this point the sun started to make an appearance.  From this point on I was reversing a walk I did twenty years ago in an early attempt to get back into walking.  I did Box Hill to Guildford one day and resolved to do the rest but young children had to be entertained, and such entertainment did not involve 19 mile walks!   The first climb of the day was steep up brief to the hill top site of St Martha's Church.  By this time the sun was out in full and dog walkers were out in force.  The panorama below gives a sense of the place.

From there it was a matter of dodging mountain bikers heading down the hill and then a final ascent to Newlands Corner.  This used to be ten minutes drive from where we lived and was a frequent trip with children, and it was a pleasure to see the current crop either running around or demanding to be carried up (but never down) the slope.   I needed to push on now as David Gurteen had offered to pick me up from Gomshall so that we could have a chat and I had promised to get there at four.  The guidebook distances had Farnham to Newlands as being 15 miles, but by trust sat nav had it at 17 and counting so I was running late.  The walk from Newlands is a delightful firm path through woodlands on the top of the hill so I strode forward.  But distance and time were against me so I finally cut right to descend to Shere rather than Gomshall and I am pleased I did.  That path was a real delight, the sun setting to my right, trees and pasture and views over a valley already descending into the mystery of a winter's evening twilight. 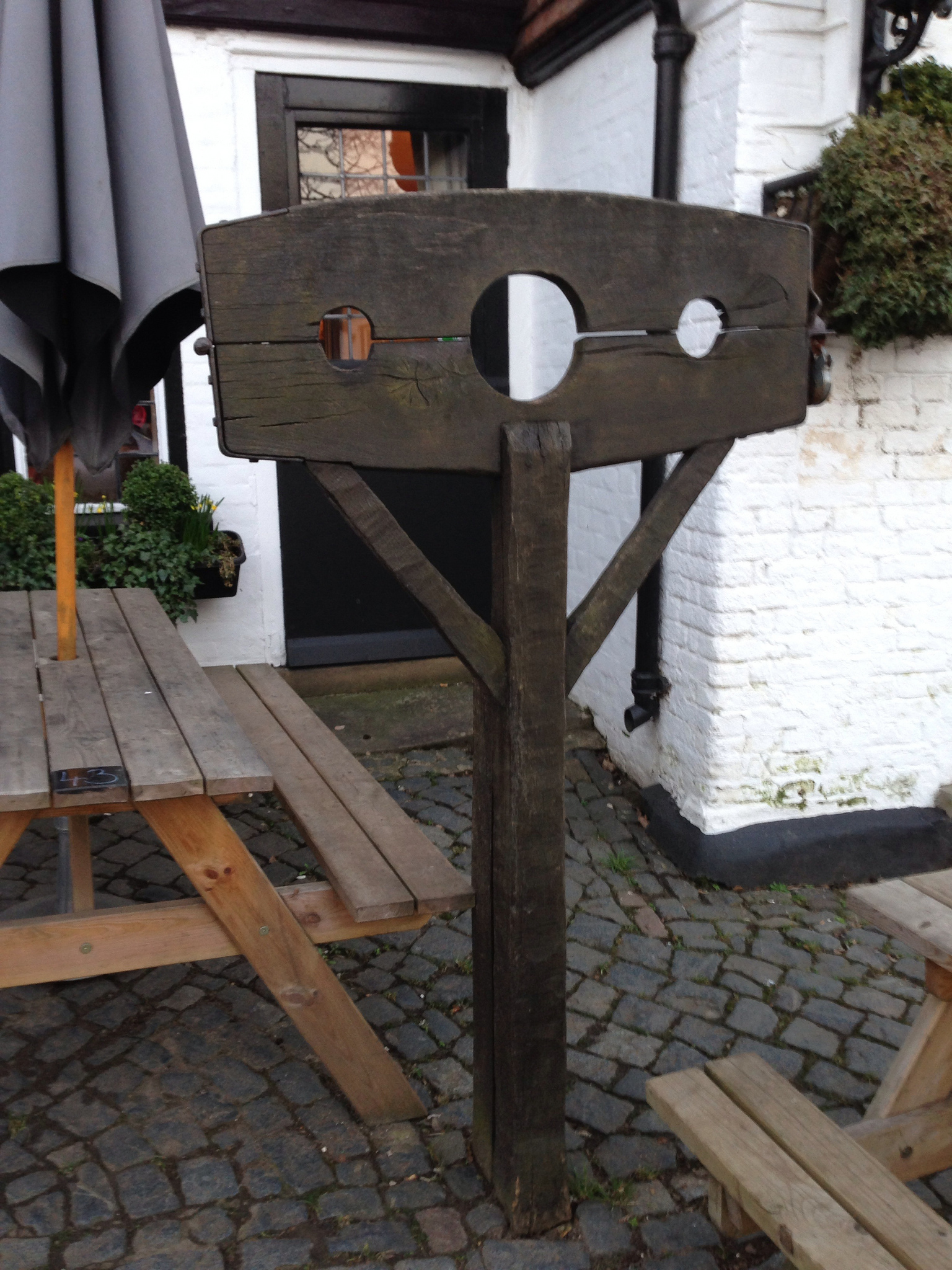 I grabbed a quart of milk in the local shop and quaffed it on the spot and then walked into this picture postcard town to find David ensconced in the corner of the White Horse.  I didn't notice the stocks until we came out a pint or so to the good.  An interesting form of punishment, vilification and shame, although the pillory in London could result in your death as people threw stones as well as rotten vegetables.

Checking the sat nav I had done 19.8 miles which is the longest walk of the modern era and I could have done another hour but for the need to meet.   So I felt pleased with myself and (given I am writing this blog a day late) the stiffness that normally follows a long walk was not present for the fitness regime is working.  That 25 mile walk along the river from Pewsey to Salisbury now looks eminently doable given the right day.

Good conversation with an old friend is a good way to end a long day, and we might be doing some business together as a result which is no bad thing.  By the time I got to my hotel – the old Civil Service College in Sunningdale – I needed the shower and sleep, especially with the alarm set for 0445.  So stage one complete, the next takes me over Box Hill so I must find a suitable way to express my dislike of Jane Austin!

The power went out this morning in Lockeridge and the surrounding areas.  The some what ...

I managed to wake up around ten minutes before the alarm went off which proved ...