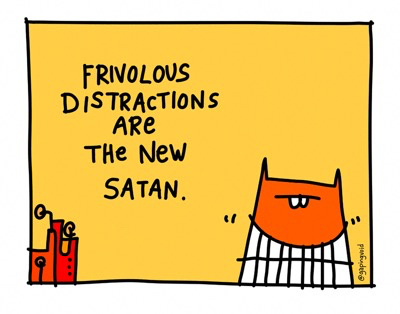 This is the first of a series of occasional posts I plan using English words that have gone out of fashion. I’ve even created a new blog category for these as the idea of using them to stimulate thinking and writing amuses me. My first, Fudgel is defined as the act of giving the impression you are working, when really you are doing nothing. It is an acquired skill best practiced in a hotel room or study with the ready distraction of the internet; although in my case I think I was born with it as I practiced it in the days when work assignments were hand written.

So given this sin, if I ever decide to have a punishment tattoo then I think it will be the Gaping Void cartoon which heads this post. Yesterday I took six hours to complete a two hour task and the actually task completion was heavily skewed towards the end of that period. I had to finish some overdue writing against a final-final (it really is final) deadline and I made it; but I was snatching myself back from sleep for most of the final hour. During the first four hours I was variously distracted by Wikipedia, Facebook, Twitter, the fruit bowl in the hotel room, a few emails, back episodes of the Archers and finally a bath. I tried turning off internet access, but then the iPhone would ping and I would have to open it up again on the MacBook to check what was happening and the whole cycle started again.

I’ve had a few days like this over the last couple of months, well years to be honest, but the last two months have been pronounced. The temptation of frivolous distractions for me at least seem to be linked to high workload periods and the main issue is always getting started on the priority task. Once started it is easy but that always seems a terrible step to take. I faced it last week when I had what turned out to be a one hour task to complete some work for the accountants in time for my tax return While I could have done it (and intended to) any time over Christmas, it ended up being done Friday morning, the last possible day. With the internet down in the cottage that meant wasting two hours getting into Bangor to send it off. That in turn reduced the time for our training walk that day and so on. A fellow sufferer once described the condition as being event driven: until the deadline arrived nothing would happen. It’s not a new condition, I was like that at University Most essays were written overnight before the final deadline. The few times I got one mostly written in advance a final review triggered a full rewrite as I had a new idea.

Now I know other people who suffer from the condition and we are agreed that people who don’t suffer find the condition incomprehensible and get very irritated when they suffer the consequences. They give well meaning advice involving self-help books or disciplines of various types. They suggest apps that will close off the internet to reduce distractions. Then they propose project management or ToDo systems and the like. In other words they recommend the things that only someone without the deadlines disposition (a new mental condition I have invented) could complete. ToDo systems are wonderful by the way, it is a way of sorting all the things that you have to do into a list that you can admire before retiring for the night. I try and pick up a new app for this every six months as it means the red numbers in the icon go away but few things get ticked off. If you don’t understand this then please don’t recommend any solutions, if you do and you have one, then do! On the evidence of my children there is a 50% chance the condition can be inherited so there is a warning there.

A punishment tattoo by the way comes from a classic text in ethics whose name I can’t recall. I did spend some time searching for it on the net as a homage to fudging but without success. It is a short story designed to explain the different theories of punishment and it includes a machine which sculpts the crime on the criminals skin over and over again until they die in agony, aware of their sin. You get things like that to study when you read philosophy. If anyone else remembers it and can give me the reference I would appreciate it. You will also save me from continued distraction …..

It's reasonably well known that retaining more than 5 different things in your memory is ...

I am working on a longer thought piece on the Knowledge Economy following my two ...