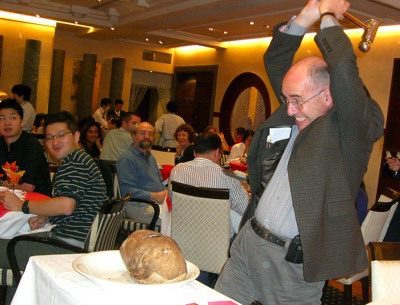 Back in May 2011 I got an email from Max Boisot, pictured enthusiastically engaged in a ritual food ceremony in Hong Kong a year before. Nothing unusual in getting an email from Max; while he was alive I got a lot of emails from Max not to mention the skype chats, multiple cafe meetings and visits to his houses in London and Spain. My last email from him a month later just before he died I will always treasure. It was a one liner: Sometimes, I think that you take me too seriously – nobody else does.

Back to the May email, we had been talking off and on about distributed decision making, weak signal detection and necessary levels of abstraction. I was starting to put together what became MassSense which was trialled last year and will be launched as a service in the next couple of weeks. Some bright guys from the US military I was working with had challenged his mathematics in a paper he had written which I had used in a seminar. Typically he was not phased by the criticism although I’ve just realised he never answered it! It did get him thinking though and he fired back the following:

We make sense of the world through pattern-matching (Cf. Gombrich, the art historian)

The problem for the military and the intelligence services is that they block the potentially most fruitful combinations of experiences and concepts by according a priority to those at the top of their hierarchies. They thus end up as sequential social information processors (von Neumann machines) rather than as distributed social information processors (connectionist machines) and fail to generate enough fruitful patterns for the pattern matching process

Now there is a lot packed into those words and the second paragraph in particular is critical. My insight in how to achieve the combination over heterogeneous agents was the high-abstraction signifiers of SenseMaker® combined with fitness landscapes (the latter following conversations with Alicia Juarrero and Stuart Kauffman). Conversations with intelligent people have two delights (i) you don’t have to compromise what you say (ii) no one worries if they don’t fully understand what the other is talking about. Together those allow for progress.

It was ever such with Max but regrettably we never got a paper out, but we spent a lot of time writing one, talking about writing one and just generally bouncing ideas around. One of the tasks I may now be ready to pick it up is to take the last draft and revise it for publication. In it we put Cynefin and I-Space back together again, one ontological the other epistemological. Cynefin was originally inspired by the iSpace, hence the idea of bringing them back together. We got that paper to the point of submitting it to a major journal but it was returned as being too theoretical with a request to break it into three separate papers and add in cases. Now that would have ruined it and nether of us were ever prepared to play the game of grabbing stories to provide retrospective justification for theories that were sound enough to stand on their own. It is a sin, up there with using software to populate your paper with references to papers you haven’t read to reach some nonsensical target level.

My opening keynote at the Scaling Agile conference in Brussels yesterday got a good response ...

Mary Boone and I spent all day working on our article on Complexity Theory and ...