I’ve been meaning to start a series of posts looking at ideas of flow as they relate to sense-making and that idea has morphed (sic) into creating a series of posts looking at geomorphology as a metaphor, and exemplar in the field.  As I started to map that out I realised that was a severe danger of two many ‘-ologies’ in the titles so I settled on  Geomorph as the series title.   That comes from the Greek for earth and form missing the lógos or study element of the word.   Geomorphology is the study of landscapes and how they are impacted by processes operating at or near the Earth’s surface so this probably means I can use my own photographs as illustrations throughout.  This will be an occasional rather than a sequential series by the way so I don’t know when the next one will come along although there will be some paired posts and this is one of those  You also need to know that I am a frustrated geologist having got fascinated by physical geography at school and spent far too much time hunting trilobites with a fossil hammer in my youth.  So there is a danger of self-indulgence in this series.

Potamology is the study of rivers so that is a good place to start and while rivers cover less than 0.1% of the world’s surface they have a disproportionate impact on human geography in terms of settlement, navigation, and so on.  In a sense, I’ve already started this series a few days ago when I contrasted a river delta with the Milky Way.  The former has high path dependency, the latter represents a different form of stability and change.  I also linked that to the idea of coherence and probably should have mentioned contingency and continuity (there are just so many C words in complexity) but those are the sorts of themes I plan to develop.

A discourse on rivers and canals

In the main rivers arise in mountainous areas and the flow to the ocean and as any geography student knows water then evaporates, falls in the mountain as rain and the whole cycle continues.  All of us who walk know the distinctive nature of the spring line (known as contact springs) on the slope of hills where permeable rock meets an impermeable layer.  Exploring those lines in the Black Mountains of Wales is fascinating and they link to agricultural buildings now generally at a stage of being picturesque ruins. Those springs, in turn, create streams that start to stabilise into rivers and eventually they flow to the sea.  The flow is linear and irreversible in nature and erosion stabilises paths.   A mountain stream is generally a delight of a descending set of waterfalls intermingled with tranquil (and tempting) pools but as the low lands are reached the river becomes broader and more tranquil in nature.  However, the underlying geology may result in spectacular, sudden and possibly unexpected change – think of the Niagara or Victoria Falls. The further up the line of the flow the more options exist.  They are constrained by gravity and don’t, with the odd exception run backward.

Humans play a role in this.  In our cities, we can create artificial banks and install weirs and slice gates to regulate flow.   We manage the irregularities in gradient with the creation of locks that may bypass the river in its more turbulent phases or indeed create novel passages in their own right.  The Kennet & Avon canal which is a key part of my local walks as well as a fascinating path is in the main separate from the River Kennet, but at times they combine and the canal connects the Thames at Reading with Avon in Bath and this connects the North and Irish Seas by way of the Thames and Severn Estuaries.  It is also distinguished by the longest lock-free section of any canal in the UK, immediately followed by a flight of 29 locks over a distance of two miles. 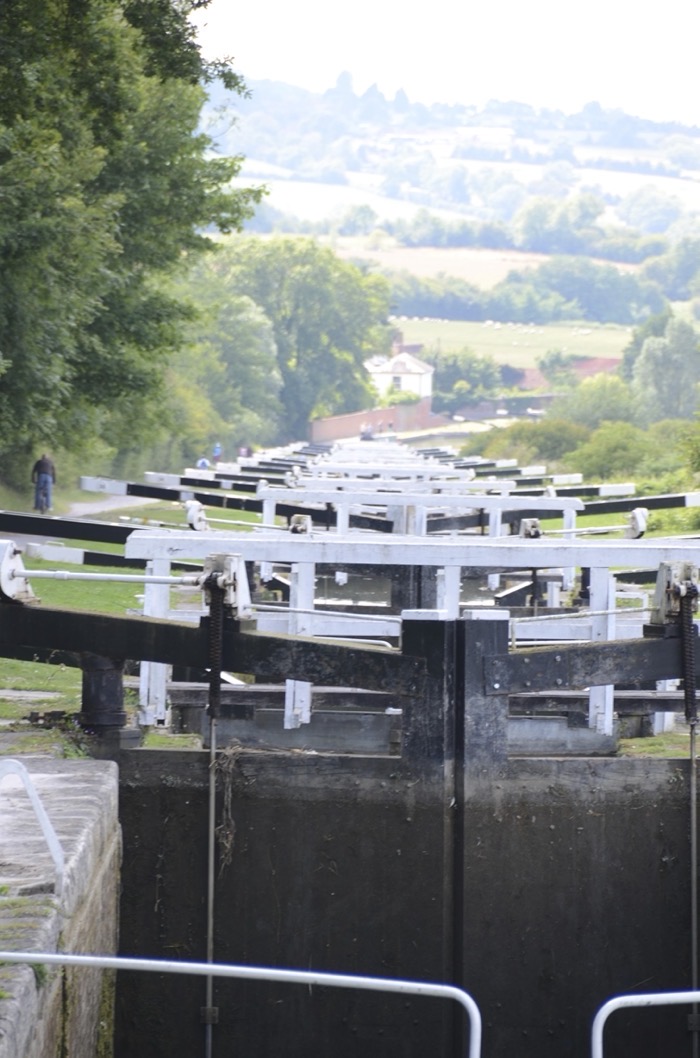 The side pounds required to maintain these have created significant wildlife habitats in their own right and if you choose to take that path this section will consume a full day for a canal boat.  Locks and canals are more permanent and represent a higher investment and maintenance cost than just using the river.

So given all of this, I can see the attractiveness of the flow metaphor.  I’ve previously republished my forward to The Flow System which Amazon tells me is frequently bought together with the Cynefin Book.  I’m in a weekly cadence of signing and posting copies of that at the moment and Avebury post office is very grateful for the business.  James Urquhart’s Flow Architectures arrived last week and I am looking forward to reading and reviewing that.  Most of this is about easing the flow and reducing the drag of linear processes.  A river (as James points out) converts potential energy to kinetic energy via the force of gravity.  I’m less sure of his use of this metaphor to talk about converting an idea or need through increasing value to satisfy a demand for mission success.  I can see that it applies to a lot of software delivery and I can see the links to Theory of Constraints.  But I do find it odd, verging on the perverse (sorry Al) to see ToC as framing for anything to do with complexity which is all about deeply entangled non-linear systems.

Now while a river system is always linear it is at its most entangled at the start and end of its journeys.  The river delta of my prior post and the network of rivulets from which the river emerges all over multiple possibilities through bifurcation and recombination.  Once the river forms and the flow is solid it is difficult to disrupt said flow and attempting to swim upriver, or even cross the river is very difficult.  In that mature phase, some things may be left behind (think Ox-Bow Lakes) and the odd waterfall may create a disruptive act and an opportunity to think and act differently, or to drown.  This clearly links to my work on flexuous curves and the alpha and omega points between cycles at which change is possible.

Of course, the most we invest in making the flow more efficient, the more options we close off and the higher our cost both to sustain things, but more importantly the increasingly unacceptable nature of requests for anything other than incremental change.  It also means that the starting point is critical.  Plynlimon in Wales is the source of three major rivers, the Severn, the Wye, and the Rheidol.  There is hardly any distance between the three sources but the subsequent pattern of flow is very different.  The context of navigation is radically different and the range of possibilities changes radically depending on where you are.

What I am starting to wonder is the degree to which we should use the metaphor (and we should use it) and when we should challenge it.  Scaling in a complex system is through decomposition and recombination and managing connections are more important than managing things.  The flow metaphor allows for one type of linkage, and that may dominate but it is not the only form or the only necessary function.  So in the second post of this series, which is likely to be Sunday, will pick up on that in terms of how we architect both brown and greenfield sites to increase options and resilience.  Gradient change will come into that consideration.

As a quick postscript, and as an afterthought, today’s date is a palindrome and an ambigram as it can be read left to right, or right to left or upside down(if you use an LED script) and it doesn’t change,  unless you are North American of course and can’t accept the logic of dd/mm/yyyy formats

I took the opening picture on the Ingleton Waterfall Walk back in May 2008.  I stopped off as the sun cleared while driving south following three days in the Lake District

The banner picture is of one of the oldest locks on the Kennet & Avon Canal between Reading and Aldermaston, unusually it has earth banks.  To the top right you can see one of the pillboxes from the second world war: the canal was a line of defense against invasion.  The Kennet & Avon walk is the first long-distance path I did when I was trying to get back to some type of fitness and the first where I kept and loaded a photographic record of the journey – something which is now an obsession.   I did it semi backward from Hungerford to Reading although I was walking westward (heading eastward is something all good Celts avoid) but finishing each day at the start point of the previous day but backfilling from a midpoint start and then from the end in Bath.  That was a decade ago and I thought ten miles was a longish distance so it took me nine days in all to do the 95 miles and I balked at a final twenty-mile section to Avonmouth.  In these days of lockdown, I am planning to redo the walk but in four/five days.  It is after all, on the flat …

Things are building nicely for our Exploratory next week looking at the connections between sense-making, ...

The loci of competence

An alternative title for today’s post could have been sometimes necessary, rarely sufficient with the same ...