Good to have few choices 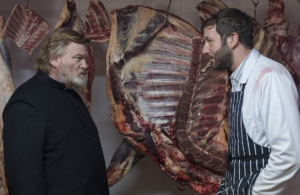 One of the interesting aspects of spending far too much time on planes is that you often see films that you would not otherwise seek out.  OK it can be bad; I ended up watching the Spice Girls Move on one Qantas flight as I had exhausted all other options on two trips to Singapore and one to Australia in the same month.  Ironically a few weeks later I ended up sitting next to Baby Spice in Club but didn’t realise until the autograph hunters started to sneak up from economy.

Either way to get to the point!  Flying out to Los Angeles last week I ended up watching Calvarywith a wonderful performance by Brendan Gleeson and Chris O’Dowd.  Advertised as a black comedy, it is in fact (well in my opinion) a film about redemption, a profound film that asks more questions that it even seeks to answer.  Then on the way back it was Begin Again, picked if I am honest for Kieran Knightly which was a white brilliant comedy, with redemptive aspects and one of the best sound tracks.   Both films had a gentle pace with a story line than unfolded in unexpected but interesting ways.

On the other channels there was the normal action diet of sensation without content or meaning, but it was keeping some people happy.

My little tirade yesterday about the primitive linear causality of Blair's article in yesterday's Observer ...

Last month I had to alter my long standing plan to walk around Wales this ...