Integration and an alarmist implication 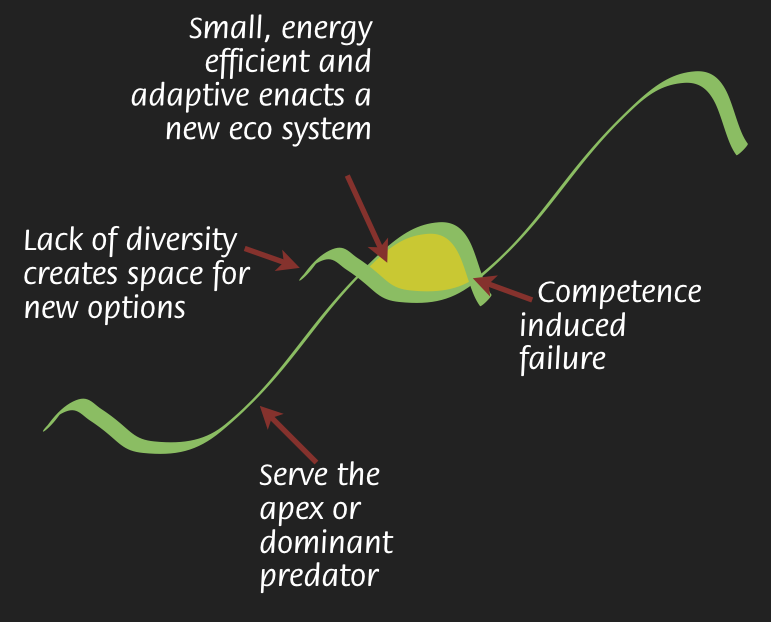 Presenting similar material to very different audiences last week gave me the opportunity develop some ideas and make some new connections. I’ve always done some of my most creative thinking on my feet with much of the Cynefin Framework emerging on flip charts in the context of the right stimulation over the years. Often the ideas that come out are not original per se, but are original in their combination.

One of the interesting things for me at the moment is the way that a lot of things I have taught over the years are starting to come together. They never contradicted each other, but they stood alone. Now I am finding it much easier to integrate so created coherence which is important.

Now finding that moment of coherence is always a little tentative so this post is a speculative one. Comments welcome.

So at the session today I was able to integrate three things: 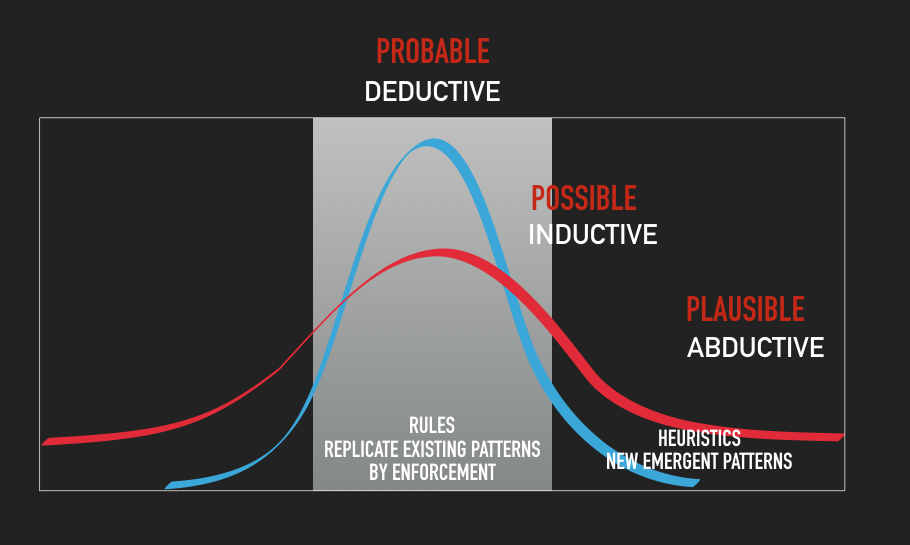 Now I’ll pause as I am going to assume that any reader is familiar with the three in the way I use them. The only qualification I would add here is that I would now draw the Gaussian/Pareto stuff slightly differently. So I’ve recreated that picture here.

Same basic ideas but a better representation. One of these days I will need to re-record a lot of the YouTube stuff. The Apex, or dominant predator idea is the central one here.

So assuming everyone is now up to date …

As we move into the early majority stage of the life cycle of a product or an idea then there is a lot of diversity in the system, with interdependency. As the system matures that diversity starts to be reduced and as the idea reaches maturity diversity is minimal. That lack of diversity allows for new ideas to emerge in the fringe of the system (the early adopters). Initially dismissed and often contradictory one will emerge as the most flexible, adaptive to context and stables the next eco-system. So as the new apex predator establishes itself the variety is reduced and the distribution shifts from Pareto to Gaussian, things become more predicable. But as the system becomes increasingly homogenised the maverick ideas start to emerge left field. We then get a catalytic event which creates mass heterogeneity. Before and immediately after this we pay attention to the tails of distributions and we hit negative patterns early and fast – there is no predictability.

Now this is fractal in nature, it will apply at many levels, from the introduction of a new idea within a company to politics. So let me attempt a depressing use of this to look at the current political situation. The last major disruption was in the 1940s when, as a consequence of post war recovery a new orthodoxy of the state and its role in planning started to emerge. Right wing and left wing parties were no longer the extremes of pre-war society with some common consensus, but still providing choice. As that advances into the 80s with the increasing dominance of neoliberalism homogeneity advances and no can tell the differences between the parties any more. At that point we get activity in the fringes such as UKIP in the UK, the Corbynista faction of the Labour Party. In the USA its Trump and the Bernie-bots. I am been a little satirical of the left here and deliberately, they do not understand populism and tend to loose out ….

So have we now stabilised around ideologically driven demagogues are are there still adaptive ideas that could challenge?

I picked the apex predator example with a ironic twist given global warming, the confrontation of alpha males and the fate of the seal. I’ll try and be more cheerful tomorrow.

4 responses to “Integration and an alarmist implication”

Sometimes one of those viral images on Facebook is just too good not to promote ...

Pubs that have stood the test of time

Returning from Australasia by way of Milan yesterday I was at least home for the ...