Into the valley of …

Euan and I had planned to walk over the Christmas period and we finally settled on today.  I'm on a flight to Halifax, NS tomorrow so the weekend is shot anyway.  Choice of walk was left to me so I nominated the next section of the South Downs Way from Cocking to Petersfield.  Euan then asked if his friend David could join which sounded a good idea.   I added Bob to the list as we had done the previous section a week or so before.  Then Peter got added as well so all in all it was, by my standards a large party.  In one exchange of emails I suggested to Euan that we might have to we might have to wear lederhosen and sing Val-deri,Val-dera as we went a wondering.  Watch the link by the way its great.

The forecast was constantly changing in the days approaching but thing worked out well with no rain, much sun but a lot of dark clouds in the sky to add tone to the various pictures.   We met in Petersfield station carpark and heading for the car park on the way above Cocking.  For the sake of completeness I had to walk back to the farmhouse where Bob and I had turned right – we can't have any sections missed out, even 300 yards.  Ritual complete we set off at a cracking pace up the first hill and I realised that I was not as fit as I thought I was.  Walking with smaller numbers a more gentile pace is possible, with four male companions it was more problematic and I was struggling to both describe what I did and keep up the pace in the first half hour as I walked with David who was the one new acquaintance.

For the vast majority of the walk the ground underneath was firm and there is little more invigorating that striding over download with views to the English Channel on the left and to the North Downs on the right.  The panoramas were impressive as can be seen from this shot, taken with the DMD app on the iPhone.

The long shadow is yours truly and the sun provided some wonderful contrasts throughout the day.  I ended up lagging behind on that first section, in part because I was the only one taking photos.  This proved unfortunate as the rest of the party marched on without paying due observation to way marks and I assumed that they had done so and did not check the GPS.  The net result was a scenic diversion illustrated on the map,

but in all fairness it was scenic and everyone did agree to retrace rather than take the obvious short cut to retain my integrity!  I confess to being obsessional about walking every step of any long distance path.

This downland section followed by tree shrouded lanes with glimpses to north and south.  We saw sheep being taken in for lambing and the arable farmers were already seeing the first shoots of winter planting coming forward.  The Downs are living in landscape, and for many centuries, we passed the Devils Humps, more accurately Bronze Age Burial sites, on the way itself and the views to the north gave sight of many a settlement that went back to Saxon times.  This is a living in landscape and it gives it character. 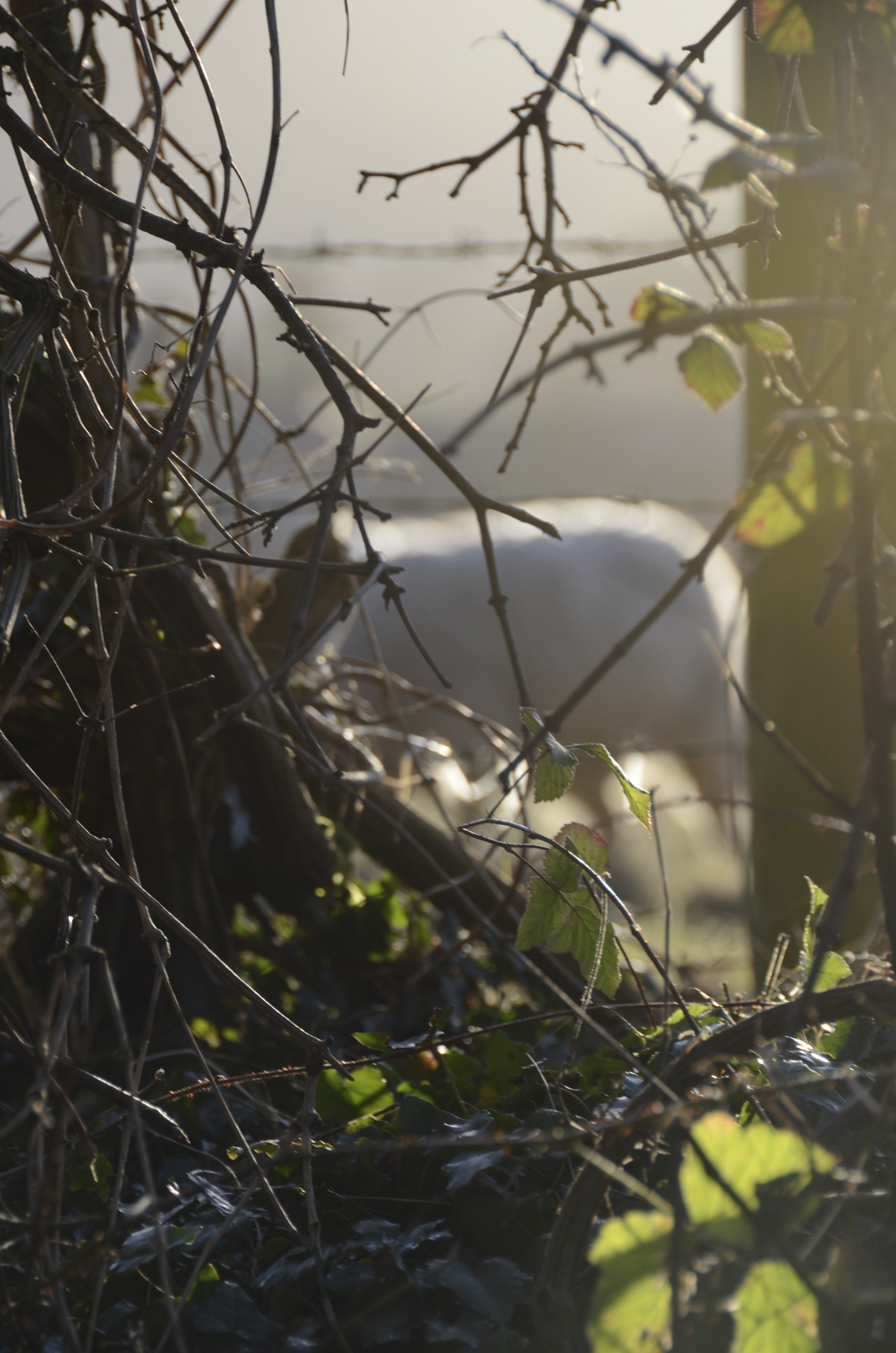 We saw few people however, even the dog walkers seemed to a large part confined to home.

There is an intimacy to this type of walking both with ones companions and with the landscape.  The shot to the left of a sheep glimpsed through a hedgerow is on of my favourite shots from the walk.  You are on an ancient pathway which has seen bronze age hunters and modern farm machinery, its small features tell the story of its evolving present.  All too soon it came to and end as we reached the car park above Buriton which meant we had to leave the way.  Two sections still to go and they will need an overnight.

So we turned right down the Hangers Way to Buriton and then chose the off road route to Petersfield.  The opening picture shows three of the party setting off down the river valley which looked charming but turned out to be very different (hence the title of this post).  Up until that time we had been averaging 2.8 mph, but over the next three miles it dropped to 2.5 for the walk overall as we struggled to find footing in what would be a charming walk in summer, but now was a series of swamps with potholes to catch the unwary.  Later than evening it took me the best part of an hour to clear the fabric boots I was wearing and I resolved to buy new Winter books over the weekend at the Mountain Equipment Coop in Halifax.

The full photo set as ever is on flickr, not as many as I thought but walking with larger groups reduces the time for composition as you see figures fading into the distance!  That of course is OK, the trouble is the conversation is also fascinating.  Walking alone, and walking with friends are very different, both attractive, but different.

One of the questions I frequently get asked after a conference or meeting is What ...

I recently provided a brief summary of the various book chapters that contain my writing. ...