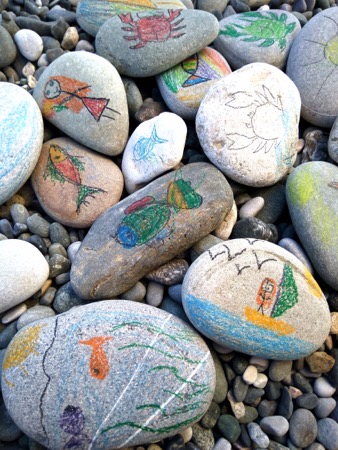 Many moons ago I formulated seven heuristics to guide the various processes of knowledge management and they are as fresh today as when I formally codified them back in 2008.  They are often quoted and sometimes practised.  Regrettably, they are also at times quoted to support practices and approaches that they contradict, but such is the nature of work.  All of them in various ways are active not static concepts of what knowledge is.  In the second major Cynefin article, I talked about knowledge as being simultaneous both a wave and a particle, but of course, in quantum physics, it’s the particles that we actually see.  Carlo Rovelli in Helgoland has a nice way of extending this when he says: The life of an electron is not a line in space, it is a dotted manifestation of events, one here and another there.  Events are punctiform, discontinuous, probabilistic, relative.”  Even energy is granular.   He also summarises Bogdanov’s view to the effect that “Social life is the organisation of collective work.  Knowledge is the organisation of experience and of concepts.  It is possible to understand the whole of reality as organisation, structure.”.  In quantum mechanics, as in complexity science, how things interact with other things is what is important; knowledge is social or it is nothing.  I’ll return to Rovelli at the end of this series.

Now if we go back to the early days of knowledge management it is very much seen as a line in space, an assent that can be codified and catalogued and represented on the balance sheet.   Going back to the start of the movement,  intellectual capital management was embodied in Leif, Tom and Nick.   Other initiatives that became a part of the wider KM Field were those associated with Intellectual Property with Gordon,  Knowledge Cafes with Liz and later David, Communities of Practice with Etienne and Richard, and Patrick on taxonomy.  Then we have Larry, Tom, Bob (Buckman) and finally Nonaka with SECI and the incomplete reading of Polayni on the nature of tacit and explicit knowledge (from which much grief originates).  Nonaka didn’t start the movement but did trigger the popularisation. To be clear others were involved. I’ve only named those I count as friends.

One of the strengths of knowledge management was that it came from multiple sources, it wasn’t a single approach based on one book with one guru.  The whole nonsense of standards and certification scams is reducing that diversity which maybe one of the reasons that KM is rarely a strategic function these days.  Back in the early days the Chief Knowledge Officer was often on the main board.  Sense making and complexity have a similar diverse background and this leads to resilience but the danger of homogenisation is always there.  Part of the problem is that people who want to write standards or create certification are the last people who should be allowed to do either as they dislike heterogeneity and what I called many years ago messy coherence.  .

Now, with the considerable benefits of hindsight, I think the idea of intellectual capital may have caused more problems than it solved.  At the time I thought the value was that it would gain attention.  After all organisations tend to value assets more than they do people. So taking about human and intellectual capital might help a bit.  But in practice it just depersonalised and over structured what was a fluid and dynamic set of capabilities.  Even back then  I never bought into the whole tacit-to-explicit movement, that was just wrong from the get-go.  It focused on the thing, not the uses of the thing and also didn’t realise that the nature of knowledge is always contextual.

Now in developing Cynefin, with its emphasis on informal networks to connect silos and also as the substrate from which more formal communities could be brought forth, I was concerned with both the flow and change.  That created a need, to map knowledge in the context of its use. And to do  that my IBM team created an assembly of of methods including DecisionMapping, Dependency Matrices, ASHEN and Cynefin categorisation.  The net result of which was a portfolio of pragmatic projects that in turn spawned our interest in narrative which post IBM produced SenseMaker®.  I haven’t linked to that assembly as I want to update it and we have organised a Quick Start for organisations who want to be mentored through the process.  I’m going to summarise it in the next post, or possibly posts.

Another set of materials on knowledge management is the three posts starting here.  Also, there are some fairly deep ideas summarised above which I will expand on the Quick Start and, over time, on this blog.

I wanted to wait until after I gave a presentation on leadership to complete this ...

My last post linked to some of my prior work on knowledge management (KM) but ...