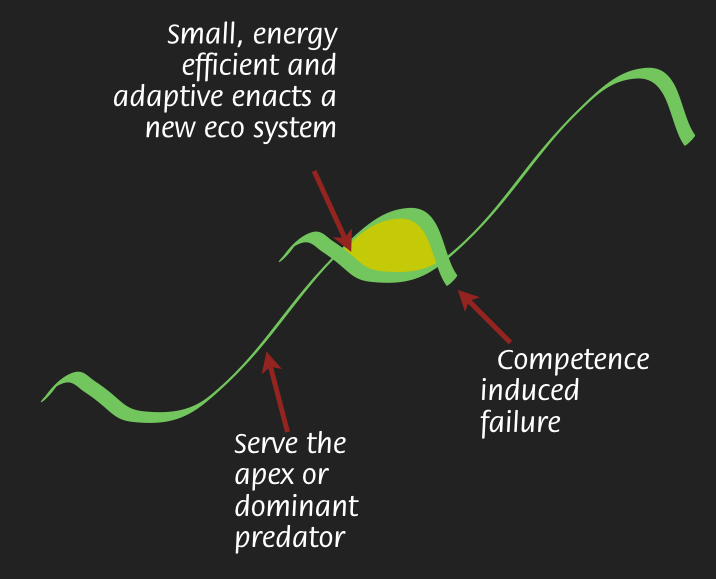 I’ve been developing an flexuous approach to understanding strategy for several decades now. A part of that approach has involved the whole question of niche construction, trophic cascades and more importantly dominant or apex predator theory. At the moment it is a series of scattered posts, two of which I have referenced here, that need to be woven together into something more coherent. But for the moment the fragments will continue while I work this out, and potentially link it into some specific instances of SenseMaker®. Today was the second of two days teaching a masterclass on complexity in government here in Ottawa. It will be repeated in Wellington next year and them will become a standard course that can be taught by others, of which more tomorrow. Today I focused on the contrast between the wolf, the jackal and the sheep. The title of this post comes from Virgil by the way.

Now I have provided links to two key posts on this subject, but let me make the point anew. During a period of stability any eco-system has an apex predator around which the eco-system organises. Remove the apex predator and many unexpected consequences result. The Yellowstone story referenced in one of the links makes this point well. Reintroduction of an alien predator such as the Cane Toad in Australia is disastrous, but a previous native predator is a different matter. Wolves in Yellowstone and hopefully one day in Scotland (to follow beavers) makes sense in terms of overall resilience within the system. There is a strong lesson there for government and governance, alien forms of massive intervention have unintended consequences that are likely to be semi-catastrophic in nature. I talked today about imposing league tables on educational achievement based on models of coaching and information retrieval being potentially dangerous, while focusing on the generalist, liberal humanities tradition of the UK and Canada could be beneficial, something we have lost to our great detriment in my view. There is a clear link here to a key aspect of complexity theory, namely that small changes magnify quickly into major impact.

Now that relates to a period of stability, but when instability hits matters get problematic. The old ideas have reached maturity and the ecosystem is changing faster than can be understood or comprehended. A situation that applies in our current day more than before. Ecological pressure (this is probably the worst four years in the history of the Earth for a climate change denier to seize the Presidency of the US), population pressure, the collapse of neoliberal ideology, the eco-chamber of prejudice that the internet is becoming; all of these represent a major shift in the eco-system. At this point a low energy cost, adaptive entity can stabilise a new ecosystem, create a new way of thinking. The problem is that this may not be for the best. We may be about to see a world wide shift to populist fact-free demagogy as the new norm but it doesn’t have to be that way. The argument I made in what was an impassioned opening discussion was that small nations or peripheral nations have the potential to do this while the major powers fragment around us. But to do that requires action in the present, not a wailing and gnashing of teeth in frustrated impotency. But any such change will be co-evolutionary, bottom up and top down, changing the dispositional state of the system to allow better things to emerge rather than the neo-colonial advocacy of a alternative ideology.

For small nations, the question has to be wolf or jackal, to the the apex predator or a scavenger. For the sheep, well that is an interesting question.

As promised yesterday I will return to the issue of constraints and constraint mapping in ...

For one reason or another I’ve ended up talking about various social innovation labs in ...