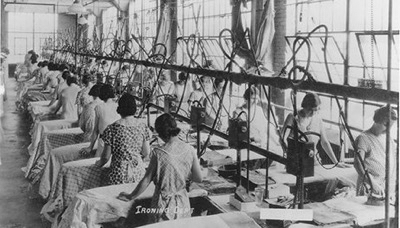 It is fashionable in systems thinking and complexity circles to use Scientific Management as the demon by which sainthood is defined. In my early days in the field I also tended to do this. The first shock to my system was when I made the mistake of expressing that sentiment in the presence of Peter Drucker and got the I knew Fredrick Taylor response which rendered me into a small pool of humiliation. He took pity on me and in subsequent work together saw much discussion of the links between complexity thinking and some of the greats of scientific management and (to fair) the early days of Systems Thinking as it is not a clean break. Deming and Ashby in particular were of interest and in the latter case there was a growing link with Boisot.

These days I see it as more important not to reject that work. If you look at the pattern of Scientific Management the process of manual work is automated and regulated. But the role of management and human judgement is still privileged. Apprentice models of leadership predominate as it is assumed that experiential knowledge is a necessary part of management. Now in the popular forms of system thinking we get a major switch. Process Engineering, the growth of spreadsheet based approaches to personal management and increasing focus on Big Data and AI all seek to replace, not augment human judgement.

In contrast those of us involved in anthro-complexity (my name but I claim no exclusivity or ownership of the field) are also seeing human judgement as key, with the role of technology to augment but not replace that quality. So we can see strong similarities between Scientific Management and Anthro-complexity and maybe a higher contrast with the popular forms of systems thinking; for the Hegelians amongst you Thesis, Anti-thesis and Synthesis. What it does mean is that work needs to be done on judgement, but also on looking again at Deming and Ashby from a complexity perspective. I’ve done some work on both but there is more to do as soon as I have the time.

PS: Oh, and to add to judgement we also need to look at human dignity but that is definitely for another day

Today was interesting in many ways. It is St David’s Day and the 12 anniversary ...

For many years walking in Snowdonia was a regular weekend activity. The drive through Ruthin ...