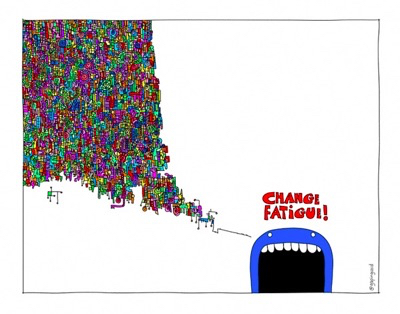 I haven’t opened a post here with a Gaping Void cartoon for a bit so stuck for a subject capable of being produced on the train from Milton Keynes to Bangor I sought inspiration and came up with this. At a presentation this evening (it will go on line) I talked about the need for Agile methods and tools to deal with things as they are, not as people would like them to be. That lesson applies to more than the IT developers within the Agile community, it applies to anyone seeking to achieve things. Regretfully, it is a truth universally acknowledged that any Executive in possession of a new organisation must in want of a change initiative. The other variation is rebranding the company when a new CEO takes over. The latter is the modern equivalent of pissing over the trees to mark out your territory, the former the token nip of the throats of the rest of the pack so they acknowledge your leadership.

You can probably work out I am not enamoured of change initiatives. In part that is because have spent some 40 years working in and with multiple organisations I only remember the unintended consequences (generally negative) of the many initiatives I have been subject to, and from time to time a reluctant participant as part of playing team. In all of my experience the pre-existing culture, an emergent property of peoples actions and interactions over time, continued in other than traumatic circumstances. Now before you start to think that I am bitter and twisted (I’m not but I am a cynic) I know (i) that it is not just my experience and (ii) the most basic understanding of complexity theory says that it won’t work anyway. A complex system is dispositional not causal, so you can influence its evolution but you can’t engineer it. You start with how things are are try and nudge them in the right direction. That way you will discover things on the journey that you didn’t know you were looking for. Some of them will be opportunities, some threats. It also means that you will be doing small things now, so the inevitable unintended consequences will be manageable.

If a few more executives made small changes now, and then celebrated the results the world would be a better place. At the moment then announce a change, celebrate how it will be then start to complain about lack of commitment when the goal is inevitably not achieved.

I had a long drive from Hull to the Arms Park today to watch the ...

Today was interesting in many ways. It is St David’s Day and the 12 anniversary ...