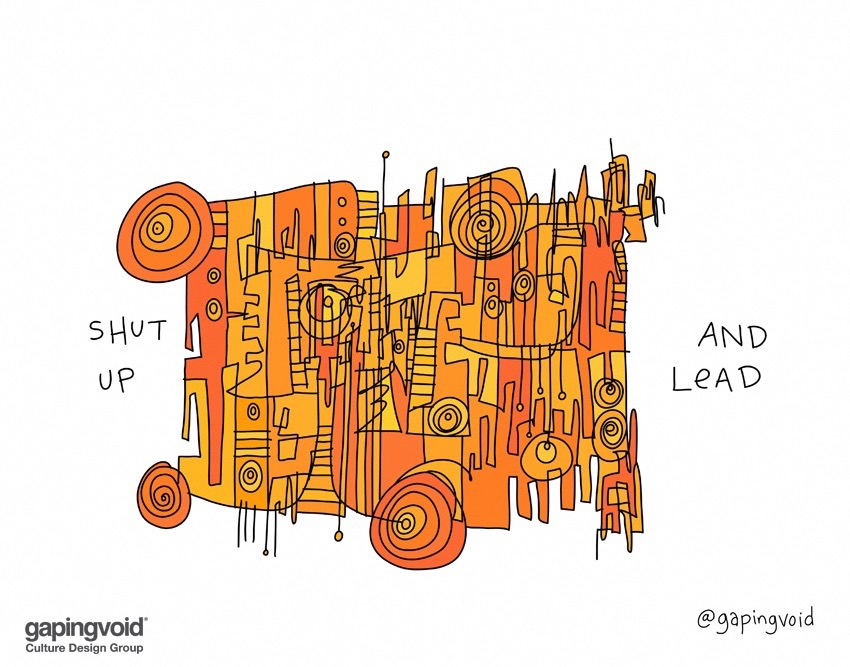 I’ve got a lot more posts lined up in the Alice series, but I’m going to interrupt as the mood takes me and the overnight Gaping Void cartoon picked up well on my theme of yesterday; namely the need to actions that allow desirable culture or ‘mindsets’ to emerge over time. In a sense this is also a part of the Alice series as I want to address the issue of switching culture from managing to leading. One of the general problems of making Agile into agile, is that IT are generally pre-disposed to follow structured methods such as Scrum, some people in HR and marketing also have that culture and have been early adopters. But strategy, business management, R&D and strategic marketing are far more messy and generally have have greater cognitive diversity in the actors.

One consequence of this is that, when you can’t rely to much on structure that trust and empathy come more into play. In a very real sense you are only as good as your last refusal to betray someone’s trust. So much depends on a handshake and a sense of obligation to a network that we have to think about problems in very different ways. Let someone down, event with good intent or possibly with no intent whatsoever and the damage to your reputation is pervasive and often goes undetected. People become more circumspect, they want more formal confirmation before they move forwards (which costs time and energy), your ability to make decisions quickly is lost. So the ability to show empathy, to realise that what is obvious for you is not for someone with a different background and history, to provide space for necessary differences is key and its where a lot of people fall down.

The other thing you start to realise is that influence is more effective than instruction. Assertion rather than negotiation means things are increasingly done behind your back and you are presented with faits accomplis; and of course that results in more worry so more control and so on in a vicious cycle. I have been both perpetrator and victim of this over the years so I speak with the benefit of several scars many of them self-inflicted. In a complex world, and that is where management becomes leadership, the more you say no, the more you issue instructions the more you have failed. Now you will fail, which means you will need to do these things, but the direct order is a last resort. Letting people learn, providing small corrections and above all asking questions that get people to think about their decisions work. Making decisions for people or telling them why they are wrong is, while sometimes necessary, less successful.

Leadership is about navigating an estuary both to the open sea and to a safe harbour. There are many shoals, shifting sandbanks the the odd granite cliff. The weather can be tempestuous, and there is constant danger of running aground. It’s fluid, problematic and not susceptible to order but you need a sense of direction. I found this very, very difficult to handle in my first General Management role and I got it wrong more than I got it right. I was lucky in having three good mentors before I hit the bad boss and I learnt a lot from them. They were adept at getting things done without talking about it or issuing too many instructions. The other thing that worked is when I tool the whole team away for five days in holiday cottages eating the local pub and doing crazy things like horse riding, canoeing and bouldering down waterfalls. I got told more truths during those activities than in any review process and I also learnt the value of service. I got up an hour early every morning and cooked a full breakfast for everyone – and I washed up afterwards. I’m still not sure why I did that but it worked, it became a ritual and helping me became a privilege not a duty.

More on this theme in the future. I’m thinking and playing with updating Cynefin around leadership, beyond the HBR article. So metaphors, stories, heuristics and examples of what not to do become more important. Learning through failure is always the greatest of learning and I’ve had my share.

But back to the title. I remember criticising Steve Denning’s book on Radical Leadership’ as trying to shoehorn too many leaders into one set of platitudinous recipes. To me the only thing that all of his examples had in common is that the individuals displayed integrity to a particular way of working, and had networks of people they trusted to support along with an ability to listen to criticism even if they rejected it. Well maybe the last was not always there (and I speak as someone who had a pile of books thrown at him by Steve Jobs) but the others are common. To thine ownself be true, but there are boundaries of the self that you have to grow out of. Neither Theory X or Theory Y management work – there are a senseless dichotomy, but the ability to know when to change style is key and to build personal integrity and trust in key relationships.

The top picture, of the Dovedale stepping stones in Derbyshire is by Mark Hughes and is used under a creative commons license

… and reduced the answer to shillings and pence

The picture is of a doctor wearing a plague mask. The mask is to protect ...

For my generation one of the seminal television programmes was M.A.S.H, one of those cases ...