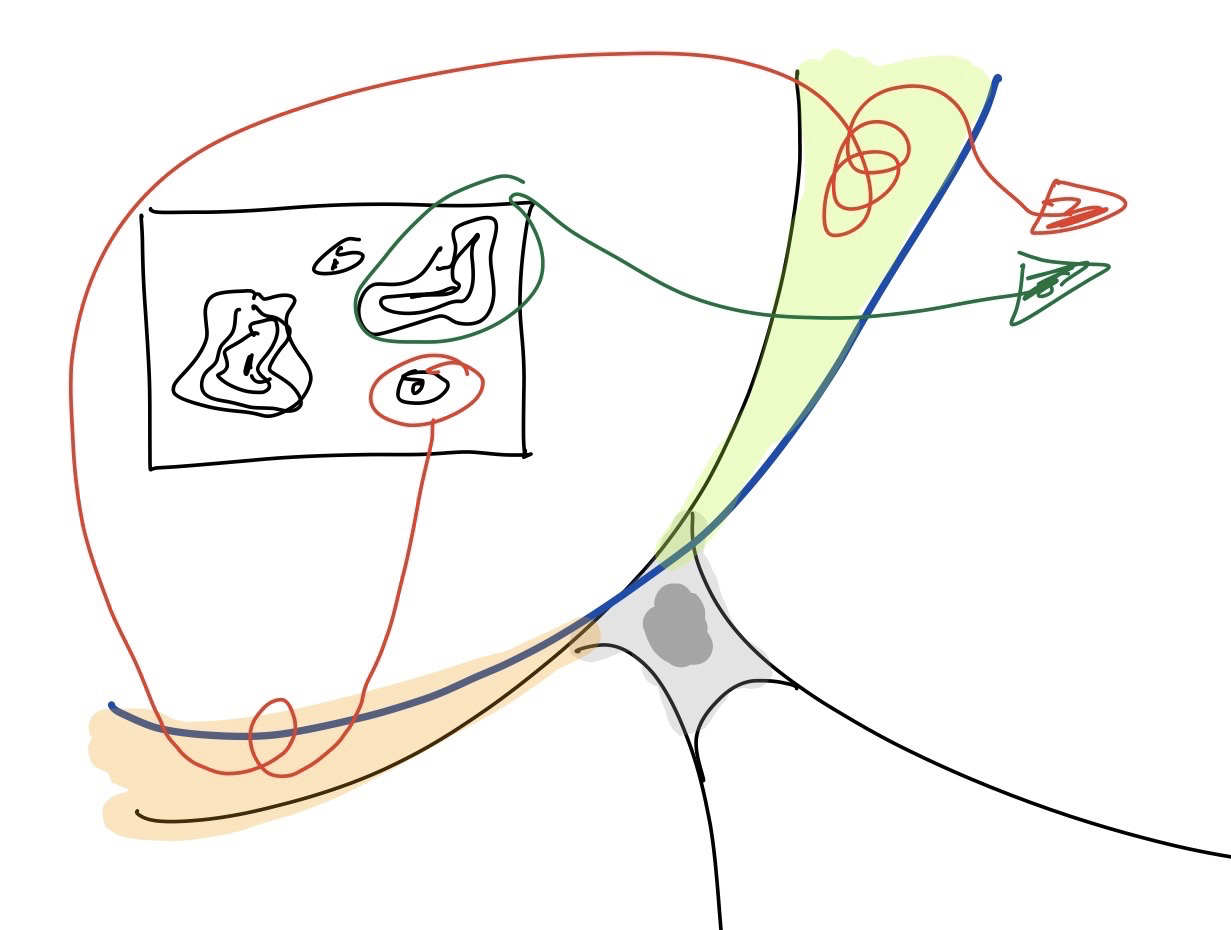 I was originally going to move on to post about constraints but a early meeting this morning involved a stimulating discussion with the senior partner of a law firm and as a result I’ve going to carry on from yesterday’s post and return to constraints tomorrow. In that meeting we were looking at how to do strategy in the complex domain. As a part of that conversation I drew the liminal version of Cynefin and combined it with some recent developments of what we call MassSense; the ability to gain multiple perspectives on a issue in near real time. Doing that with an intelligent and cynical (the good guys are always the cynics, they care) audience was useful and I continued to think and develop the ideas while drinking a much needed long black following a 0700 start! In a subsequent meeting we started to link all of this with work on leadership journey and 360 feedback so a lot of things came together.

For the moment I will focus on the use in strategy and start with some basic principles. If we are dealing with complex adaptive systems then we can’t plan to a desired future state (which doesn’t not mean we can’t have a sense of direction). The whole planning paradigm that grew up in a few decades ago, exemplified by the early Porter work, focused on clear analysis and strategic focus with proper role and and control of plans. Nothing wrong with that for aspects of an organisation or market that has a sufficient level of constraint to create repeatability – i.e. the complicated domain of Cynefin. But in the complex world things are different.

There is then a related set of issues with the whole planning approach in that it tends to be top down with engagement a matter of communication and persuasion. Aside from the ethical and other issues I would argue that there are pragmatic arguments against this approach in terms of engagement to gain minority views; the ideas that are not mainstream but which may contain a germ of truth. Somewhere in both organisations some people are thinking differently and may have the germ of an idea which would provide major strategic advantage. The problem with most planning cultures is that advocating a left field idea is career limiting and even if senior management are open, subordinates may not think they are. Surfacing outlier ideas is more important in strategy than accepting the dominant or consensus view. In practice a lot of organisations have understood that, but instead of rethinking how they scan, they hand over responsibility to the great leader.

So lets take a look at a different approach; and I reserve the right to amend this over time. This also needs SenseMaker® and high abstraction signification to work but it is building on existing work – all the elements arise out of practice but the assembly here is novel. Open to working with network members and their clients to develop this. So for the moment, pending a more elaborate white paper, here are the steps:

In all of this we are seeking to change the energy gradients of the current state to one favourable to us, unfavourable to the competition. Picking up on my earlier work on apex predator theory this is different, depending on if the eco-system as a whole is stable or itself subject to perturbation. In the former case we work within the constraints of the system which evolve around and with the apex predator. In the latter case we inject experimental, low energy experiments to see if the new ecosystem can stabilise around our capability, or our adjacent possible capabilities.

Through the process we are constantly presenting and representing material to our networks of employees and partners to validate the approach and prevent pattern entrainment that is an inevitable consequent of small group interaction – or the pre-formed patterns of the large consultancy firms.

Now I plan to write that up in more detail, but that is the essence for conversation, questioning and practice.

One response to “Liminal & situated strategy”

Liminal Cynefin, stepping over the threshold

I’ve been frantic the last few months with a lot of long standing wishes and ...

I've been developing a theory of constraints both as a method for strategy mapping and ...